I paid $17 to watch 2 hours of Coca-Cola advertisement, then I went home and, apparently, inspired, made a video and wrote a post about Coca-Cola myself (read: created advertisement) absolutely free of charge. Now that I write it down, it does sound crazy, but visiting the World of Coca-Cola in Atlanta was too tempting to skip. And that is given the fact that I never drink Coke.

Do you realize that thanks to the ads to which you were exposed your whole life, you can now recognize Coke by the sound of it filling a glass or by the shape of the bottle even if it has no label? I realized it just outside the doors to the World of Coca-Cola where, instead of music, the sound of Coke being poured into a glass is playing on repeat. That “shhhh” sound of carbonated drink hitting the ice cubes and raising to the brim is unmistakable. 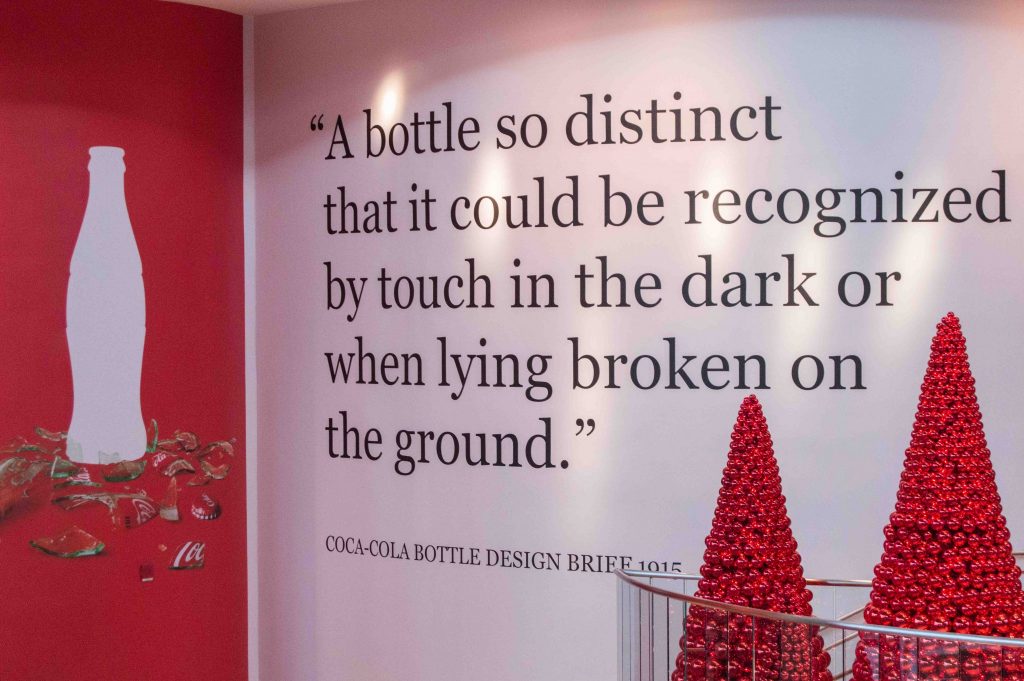 And the iconic bottle? In the original bottle design brief in 1915 the goal was set to create “a bottle so distinct that it could be recognized by a touch in the dark or when lying broken on the ground.” One thing I can tell you for sure, this company had one hell of a marketing team even back in the beginning of XX century! 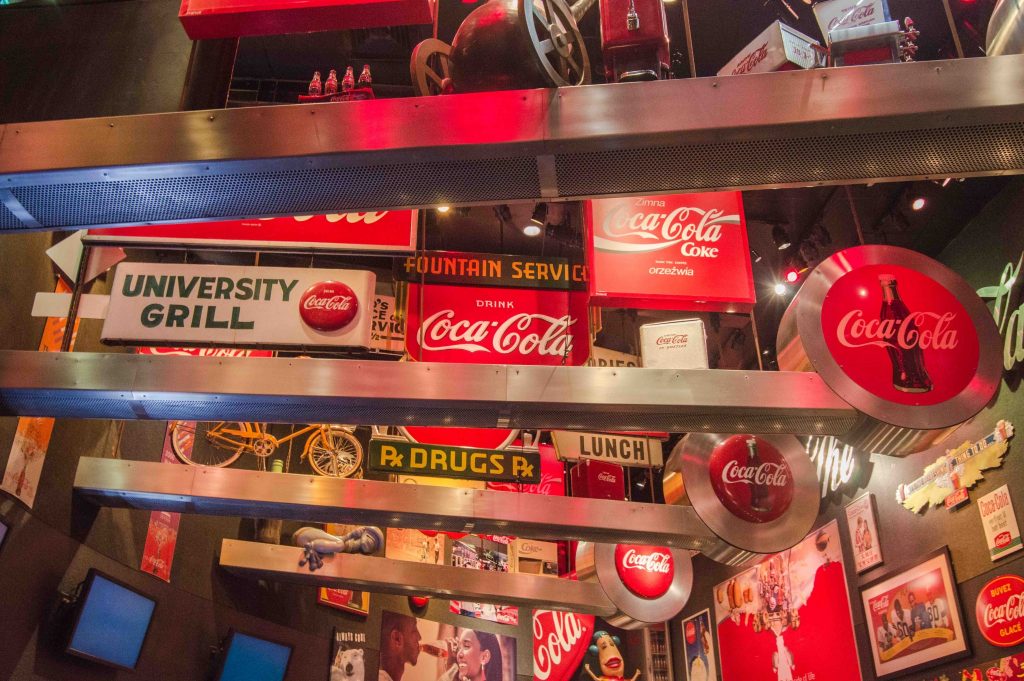 The first stop is the loft with memorabilia from countries around the world.

The World of Coca-Cola in Atlanta, GA

Once you step inside, a bottle of Coca-Cola magically finds its way into your hands. Even though I am not a fan of soft drinks, I was not about to let my $17 go to waste. So I drank everything I could find to get some return on investments.

The first stop is the loft where the World of Coca-Cola ambassador tells you the story of the iconic drink, its origins and its immense meaning for the whole world. While half-listening to the ambassador and sipping on Coke, you can see many international artifacts that represent the brand like Coca-Cola syrup urn, dated 1896 or most well-known historic advertisements. 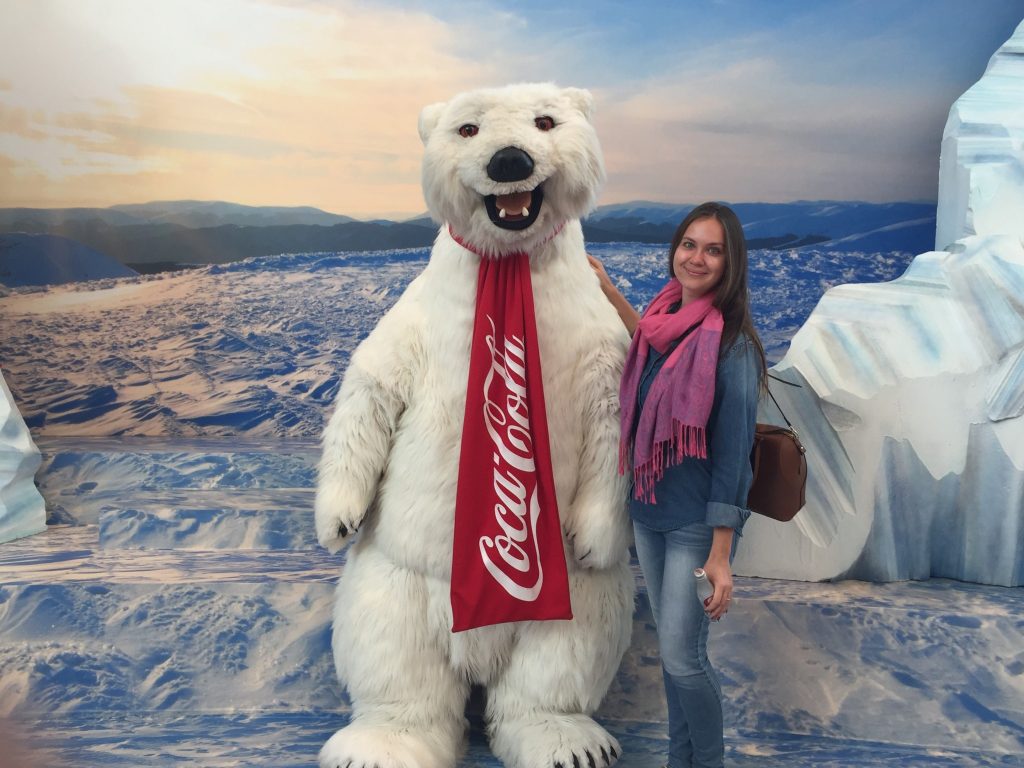 Polar Bear, the Symbol of Coca-Cola

Next you meet an awesome life-size polar bear. Don’t be embarrassed if you are the only adult in the line to take a picture with him. The polar bear made his first appearance in Coca-Cola advertisement in France in 1922, but the modern polar bear only debuted in the 1993 “Always Coca-Cola” campaign. Since then he has appeared in numerous TV commercials and print ads becoming one of the most popular brand symbols. 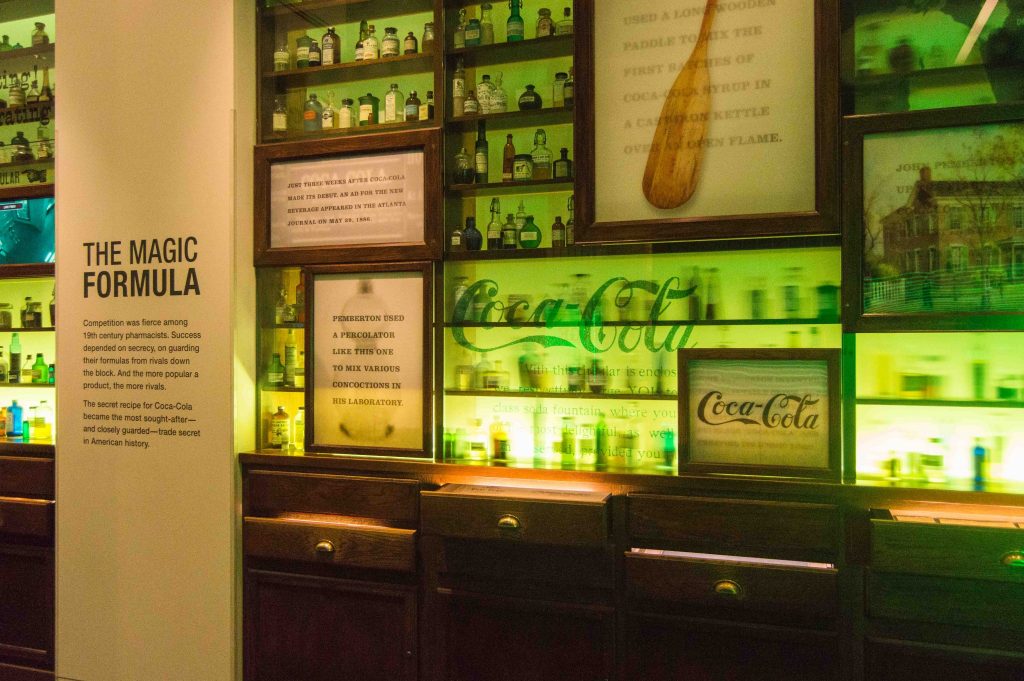 The Secret Formula Hidden in the Vault

You have, probably, heard that the recipe for Coca-Cola has been a secret since it was invented. In the World of Coca-Cola you can visit the vault where the legendary secret formula is secured. On the way to the vault you learn about the origins of the recipe, the many copy-cats seeking the fame of Coke and the legends surrounding the brand. 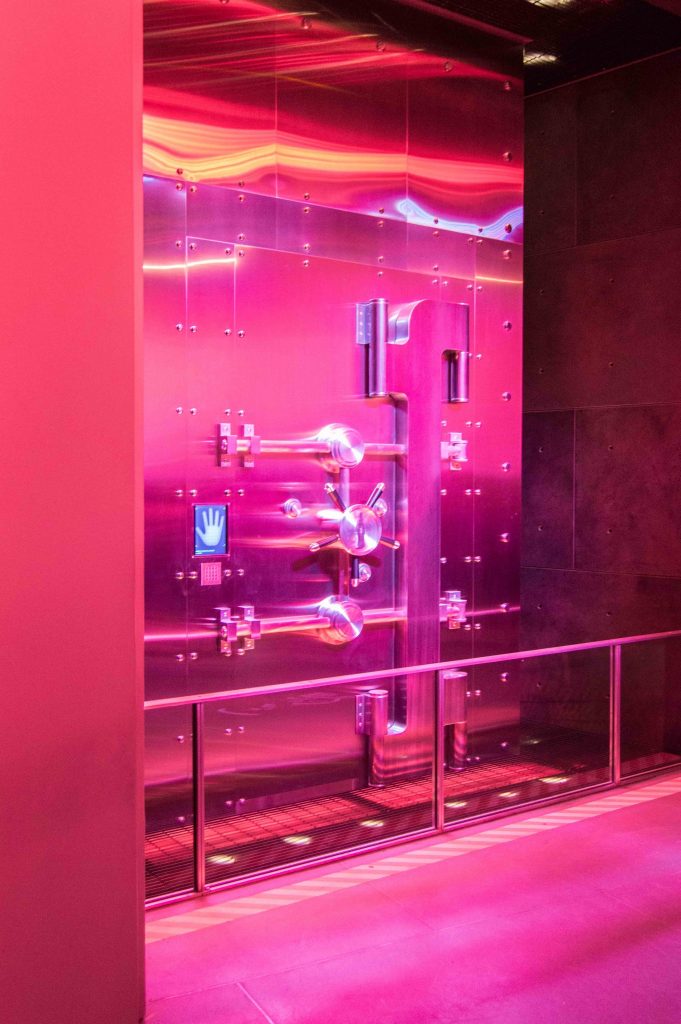 The vault itself is a real thing, not a metaphor, looking very much like the one from Ocean’s Eleven. I asked the ambassador if the secret formula is indeed inside of it and she confirmed. But I still have my doubts. 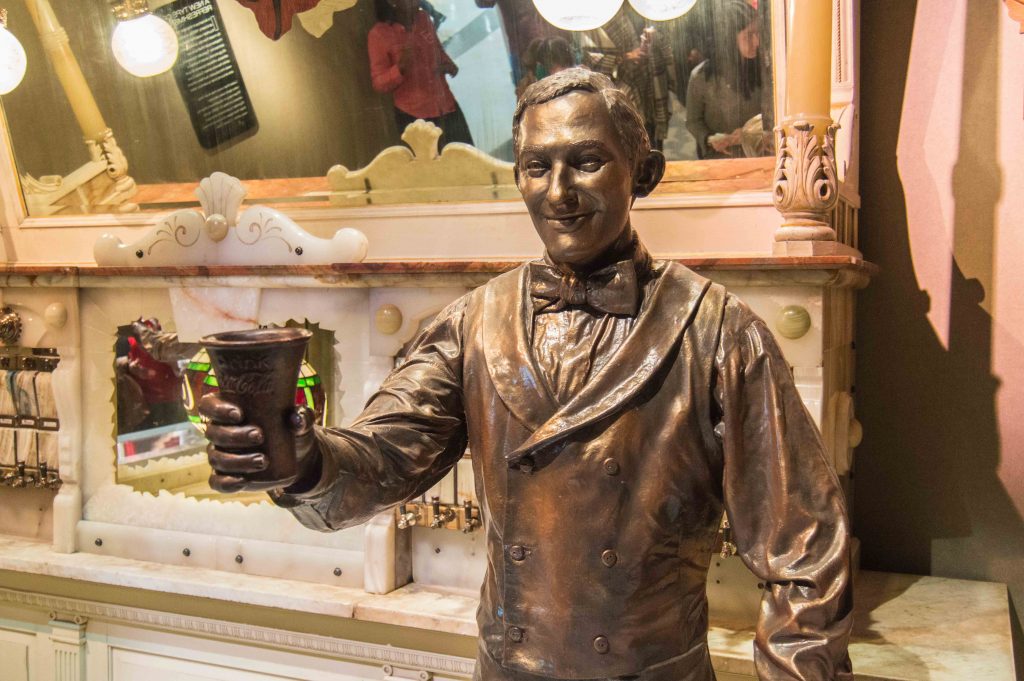 History of the Brand

Several exhibition halls are dedicated to Coca-Cola history that started right here in Atlanta, GA, but took unexpected turns and twists to eventually consume the whole world. Among other things you can find old Coca-Cola vending machines… 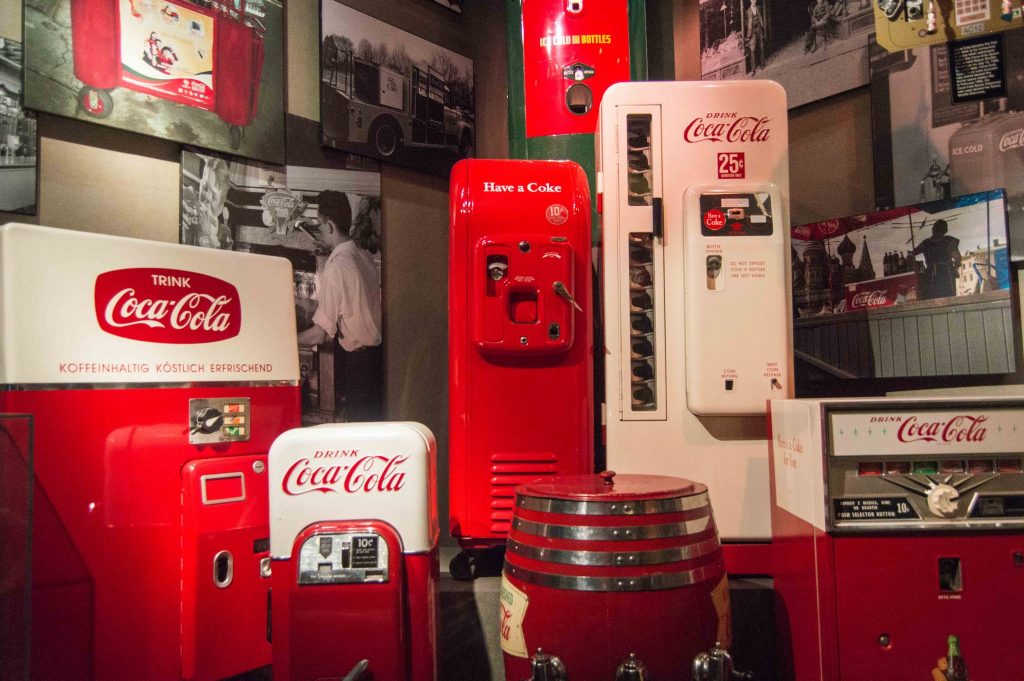 … and a 1939 Chevrolet delivery truck that came from a bottler in Buenos Aires, Argentina. 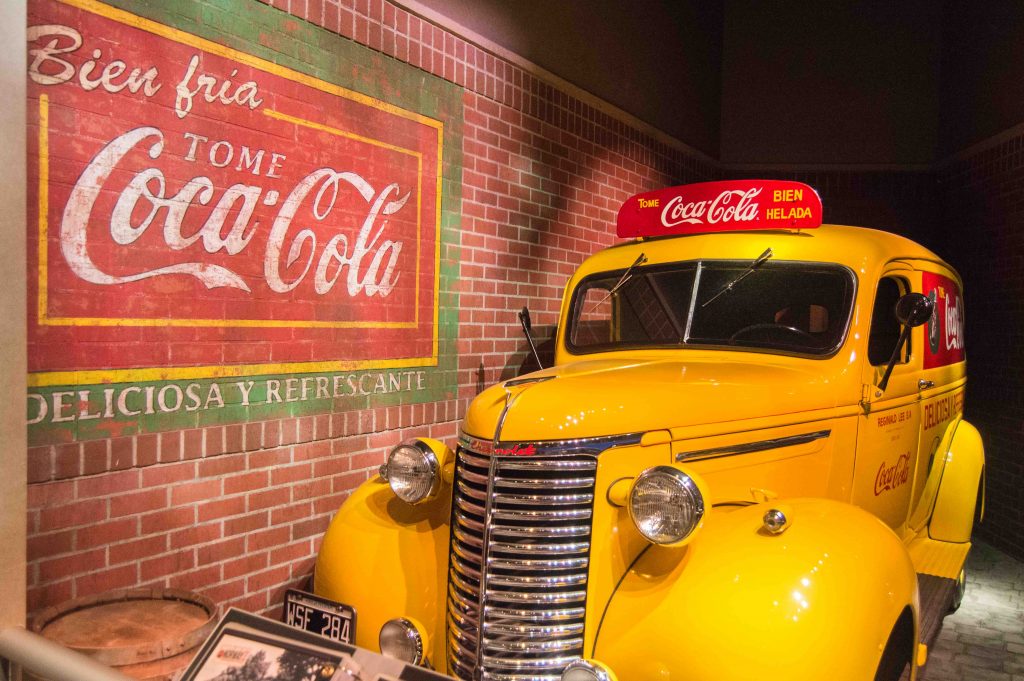 “Due to its [Chevrolet] large size, the attraction had to be built around the truck in order to fit it. So technically, the truck was actually the very first artifact installed in the new World of Coca‑Cola.” 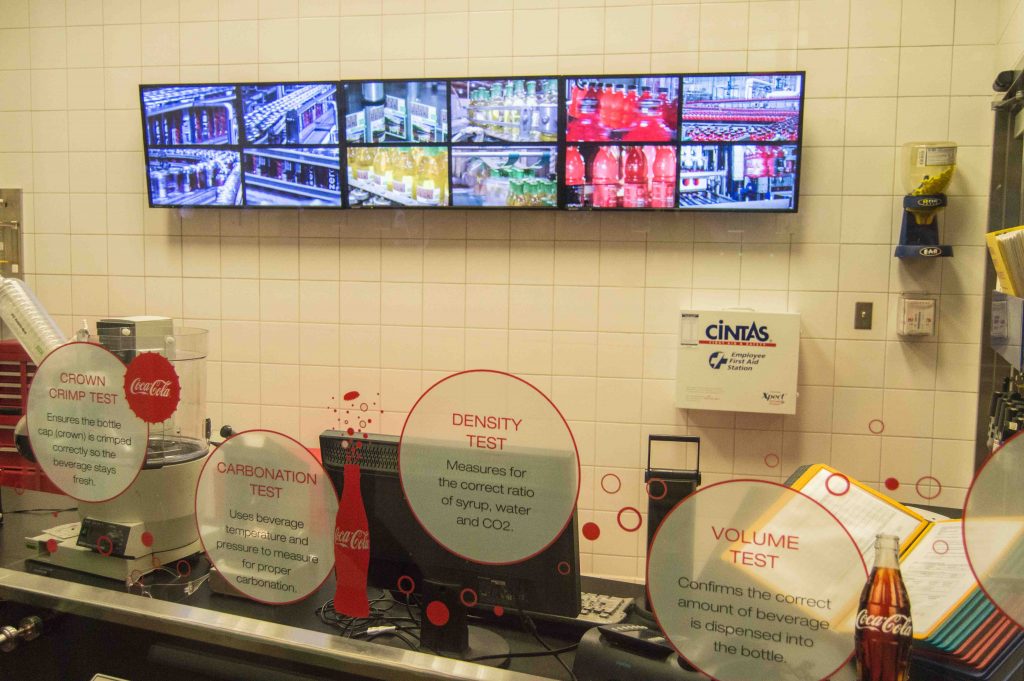 The hall “Bottle Works” provides a behind-the-scenes look into Coca-Cola bottling process. The exhibition showcases some of the same equipment and processes that are used in a full size bottling plant. Although, the bottling line here runs much slower than those at an average plant to make it easier to see the process. 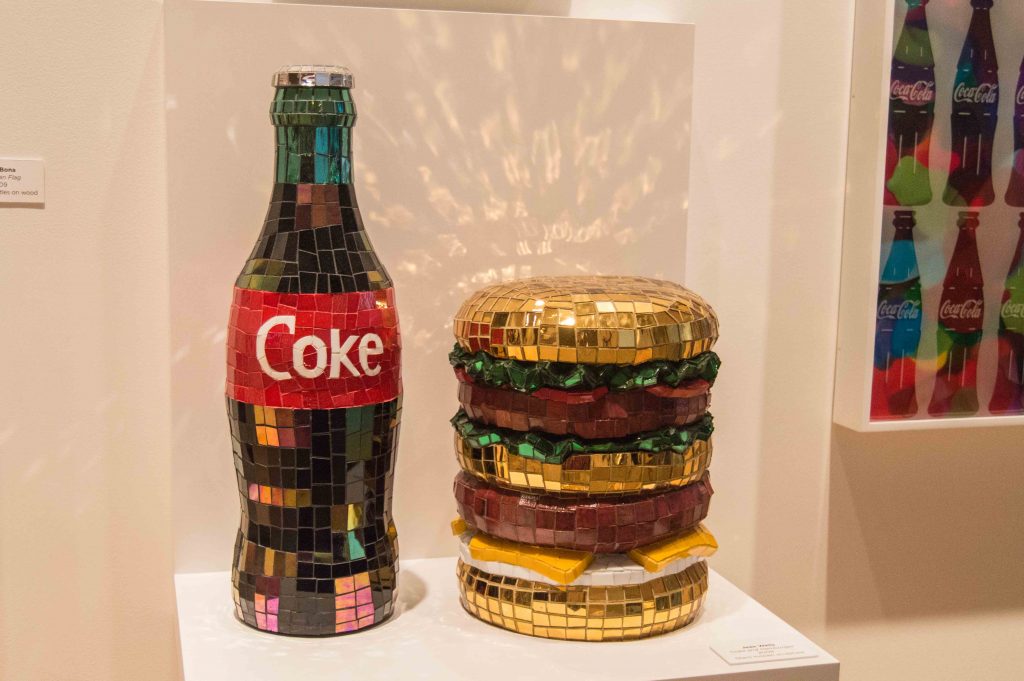 Pop culture gallery presents works of art inspired by the famous brand. The latest installation features works of Andy Warhol, James Rosenquist and Haddon Sundblom. The latter is the artist behind the Coca-Cola Santa.

“Prior to 1931, there was no consistent depiction of Santa Claus. That all changed in 1931 when Coca-Cola commissioned Michigan-born illustrator Haddon Sundblom to develop advertising images of Santa Claus. Inspired by Clement C. Moore’s Famous poem “’Twas the Night Before Christmas,” Sundblom created the popular image of the warm, friendly and human Santa that we all know today.” 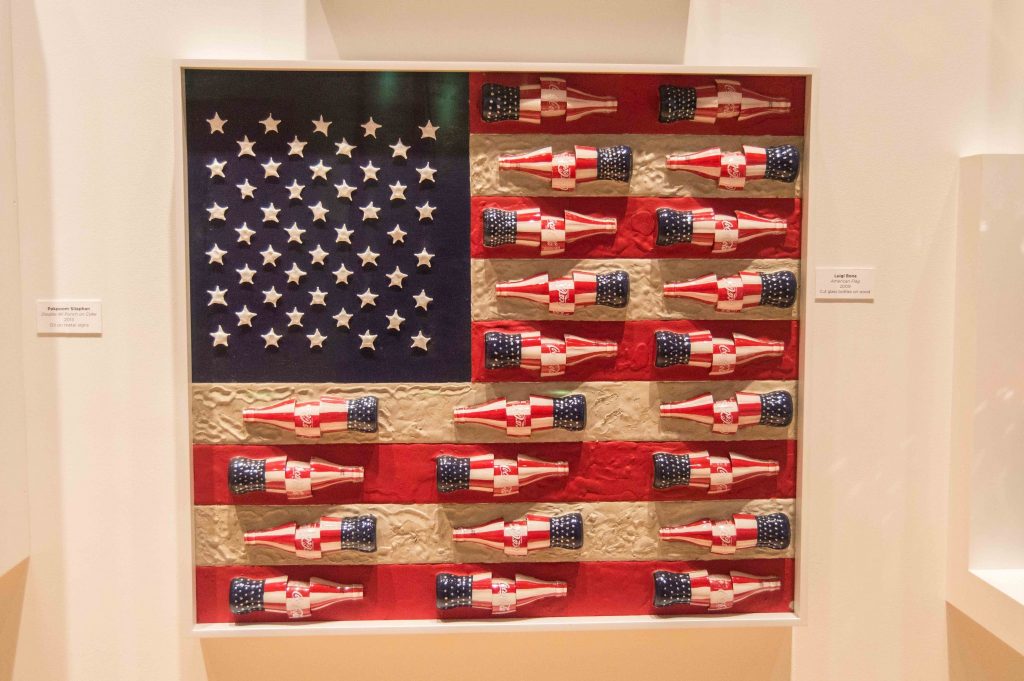 You can even sit on the sofa from the American Idol Season 4 set, which is the actual sofa that the show used to interview contestants on. At the time of my visit I had no idea the sofa has such great significance, so I took a picture in an armchair next to it. Here I am sitting in the armchair, staring dreamily at the sofa I am yet to learn is so popular. 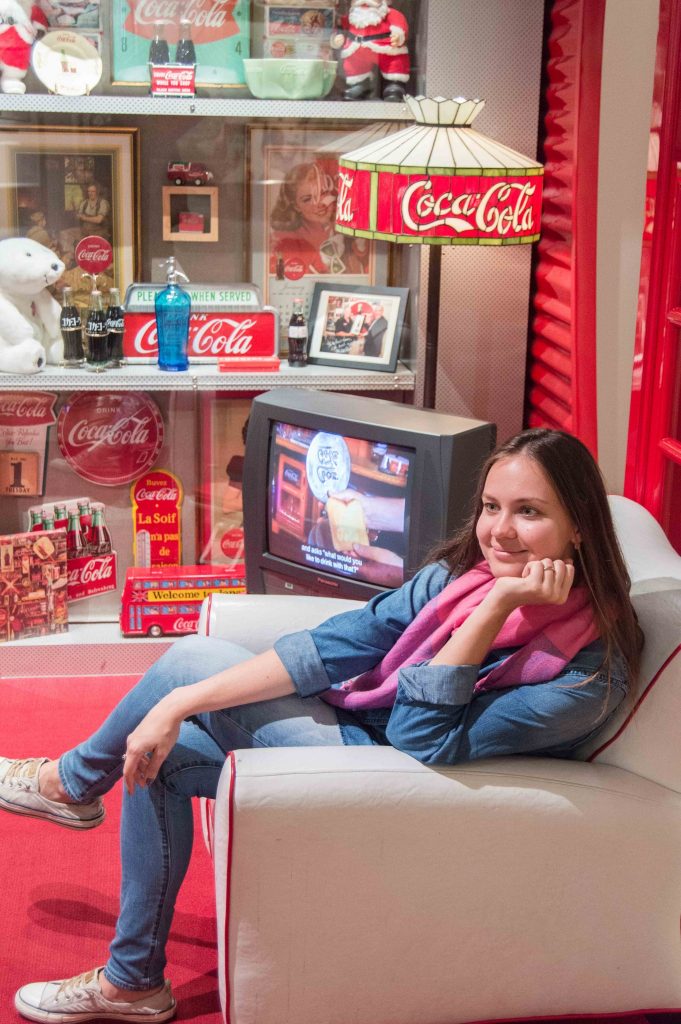 In the same room you can create your own Coca-Cola bottle design using one of the three touchscreens. 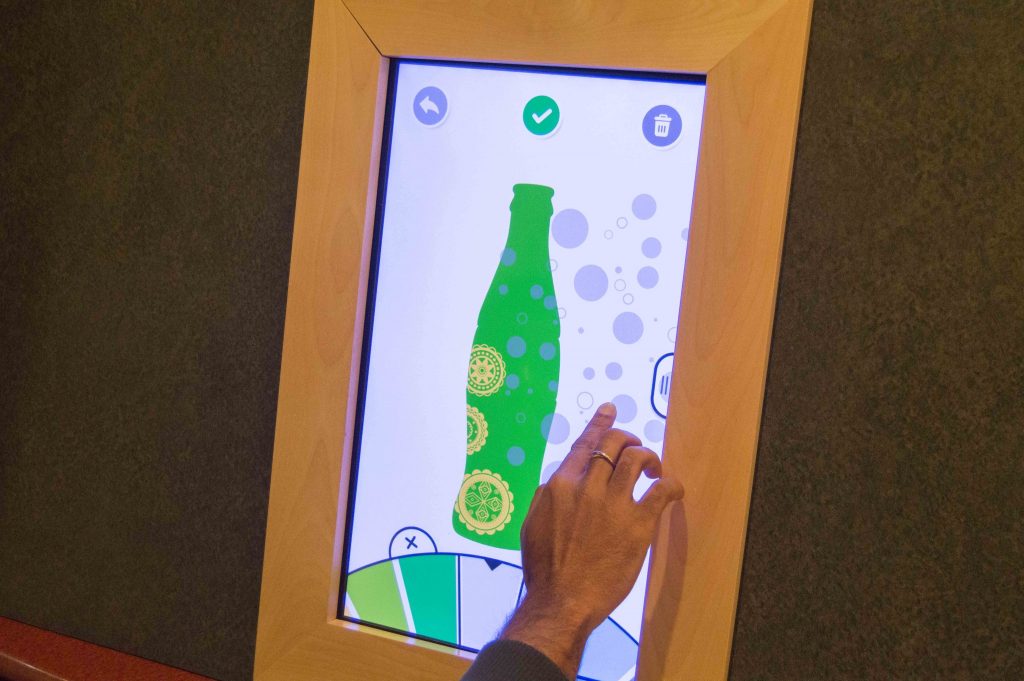 By dragging and dropping different graphic elements to the iconic Coca-Cola bottle you are making your own version. 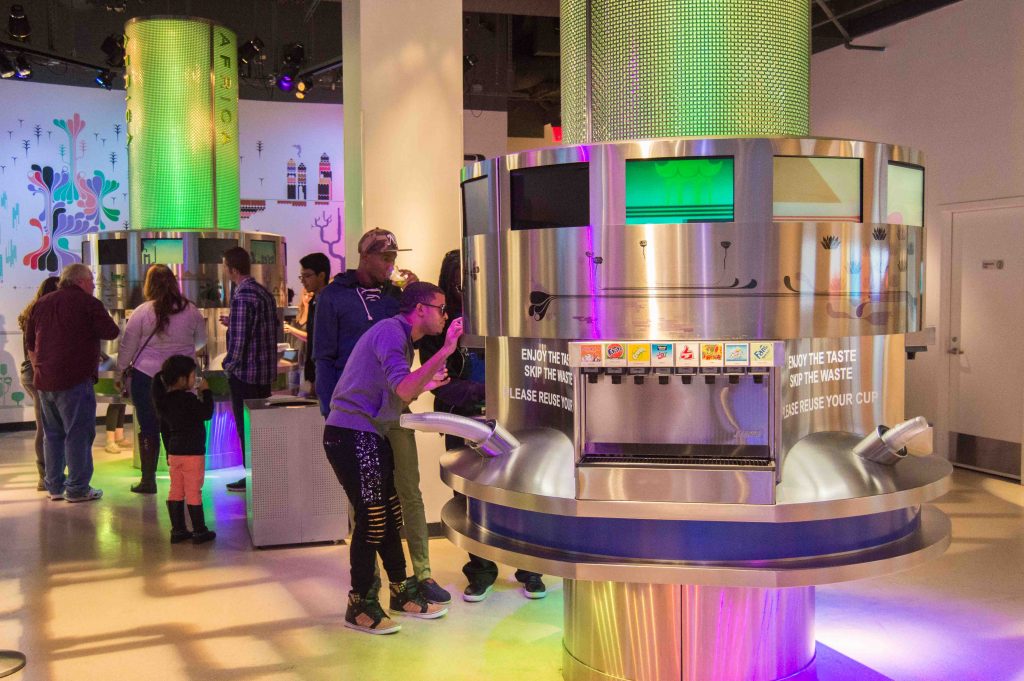 The most fascinating and fun place in the whole museum is the tasting room of all Coca-Cola products from around the world. While classic Coke is the most popular brand, Coca-Cola Company offers a great variety of other beverages across the globe. There are five stations in the tasting room  arranged geographically – Africa, Asia, Europe, Latin America, and North America. Each station offers different beverages unique to that region. 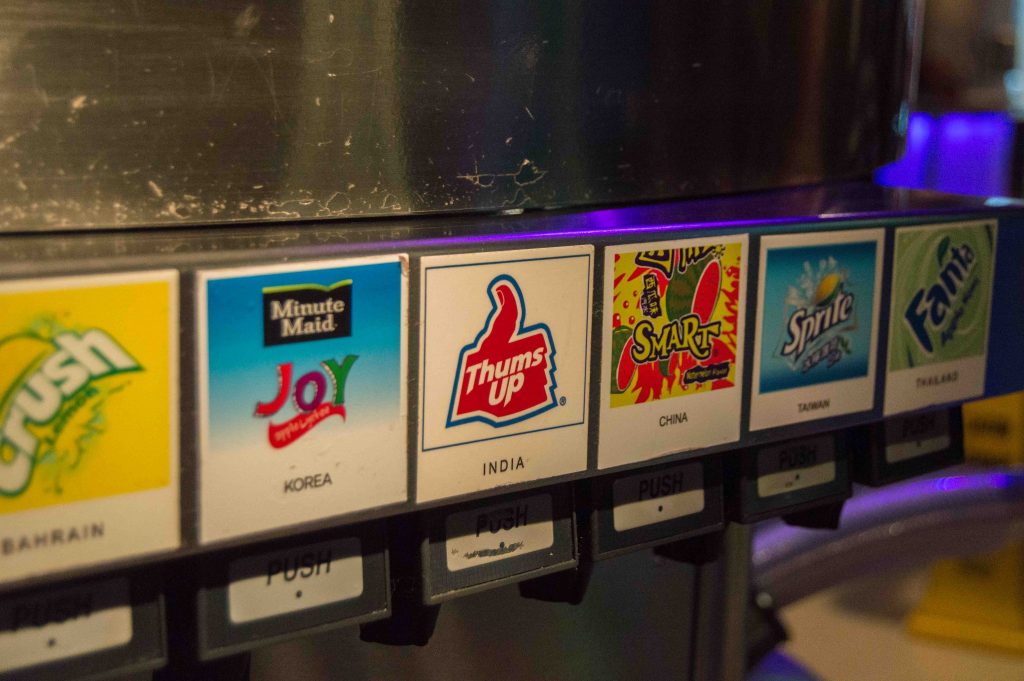 Some of the most popular drinks include Thums Up! – the best-selling soft drink in India, Fanta Pineapple from Greece, Inca Kola created in 1935 in Peru and Fanta Melon Frosty beloved in Thailand. 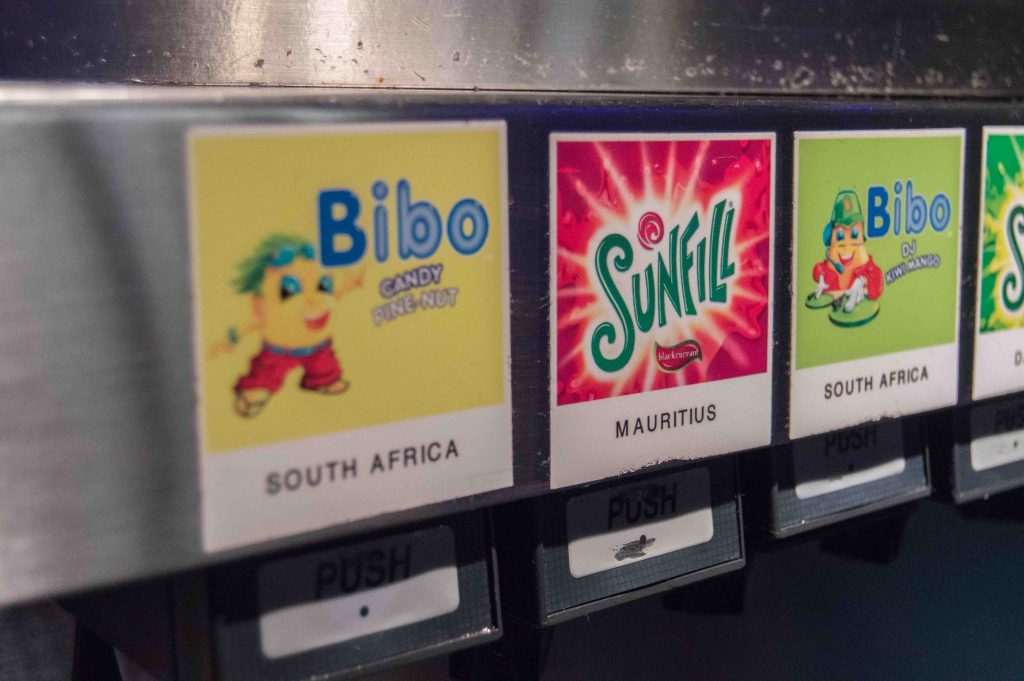 People completely lose control in this room, running from one station to another, having shots of soft drinks and inducing themselves with sugar, which, in turn, makes them crave it even more and pour cola even faster. I am no exception. After about 20 minutes of this marathon I, no wonder, felt very agitated first, then sat on a bench staring into a wall a bit later.

Watch my full experience in the video!

So there you have it. My free advertisement of a brand I don’t even use in everyday life. If the World of Coca-Cola was fun for me, it will be heaven for those of you who love this brand. I did feel like I was exposed to enormous amounts of advertisement at times, but I knew where I was going. More than by anything else, I was fascinated by the efforts of Coca-Cola marketing team that, in a span of a century, made this drink a real icon. I guess it’s my public relations degree talking. 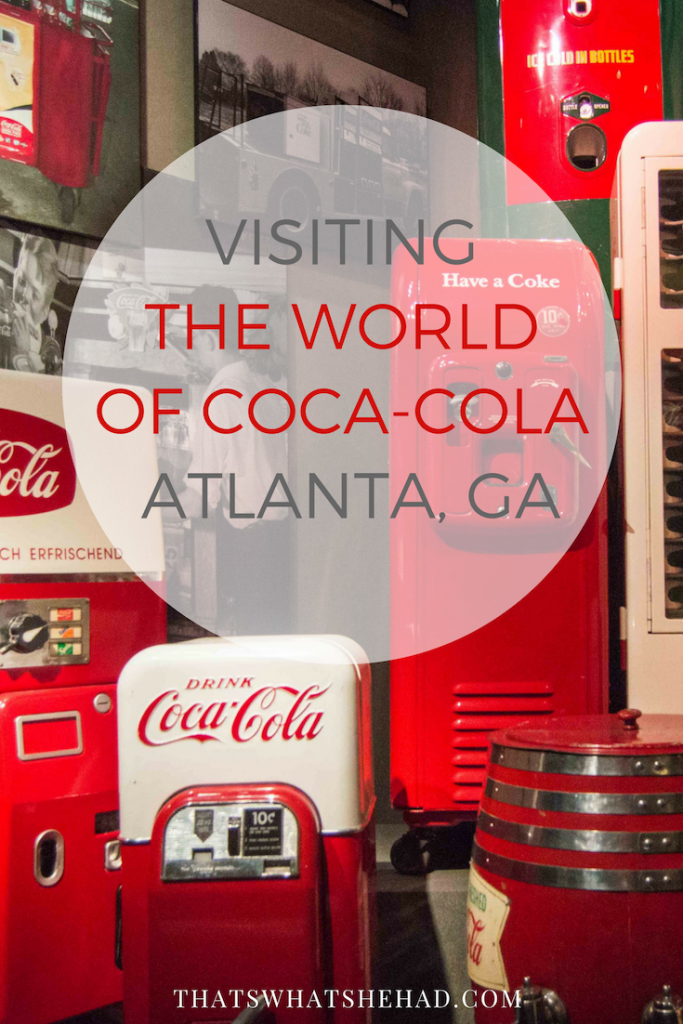 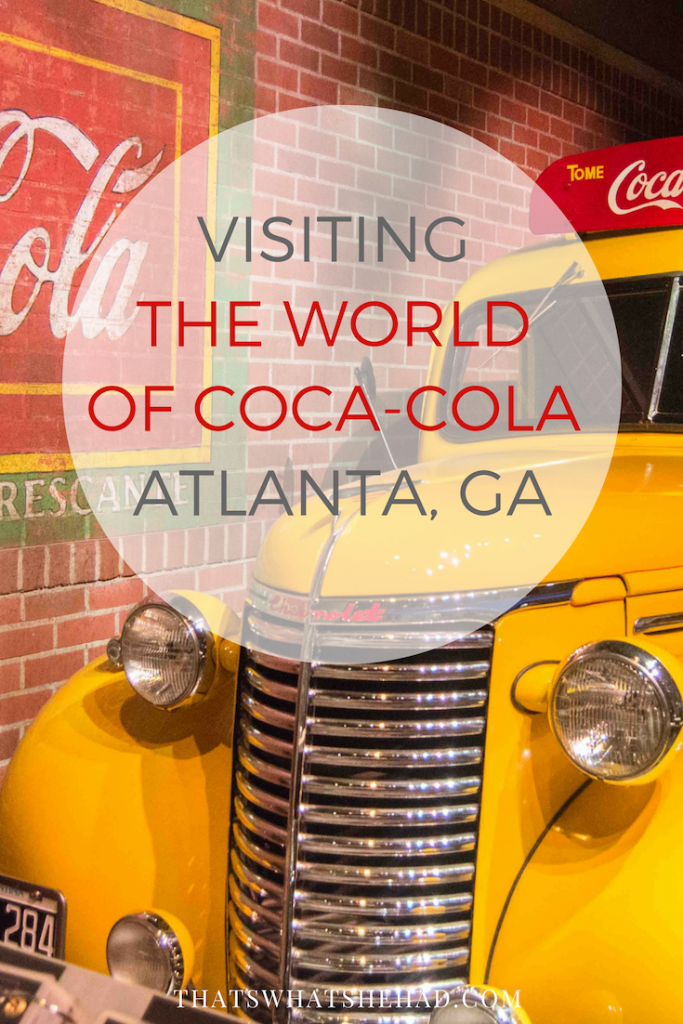