Bread and Break-in in San Francisco

It doesn’t look good when a person who is about to go through airport security check starts laughing hysterically for no apparent reason. Even worse, if the person in question doesn’t have any luggage. I mean, who comes to the airport with one brown paper bag as a carry-on item? Only a very suspicious person about to do something horrible, that’s who. Or… or… a person, whose car got broken into and all the luggage got stolen from, hours before the trip. Yea, I am the latter, I am the second type.

Inside my sad little brown paper bag was a loaf of bread. Not just any loaf of bread, mind you, but a loaf of the legendary country bread from Tartine Bakery in San Francisco. How I dreamed of trying a slice of this divine loaf, praised by everyone from Martha Stewart to the New York Times, of cutting through the burnished crust and into the soft moist interior perforated with holes big and small. 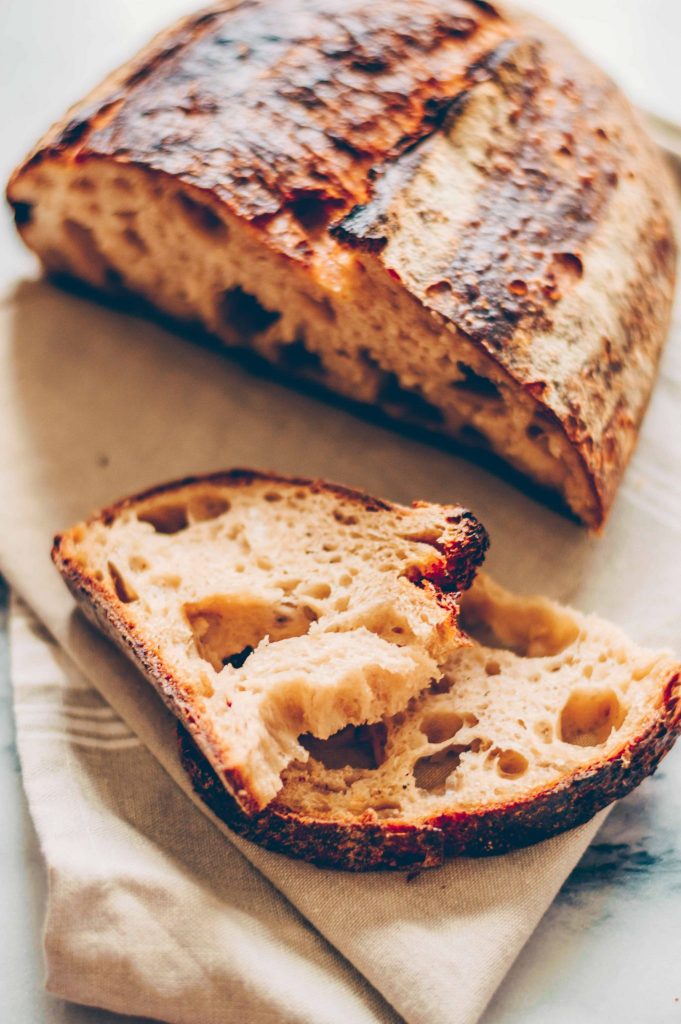 San Francisco was the last destination on my eleven days west coast trip. Destination is too big of a word. I only had four hours in the city, so Golden Gate Bridge, Pier 39, and Ghirardelli Square would not be blessed by my presence. The only stop on my itinerary was Tartine Bakery.

On the way from Yosemite National Park to San Francisco, while my husband was driving, I was busy doing something way more important – reading Serious Eats article about the staples one must try at Tartine. Croissant, of course, that was described as tasting “like butter, only better”. And then pain au chocolat, because it has “almost a full ounce of 66% cocoa Valhrona chocolate”. And the morning bun, and the quiche, and of course the bread, all the bread. I imagined buying a loaf and taking it home to Austin. I would not, under any circumstances, touch it until after the flight, when I wake up the next morning in my home, slice the bread, smother butter and jam on top, and have it with a cup of coffee for breakfast.

Tartine was on my must-try list long before I planned this visit to San Francisco. So it only made sense that after hours of driving from Yosemite, we went straight to Tartine Bakery. We stayed in line of hungry locals, ordered a sandwich and a croque monsieur, then a croissant and a pain au chocolat, and then a loaf of country bread that turned out to be $10.95. Must be made of gold, no less, this loaf of bread. But I would forgive Tartine anything, even paying almost eleven dollars for a loaf of bread, because realized dreams are worth more than eleven dollars. 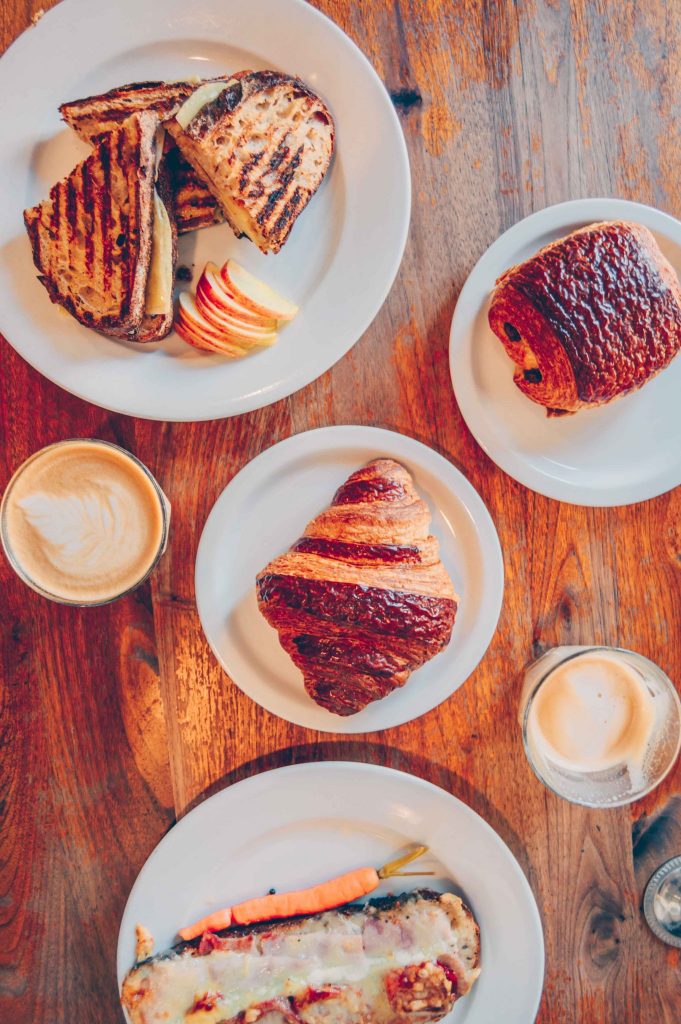 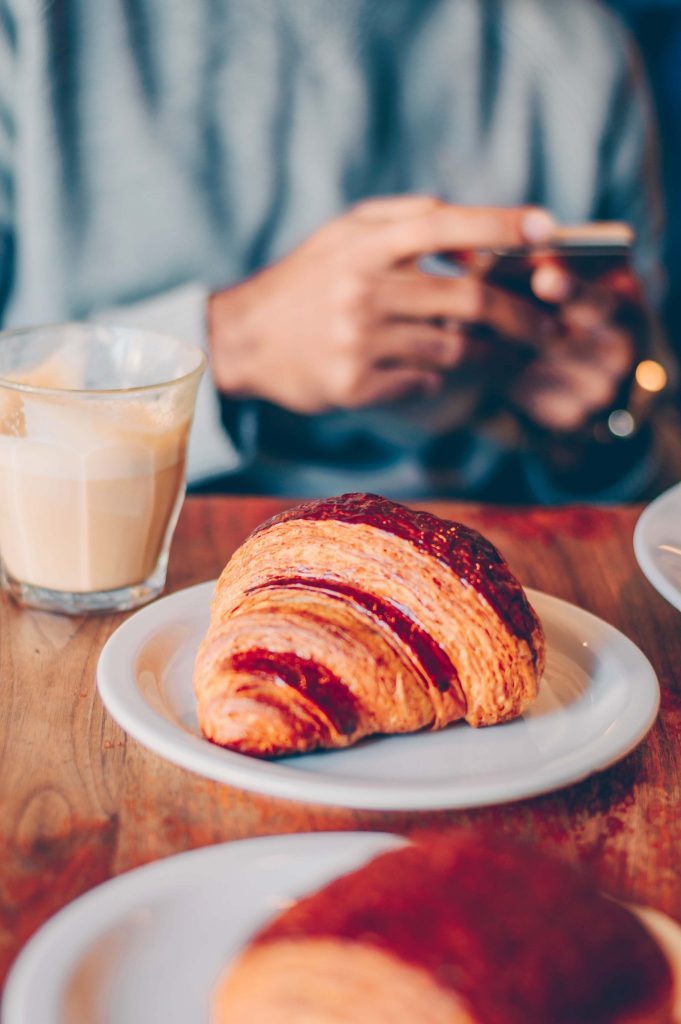 We put the brown paper bag with my precious loaf to the back seat of the rental car and went to grab a coffee before leaving for airport. One hour later we were standing in front of a broken rear window looking inside of the trunk where our luggage once was, and now the grayish lining was covered with shattered glass.

Nothing has ever been stolen from me. A cheap old phone once. But nothing as big as two carry-on luggages and two back packs full of clothes, shoes, jewelry, a laptop, and a drone. The feeling of injustice is overwhelming, especially when you need to drive to the airport in ten minutes.

Surprisingly, I didn’t curse. I only exhaled a loud “Oh!” And then again “Ooooh!” It’s funny how when you think back a lot of events come into place. For example, on the morning of that day, for the first time, I put on a newly bought key-pendant from Tiffany that I was carrying around in the backpack the whole time. Or how earlier on the trip I was frustrated because I had forgotten my external hard drive with all the pictures. Have I not forgotten it at home, all my photos taken this year would be gone.

it’s also interesting what you think of first when it comes to stolen items. “I had my laptop in there, with all the work, the articles, the photos… Oh, my beautiful amber necklace brought from Russia! Oh and the scarf, my gorgeous Russian scarf… the perfume… damn it, I just bought it, I loved it so much, that sweet aroma of caramel… the bread! Did they take the bread too?” I looked at the back seat and saw my brown paper bag exactly where I left it. They didn’t take the Tartine country bread? The legendary loaf that takes dozens of hours to make and costs eleven dollars? Idiots.

Do I need to describe the calling the police department, the insurance company, and the car rental company? The sad realization that most likely nothing will ever be found? The driving on highway with chilly winds blowing through the non-existing rear window? I’ll just take you straight back to the security line at the airport.

I was standing there thinking about the previous time I was at the airport on this trip. I was about to fly from Seattle to San Diego when I lit up like a Christmas tree on the scanner. I went through a pat down and got tested for explosives. When the test came out positive, I had to go through another pat down in a private room and a bag search. Did I mention that I was feeling sick after getting food poisoning and throwing up right before driving to the airport? Yes, a lot of things happened on this trip. 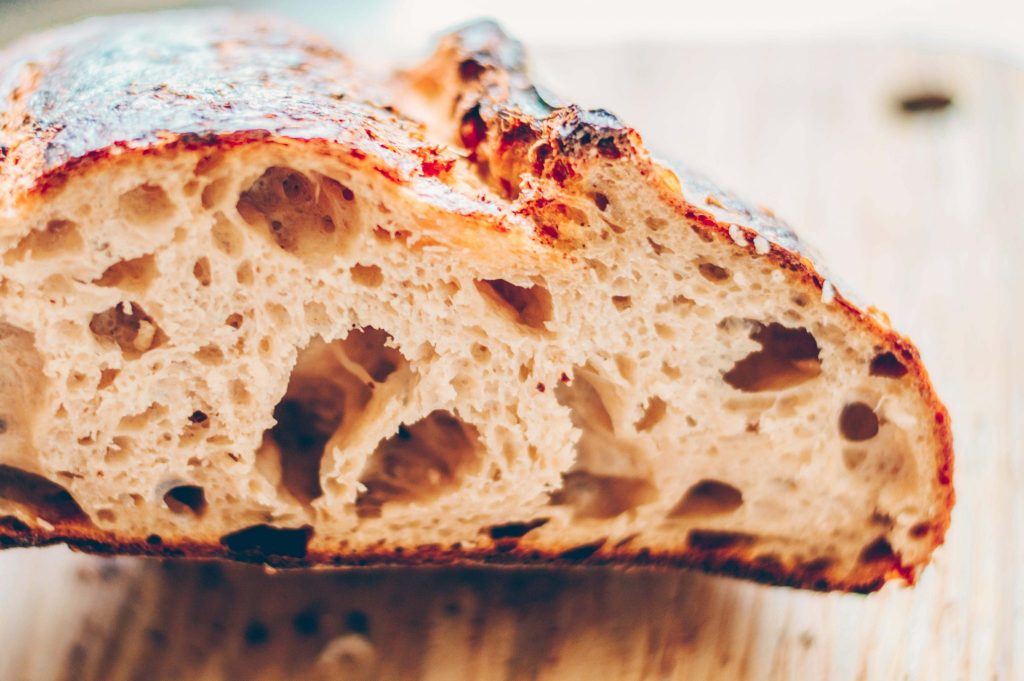 Now I was contemplating how easy it would be to search my brown paper bag, in case security officers thought I was a threat to the human kind again. I was looking at other people in line dragging their suitcases, carrying backpacks, holding on to purses, and then I looked down at my brown paper bag. Apart from Tartine bread it also featured leftovers of two sandwiches and two reusable coffee cups. All the traveler’s essentials. After the shock and frustration of the past hour, the irony of this story hit me in the most inappropriate moment. I was holding on to the one thing I so desperately wanted to bring from this trip – a loaf of bread. I laughed till I cried.

Instead of waking up in the comfort of my own house after the flight I woke up on a mattress at my friends’ place – the house keys were gone with the backpack. Instead of eating a slice of bread with butter and jam in the morning, I went out and had breakfast tacos. 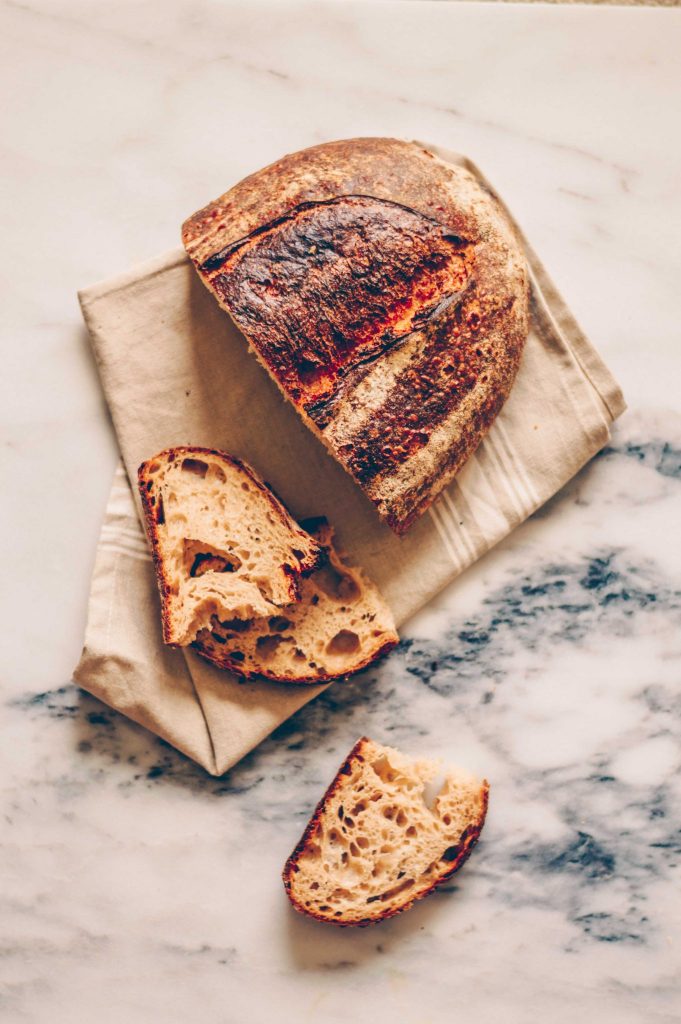 My first bite of Tartine bread happened around lunch time, when I found another set of keys and finally made it home. With no food in the fridge after eleven days on the road, I cut off a slice of bread and took a bite. My husband claims I said “mmmm” half a second before I actually bit it. In my defense, I knew it would be good, so what difference does it make whether I say “mmmm” before or after.

Maya Angelou once said: “At the end of the day people won’t remember what you said or did, they will remember how you made them feel.” I think, the same principle applies to food. At the end of the day, you won’t remember what that pastry or a bowl of soup tasted like, but you will remember how it made you feel. Tartine bread made me laugh when I should have been crying. The taste, although exceptional, was secondary.