Monday Mornings Are for Coffee with Pol Sambol Toastie

Mondays were for grocery shopping. Tuesdays, Wednesdays, and Fridays — for baking cakes and making jam, Thursdays and Saturdays for selling the said cakes and jam at the farmers’ market, Sundays… did Sundays even happen? My only day off a week flew by, and I could never remember what it was I did and where the day disappeared.

Then came Monday again. Mondays were not hectic. You’d expect them to be, since grocery shopping wasn’t done at the convenience of an air-conditioned supermarket, but rather in the heat and noise of busy Pettah market streets of Colombo. In reality, Mondays were structured. I had a routine.

Monday mornings were somewhat of an aftertaste of Sundays. At 7.30 am sharp I’d jump onto the backseat of the car driven by my father-in-law and spend an hour en route to the World Trade Center, located just outside of Pettah, half-asleep. At WTC, my sister-in-law and I would get down: her — to go to office, me — to have breakfast at one of the coffee shops inside the twin towers. 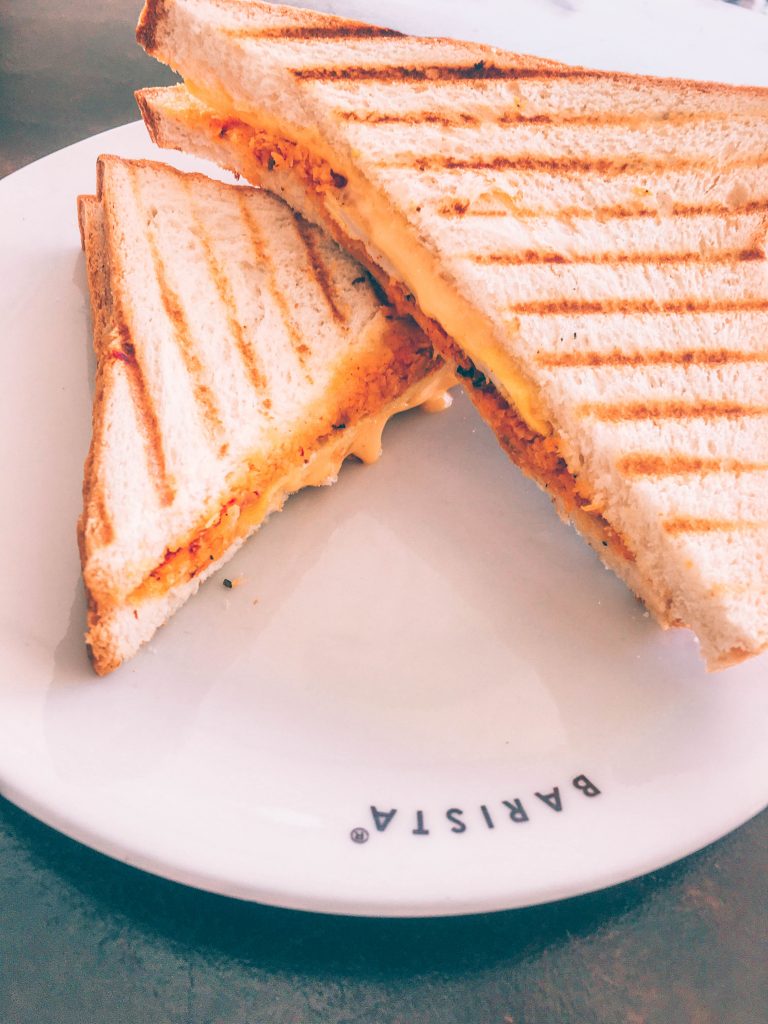 That Monday breakfast was my everything. I knew that a hard work week was about to start, but not just yet, not until I got a cup of coffee and a pol sambol toastie from Barista. Seven years ago Barista was fancy. It was for me, anyways.

Born in India in 2000, the chain of espresso bars quickly became popular in South Asia and opened its first coffee shop in Sri Lanka in 2002. In 2007 Barista was acquired by Lavazza, and although the company later sold the chain, the espresso bars still serve Lavazza coffee.

I couldn’t afford Lavazza coffee on a daily basis, but Mondays were special and not to be messed around with. Besides, their breakfast deal was some kind of magic. Between 7 and 10 am one could buy a cup of coffee and a sandwich for the price of less than a cup of coffee. Whether their marketing team screwed up or they were just that generous I don’t know, but it worked well for me. The deal is still on their menu seven years later, by the way. So clearly I don’t understand something or other about running a business, especially given that Barista is alive and well and my little bakery is not.

But back to breakfast. A cup of americano with warm milk on side and a pol sambol toastie cost me about 300 rupees (USD $2). And, as much as coffee was needed early on Monday morning, it was the toastie that I was anticipating the entire week. 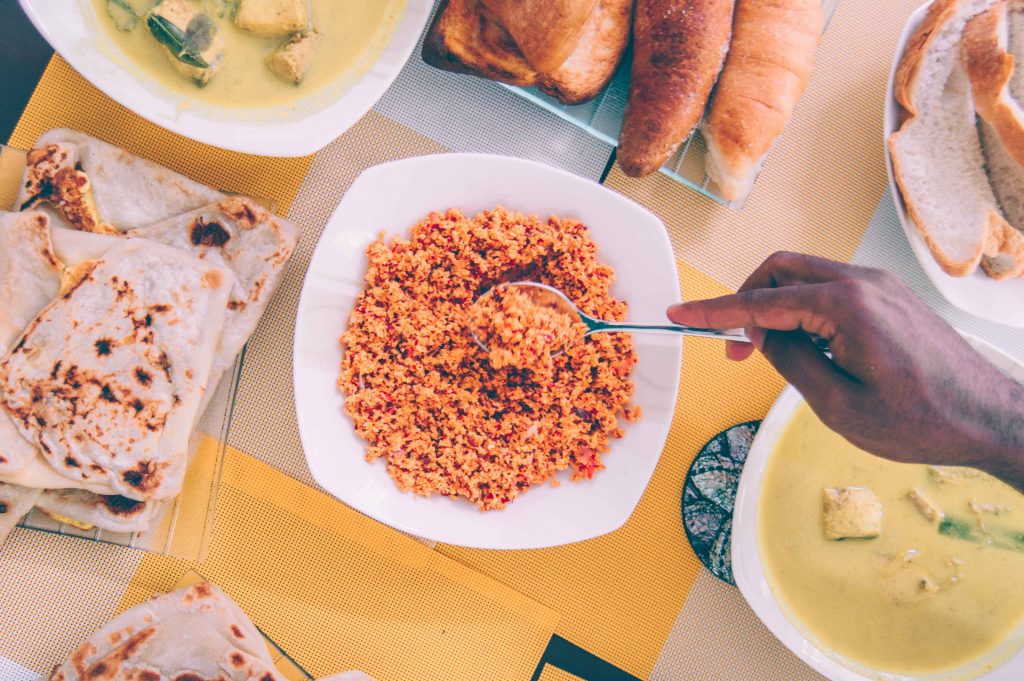 In Sinhalese, “pol” stands for “coconut”. Pol sambol is a mix of freshly grated coconut, chili flakes, onions, lime juice, and Maldive fish, served as a side dish with rice and curry, fresh bread, or hoppers (local pancakes).

Seven years ago, pol sambol toastie was making its first appearance in Sri Lanka. Not that it wasn’t a thing before — pol sambol is one of the most popular dishes on the island — let’s just say, the sandwich was not as fancy.

Sri Lankan moms would brown bread in a toaster, spread butter on top, add pol sambol, and pack it for kids to take to school. Cafes like Barista took it one step further, brought a touch of foreignness into a local snack. They added a fried egg and cheese to the butter-pol sambol combination and grilled it till the bread was crispy and cheese was oozing out. 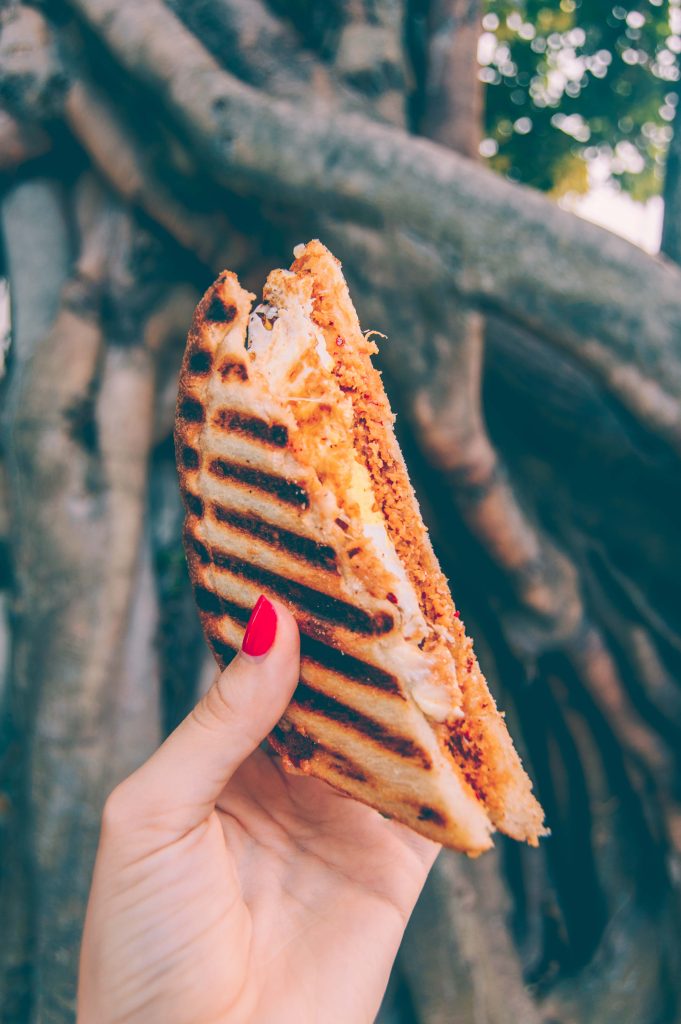 What I consider the first commercially made pol sambol toastie — panini made with roast paan (local type of bread) from Panino.

Barista’s was one of the first pol sambol toasties in Colombo. Not the very first one — I’d give that title to Panino — but definitely on the cutting edge of the spicy coconut sambol sandwiches development. Right now one can find all kinds of pol sambol toasties around Colombo: made with roast paan (crispy local bread), served as an open sandwich, topped with hollandaise and bacon. 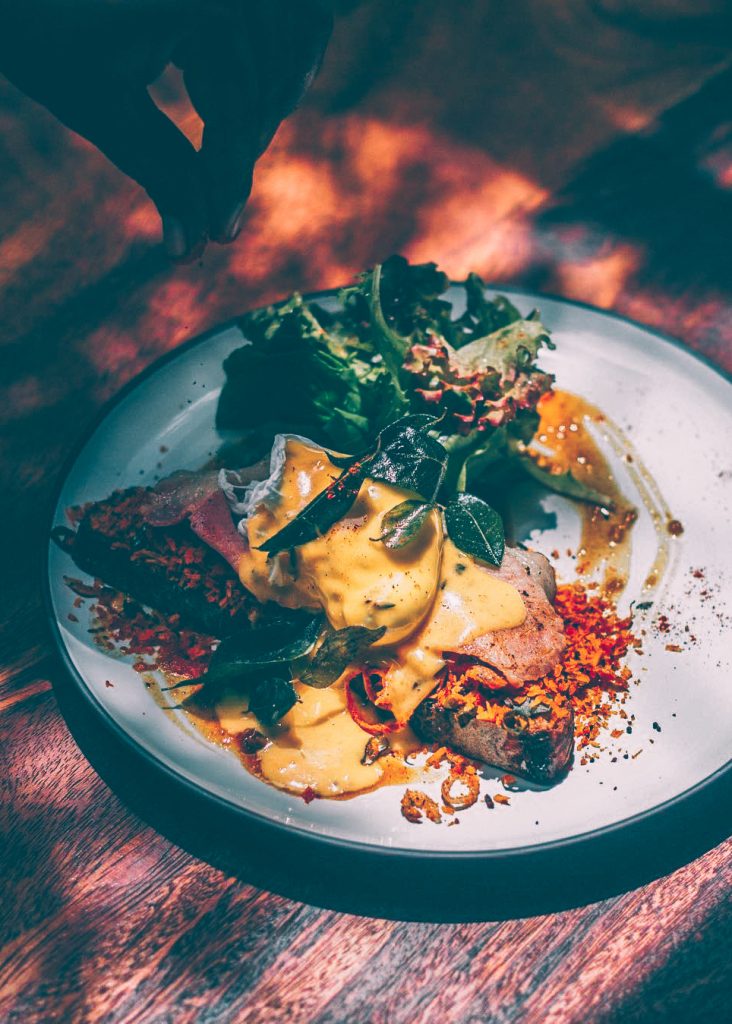 My favorite pol sambol sandwich at the moment: with bacon, egg, and hollandaise sauce served at Plus Nine Four (photo courtesy of Plus Nine Four)

Barista’s toastie never changed. Maybe that’s the problem? Or maybe it’s my too high expectations for the simple treat that is a toastie. Returning to Sri Lanka all these years later and expecting a sandwich to be everything I dreamed of and more is a tidbit too demanding. I wish I could write that the toastie was just as good as I remembered, but it doesn’t do the trick anymore. It does bring back memories, though.

On Mondays, I walked into Barista, placed my order, then pulled a fat book out of my purse. The next two hours were spent with my legs on the couch, devouring a toastie, trying to counterbalance each spicy bite with creamy coffee, and reading. I don’t remember how many Monday mornings I spent at Barista, but I do remember finishing Shantaram and Losing My Virginity there, and those take quite some time.

At ten, after finishing my Monday relaxation ritual, I’d head out to the busy streets of Pettah market, making my way between cars, tuk-tuks, and people in search of the cheapest sugar, fruits, and canning jars. The work week began, but not until I had my weekly fix of coffee with a pol sambol toastie.

P.S. I certainly don’t want to start a war about who made the first ever pol sambol toastie, this is simply a recollection of events as I remember them.