How to Make Authentic Russian Tvorog at Home

When people ask me whether living abroad makes me miss Russian food, I always reply with a firm “no”. Not because I don’t love it, but simply because I can prepare most of Russian dishes in the convenience of my own kitchen. For the same reason I almost never go to Russian restaurants abroad, except for one time in Brighton Beach. Borscht? Not a problem, gimme those beets! Blini? I make them 3 times per week for breakfast – takes me no longer than 15 minutes. Pelmeni? All I need is 10 episodes of Friends to keep me company and in three hours I got dinner ready. And then there’s Russian cottage cheese… or tvorog as we call it. 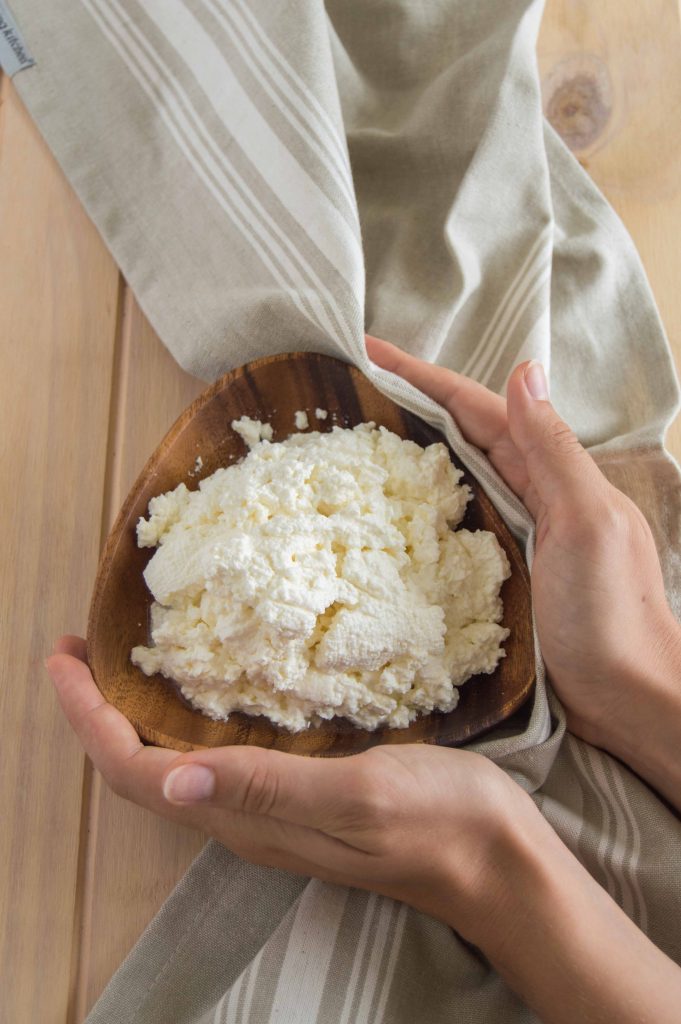 Freshly made cottage cheese (or tvorog as we call it in Russia).

For the purposes of this post I will use the terms “tvorog” and “cottage cheese” interchangeably, since both of them refer to soft lumpy cheese made from the curds of sour milk. That is in theory. In practice, cottage cheese I have tried abroad doesn’t stand comparison with Russian tvorog.

Tvorog is not something you make in Russia, you buy it from a grocery store or from a granny at the market. There are plenty of varieties for every taste: from fat-free option (not my scenario) to 9% fat cottage cheese (now, that sounds good) to a sweetened version of tvorog with raisins called tvorozhok which, if you translate it literally, means “little cottage cheese” or “baby cottage cheese”. Can we stop for a second and admire the beauty of Russian language? Baby cottage cheese must be the most romantic name for a type of food!

I never realized how much I love Russian tvorog until my travels started. Actually, the realization didn’t sink in until I returned home and couldn’t help eating cottage cheese every single morning for two weeks. And so the ritual was born. When I plan a trip to Russia my mom asks what I would like to have upon arrival, knowing full well that all I need is cottage cheese, rye bread, and pickled cabbage. Don’t worry, I don’t eat all three at the same time.

When abroad, I am left with petty imitations of cottage cheese that are not worthy of the name. If you want to understand how delicious cottage cheese is in Russia, consider this: we eat cottage cheese on its own. We don’t serve it on a toast or alongside an omelette for breakfast. Tvorog mixed with a tidbit of sour cream and sugar is a great breakfast in itself. 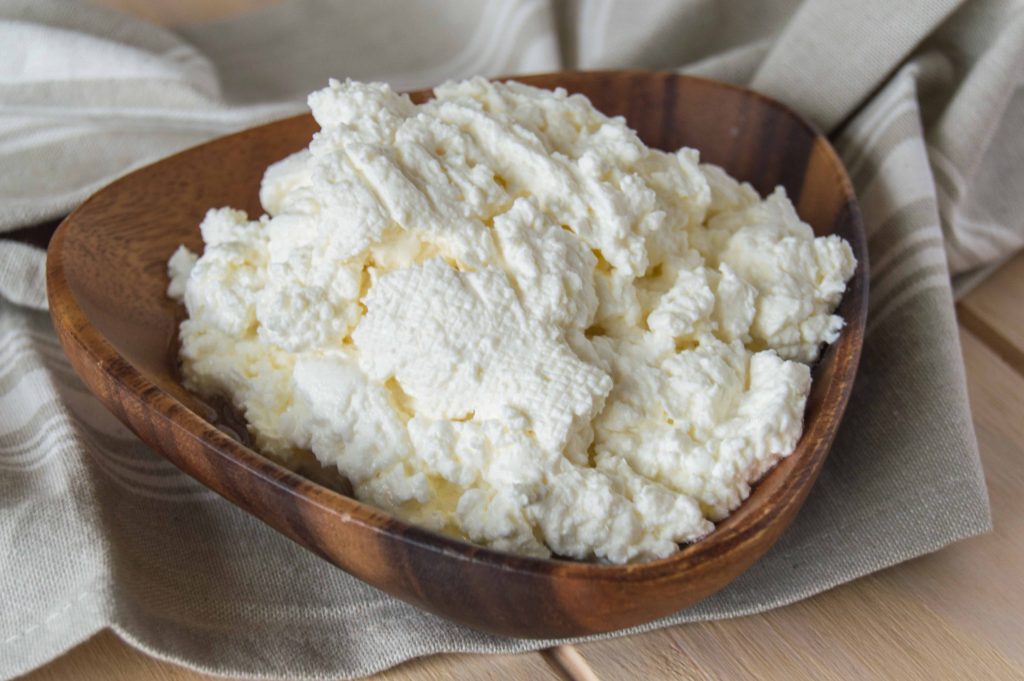 You’ll find a multitude of tvorog recipes online. In my opinion, there are three main ways of preparing tvorog at home: the right one, the realistic one, and the “Nobody’s got time for that!” one.

The Right Way of Making Tvorog

The right way requires two ingredients: milk and patience. Leave milk outside at room temperature and wait for several days. Bacteria in milk will do all the work for you turning lactose into acid and causing milk to curdle without actually spoiling. The resulting product is called clabber.

According to the Joy of Cooking,

“Clabber, much like cultured buttermilk or yogurt, is milk that has soured to the stage of a firm curd but not to a separation of the whey.”

Leave it for another day and you will see that clabber is curdling even more and whey (greenish liquid) starts separating from curd. Now all you have to do is strain it and voila! Only one little problem: for this method you need raw unpasteurized milk which is hard to find in United States where I live now.

The Realistic Way of Making Tvorog

Since getting raw unpasteurized milk is not an option, let’s be real and work with what we have – pasteurized milk. In order to help milk turn into cheese we can add acid ourselves instead of waiting for bacteria in milk to produce it naturally.

My tvorog recipe is adapted from farmer’s cheese recipe by Natasha’s Kitchen. I first made it about half a decade ago, but as it happens, I did a few tweaks of my own over the past years. I don’t use the oven, but heat the milk on the stove instead (faster!). When heating I stir the mixture carefully to ensure it heats up evenly.

The classic way is to use cheese cloth to strain tvorog, but I find that a fine strainer works well at catching even tiny bits. Bonus point: scraping tvorog off a strainer is so much easier than off the cheese cloth.

For homemade tvorog recipe you will need 2 parts milk and 1 part buttermilk, which is, essentially, soured milk. Combining the two and leaving it at room temperature will help to speed up the process. After you leave the mixture in warm place for 24 hours, it will look like this: 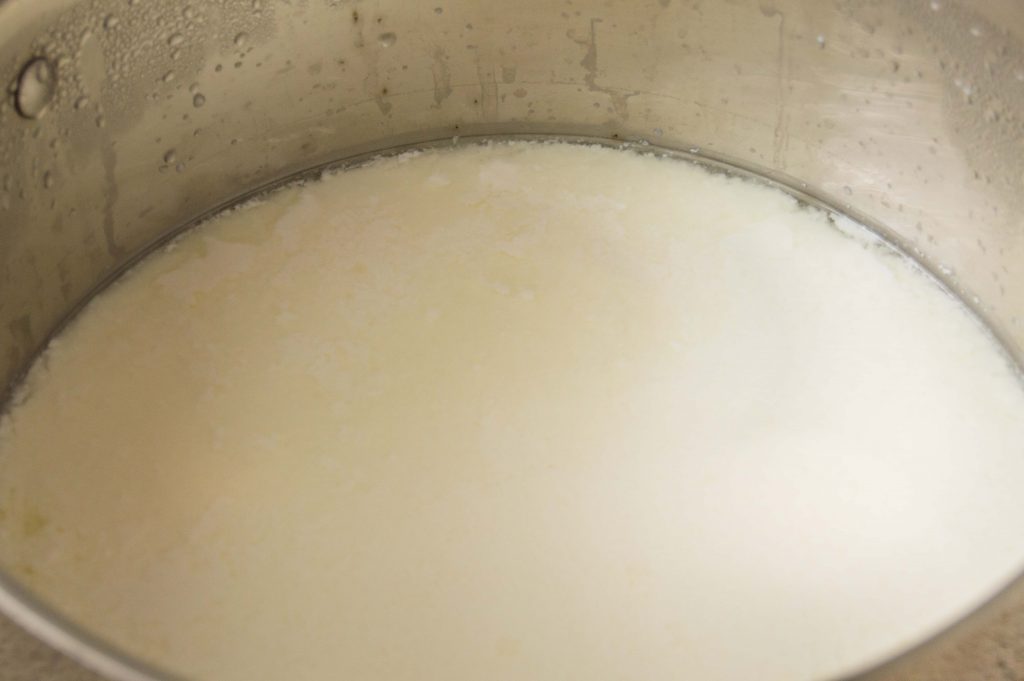 After 48 hours it will curdle even more: 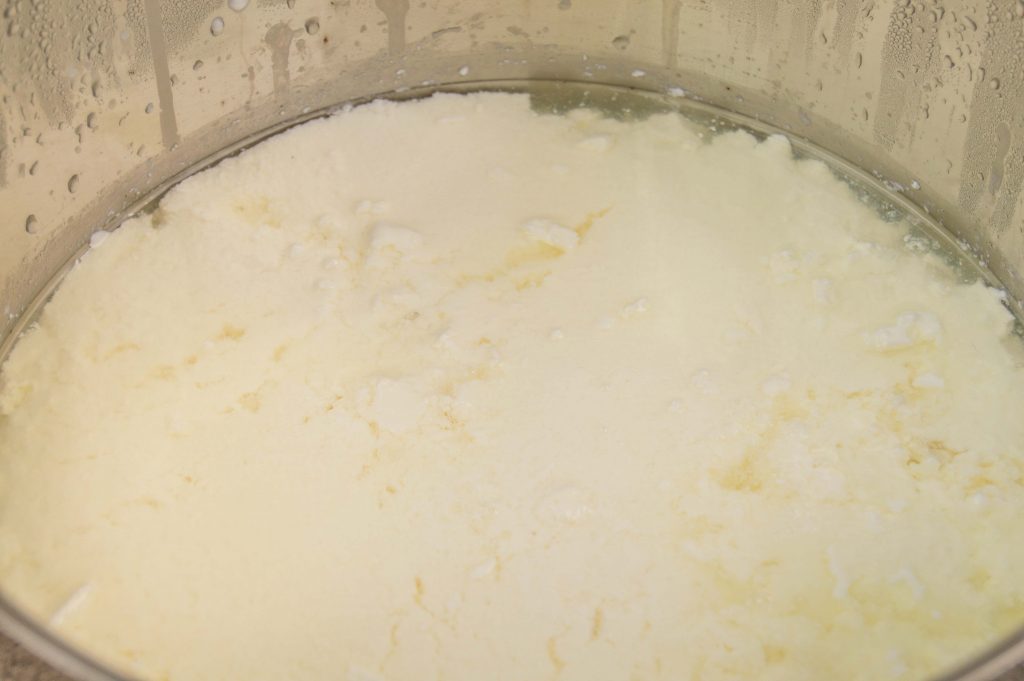 Separate the whey from cheese using a strainer… 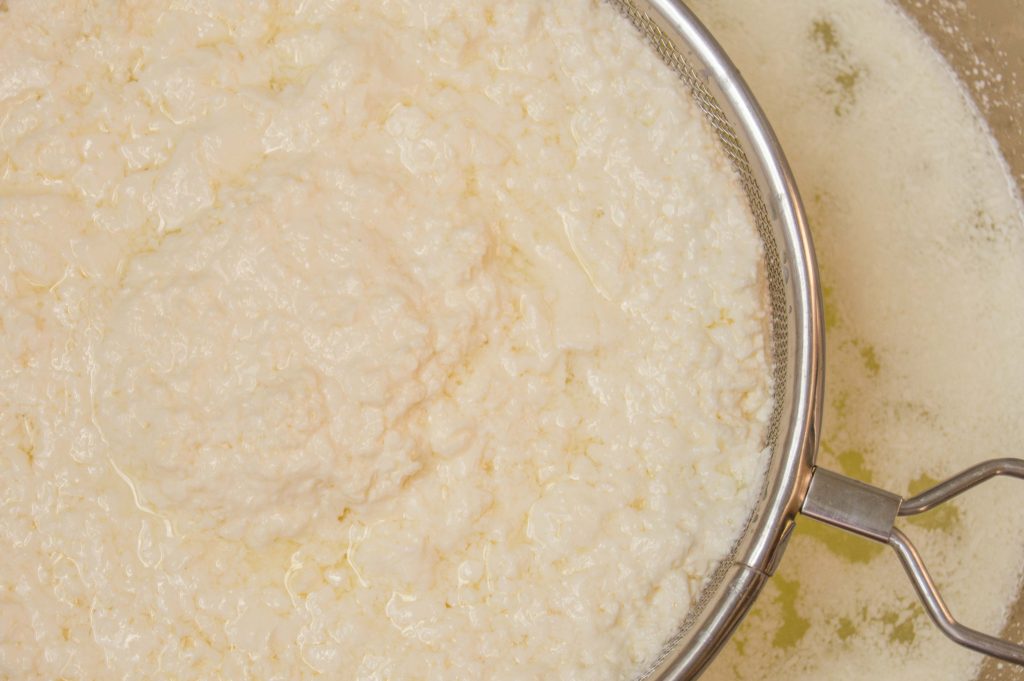 … and it’s ready to eat! (check the full recipe below) 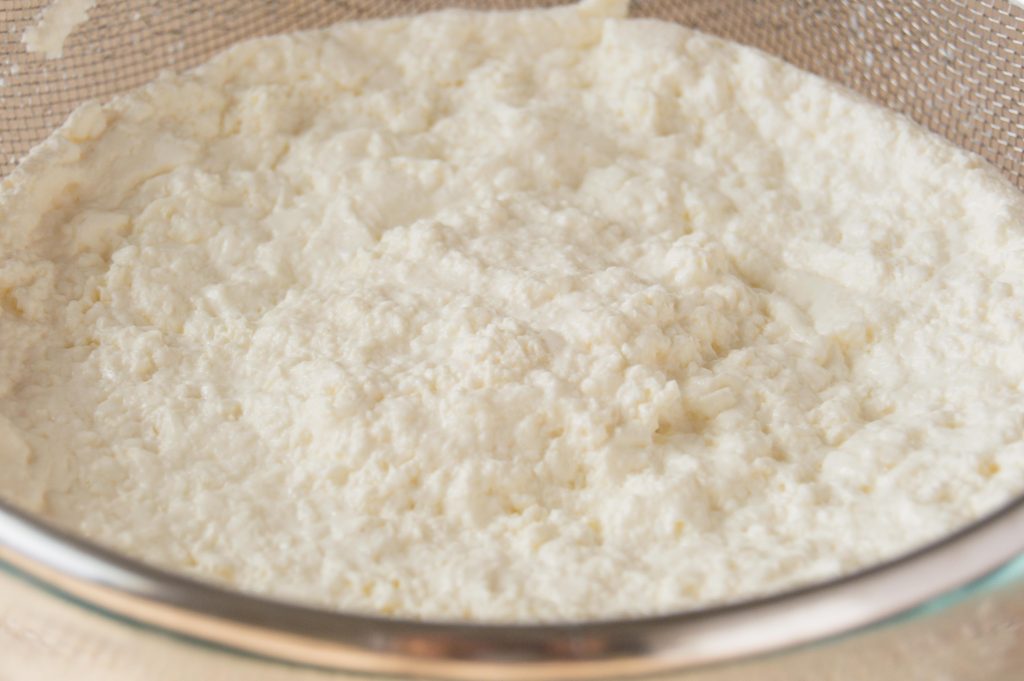 I know that the idea of preparing something for three days sounds scary but there’s very little work involved on your part: acid does all the work for you. By the way, the whey that you separate from cheese is edible too, you can use it to make delicious crepes!

The “Nobody’s Got Time For That” Tvorog Recipe

The name is pretty self-explanatory. Although the recipe above is unpretentious, it might be hard to keep your mind on something like cottage cheese for three days. Or, maybe, the craving is so bad you absolutely, no questions asked, must have tvorog right this minute! There’s a way to make it which will only take 30 minutes of your precious time.

Once again we are going to add acid to milk ourselves, but this time we will use a more concentrated option: lime or lemon juice. Acid works slow if you leave milk at cold or room temperature (as we have seen in the previous recipe, it took over 48 hours), so in order to speed up the process we need to heat the milk up. Then the separation of whey happens within minutes. The only disadvantage is that the yield in this recipe is low: approximately 2 cups of cottage cheese from 1/2 gallon of milk (check the recipe below). 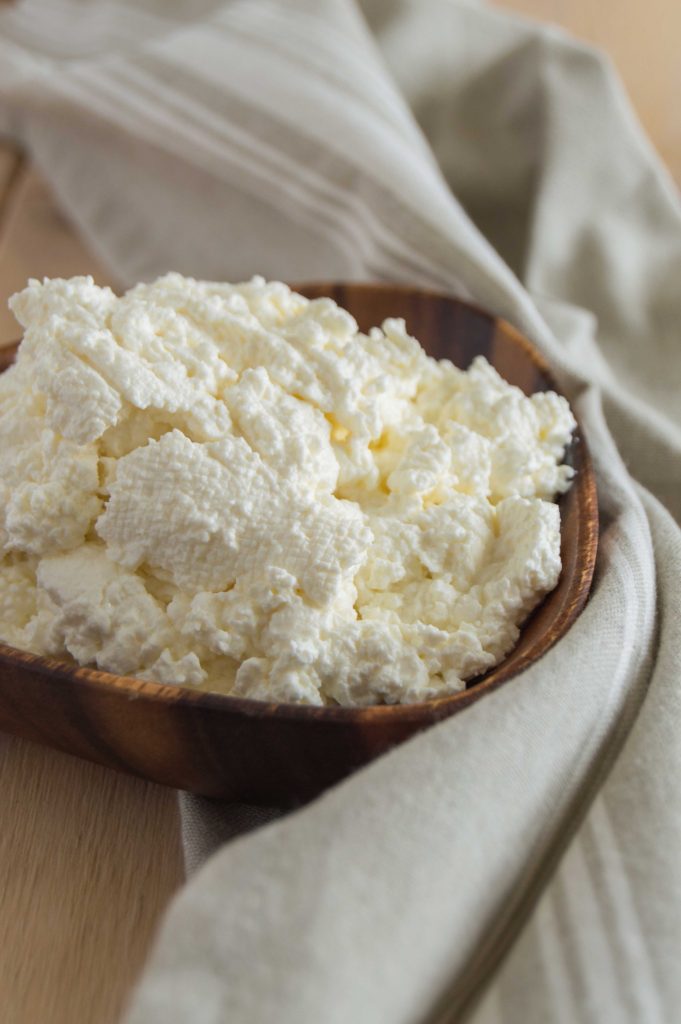 The Science Behind Making Russian Tvorog

“The first thing to realize is that milk is actually made up of a lot of different components, the main ones being protein, fat, and water. When it comes to curdling, we’re mainly concerned with one specific milk protein called casein.

When milk becomes too acidic, like when we add lemon juice or when it goes sour, the negative charge on the casein groupings becomes neutralized. Now instead of pushing each other apart, the casein starts to clump together. Eventually large enough clumps are formed that we can actually see the separation, and then we have curdled milk.”

The recipes below will, probably, be most popular among Russian expats who, just like myself, are suffering from lack of good tvorog. If you are not Russian, you might be wondering: why go through the trouble? Because once you make it at home you will never be able to eat store-bought cottage cheese again — it doesn’t stand comparison. Besides, there are many delicious dishes you can make using Russian tvorog. Here are three of my favorite recipes using Russian cottage cheese. 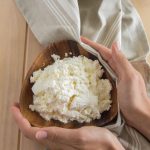 The Realistic Way of Making Tvorog 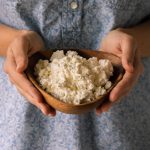 The Fast Way to Make Tvorog

This recipe doesn’t have to be precise. I usually prepare cottage cheese at a glance. So if you see that after adding lime juice milk isn’t curdling well, don’t be afraid to add a little more. Some limes are juicier than others. Make sure to add a little at a time.

Don’t pour out the whey. Although it looks extremely weird, you can use it to make delicious crepes! 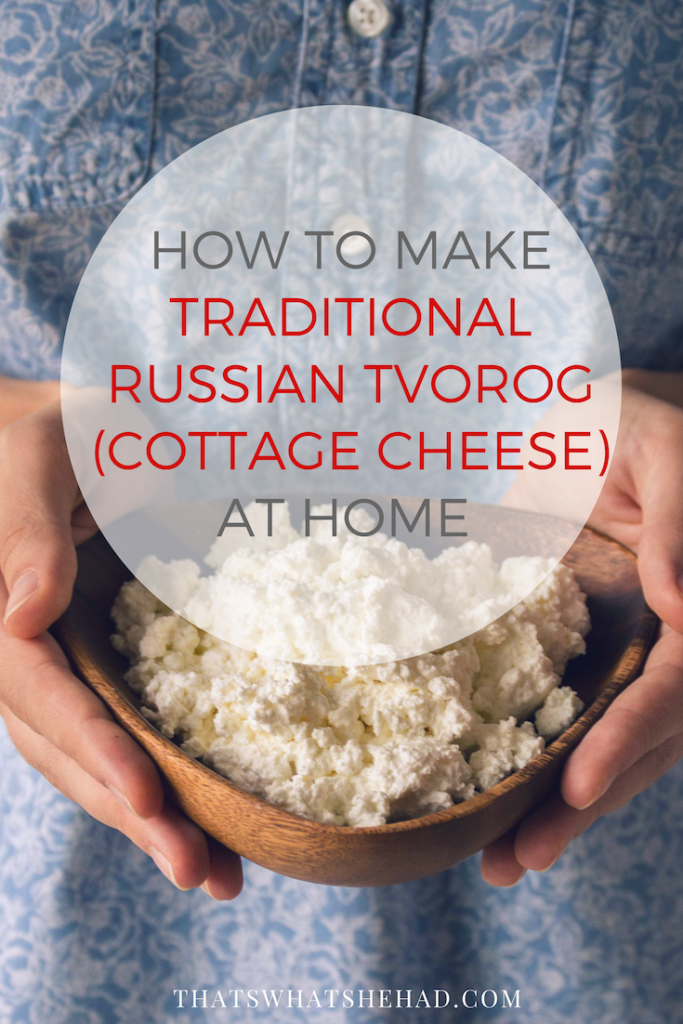 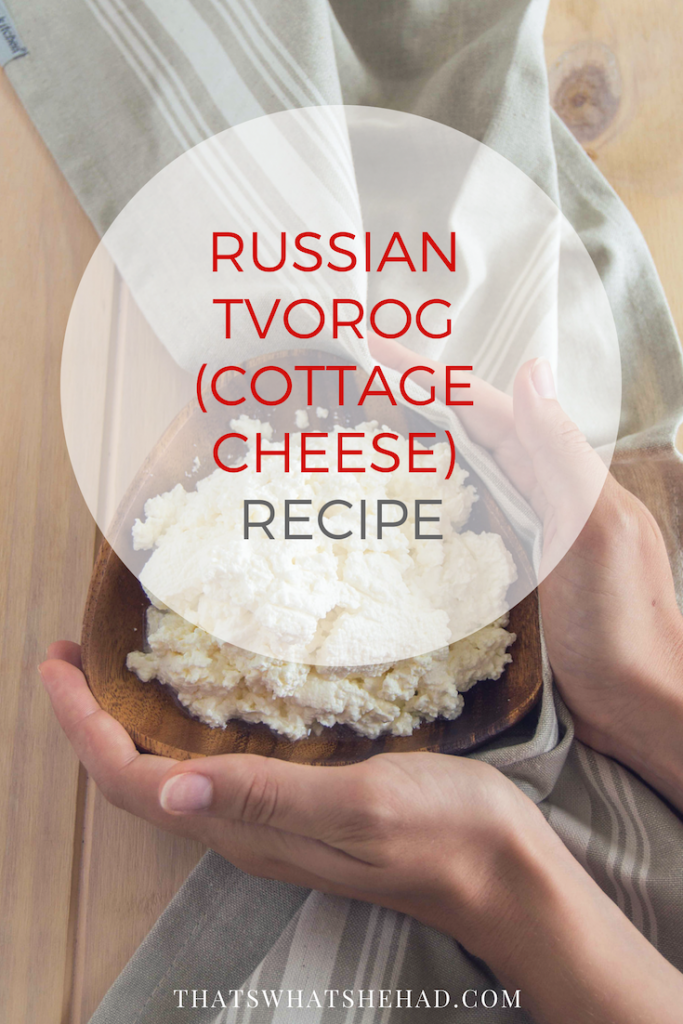