Everything You Need to Know About Sri Lankan Kiribath

My first memory of kiribath goes back to 2013 New Year celebrations in Sri Lanka. Not the kind of New Year you greet on the last day of December with a glass of champagne in hand; but the kind you welcome on the 13th of April with rice, deep fried pastries, and a fire pit in the middle of the living room. Sinhalese and Tamil New Year.

It couldn’t be the first time I had Sri Lankan milk rice, but it is definitely the most vivid memory of eating kitibath I have. Probably, because you remember food better when somebody puts it in your mouth while you are facing North at six in the morning. I will return to this memory later on. 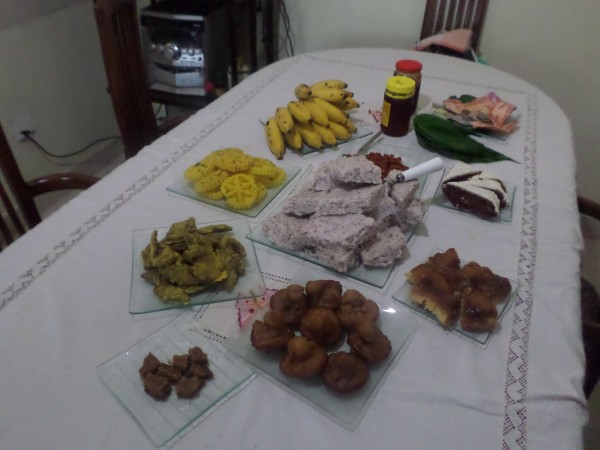 New Year table in Sri Lanka during 2013 celebrations in my family’s house.

Kiribath, or traditional Sri Lankan milk rice, is prepared for special occasions like birthdays, weddings, New Year, or moving into a new house. Wikipedia suggests that Sri Lankans also make it on the first day of every month. Maybe it was done decades ago and maybe you can find somebody who still does it, but it’s definitely not common. 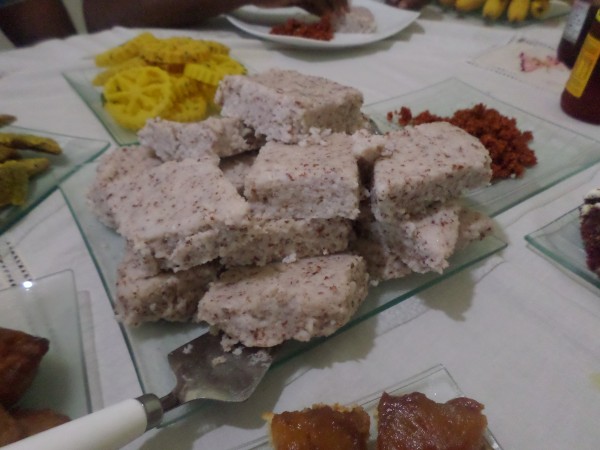 Kiribath is also the first meal babies have when they transition from breast milk to solid food at the age of six months. I have to explain this one, since when I heard it first, my jaw dropped: “Whaaaaat? Six-months-old babies eat rice?” They don’t really. It’s more of a ritual when kiribath is prepared for family and friends who gather to celebrate this transition. The baby gets only one symbolic grain of rice.

The reason kiribath is prepared for special occasions is that rice and coconut milk, being the main ingredients of Sri Lankan cuisine, symbolize prosperity. 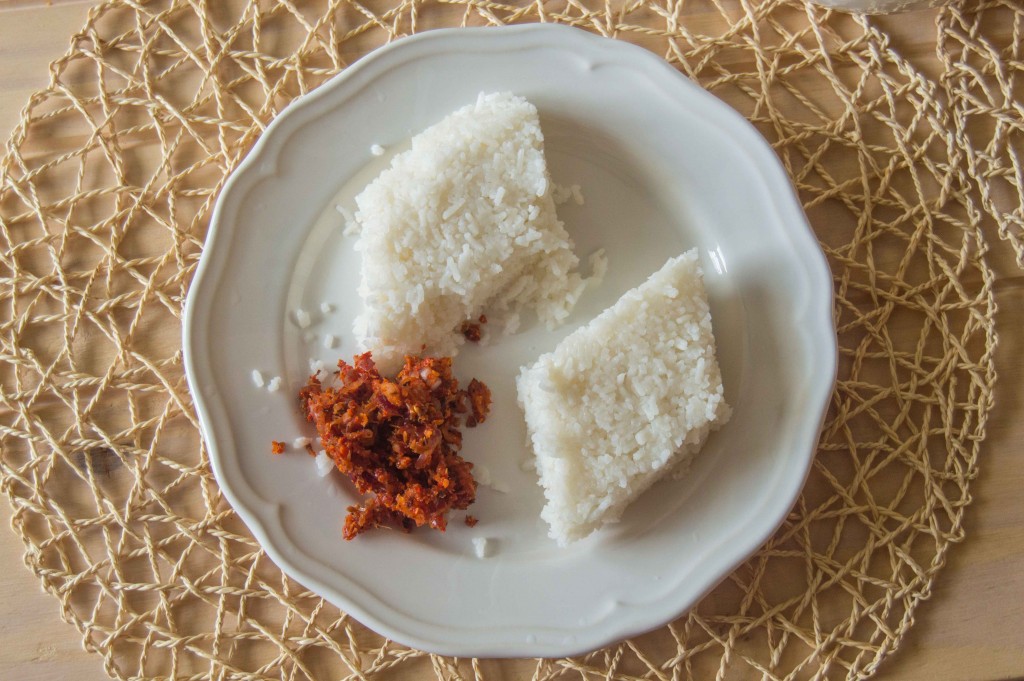 Since my mother-in-law is visiting us from Sri Lanka, we are making kiribath for breakfast today. Well, let me be honest here… She is making it and I am watching. Preparations start with choosing the right type of rice. The one you need is called samba kekulu which can be white or red. Choosing one or another only depends on your personal preferences. Since we are preparing kiribath in the heart of Texas, Austin, and not in Sri Lanka, the best I could get here was basmathi rice. It’s not usually used for kiribath, but it works quite well if you don’t have other options.

In my humble opinion, bamathi is even better. Why? Because samba rice has a very strong and not the most pleasant smell. Unaware of this little detail, the first time I cooked samba rice in Colombo I couldn’t stop circling the kitchen trying to place the smell that appeared out of nowhere. Until I realized it’s the rice on the stove. People in Sri Lanka would always  tell me the smell disappears once the rice is done. It doesn’t. So basmathi it is!

Interesting thing about cooking rice in Sri Lanka is how you measure ingredients. In USA people use cups, in European countries — grams and milliliters, in Sri Lanka people use fingers. Rice is simply poured into a pan, then water is added. If you insert your index finger into a pan and touch the top of rice, water shouldn’t be higher than the first phalange of your finger, if you cook samba rice. And only as high as half of the first phalange if you cook basmathi. 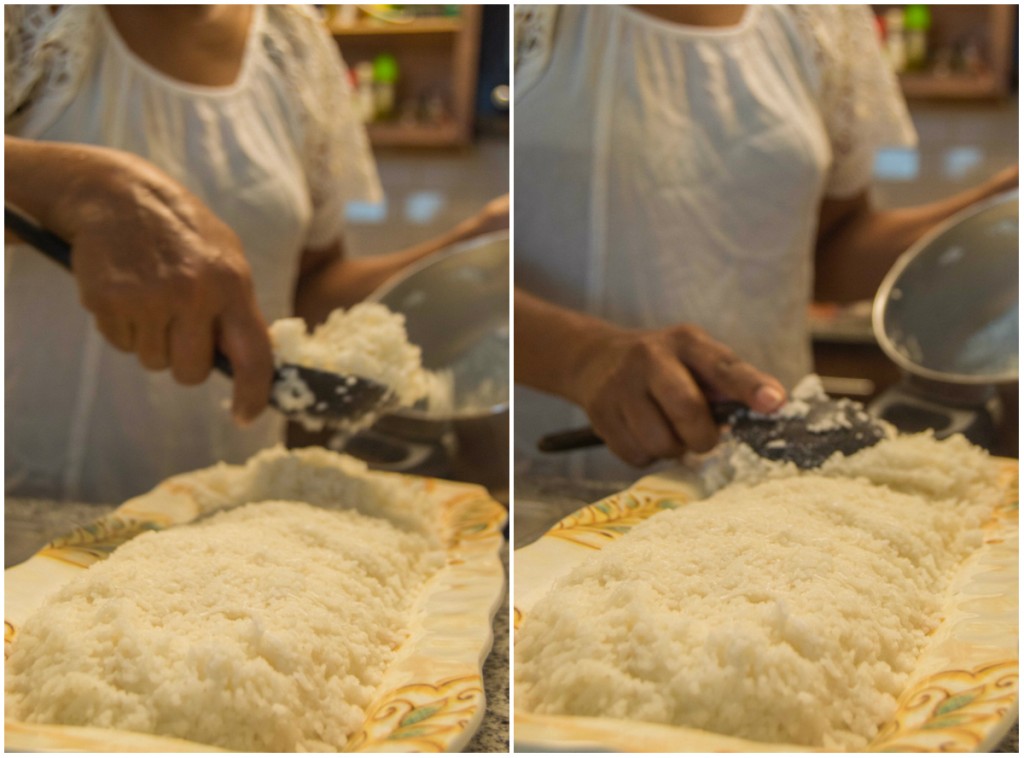 Transferring cooked rice onto a plate

Coconut milk is added at the last stage, when rice is almost ready. Rice in Sinahlese language is bath and milk is kiri, hence the name kiribath. Coconut milk is extracted from a scraped coconut by squeezing the flesh. Since breaking and scraping a coconut in Austin’s apartment would be messy, we prepared kiribath using canned coconut milk. The right consistency is a bit tricky to achieve. It should be moist and sticky enough to form a block.

Then comes the most surprising part: cutting rice into pieces. It would never occur to me to cut grains with a knife but the mixture is so sticky, it looks more like a cake than porridge: you can pick up a piece with your fingers. 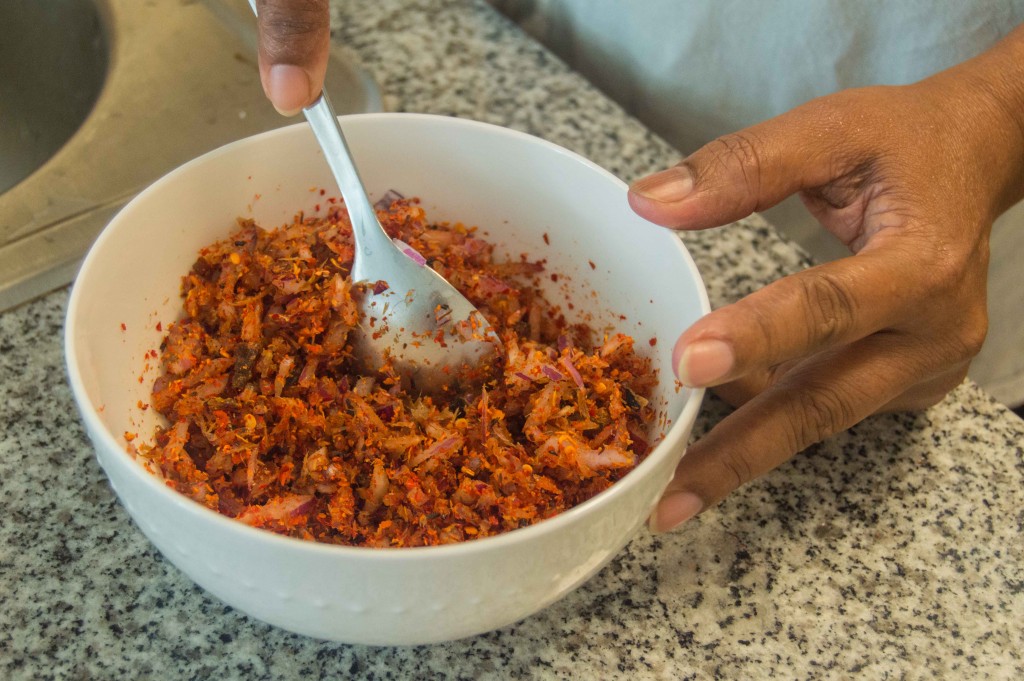 Eating kiribath with a spicy onion relish is another revelation. Milk rice, in my culture, calls for something sweet like honey and berries. That’s exactly how my mother would serve it when I was little (milk rice would mean addition of cow milk, though, not coconut milk). But the most popular accompaniment for kiribath in Sri Lanka is lunu miris – a relish made of red onions, mixed with chili flakes, Maldive fish, salt, and lime.

Although very popular, lunu miris is not the only accompaniment to go hand in hand with kiribath. Seeni sambol, sweet onion relish, is another option. You can also make kiribath sweet by adding honey, kithul treacle, or jaggery. 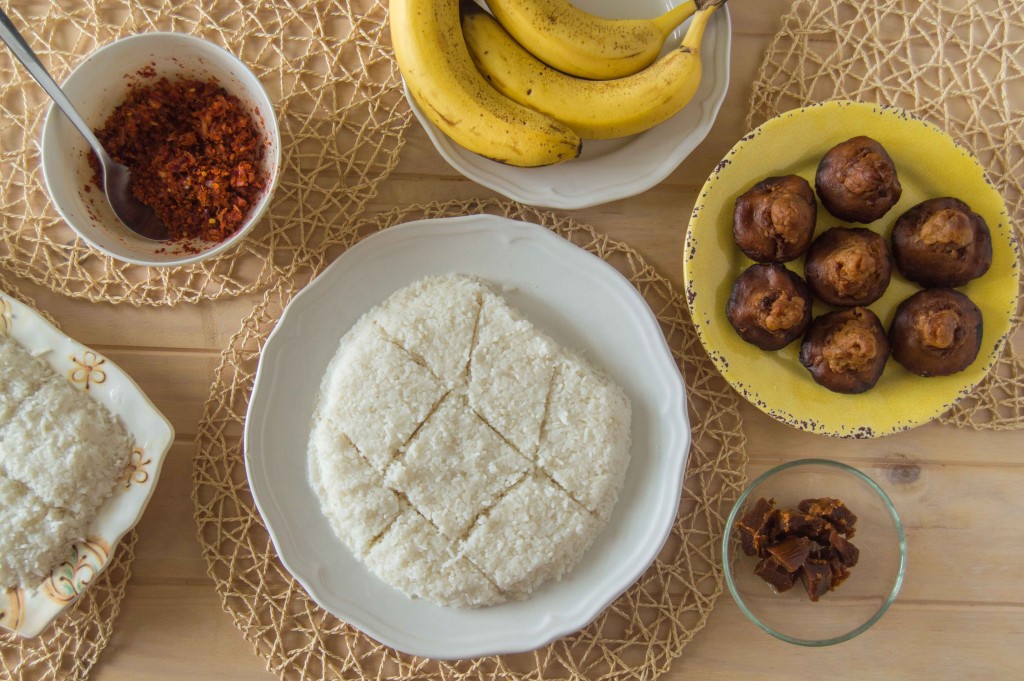 Kiribath with kithul treacle is exactly what I had during that memorable New Year in 2013. According to Sri Lankan traditions, before starting the meal, the head of the family has to give a small piece of kiribath to every family member. Little did I know back then that you make the fist bite facing a certain direction and at a time appointed by astrologist. It was six in the morning, when my future father in law turned me around and put a piece of kiribath in my mouth. I was sleepy, understood very little of what was going on, but chewed it dutifully.

Kiribath since then is a staple on my table during Sri Lankan celebrations. I use basmathi rice instead of samba and canned coconut milk instead of fresh coconut milk. It’s not the most authentic version, but definitely delicious. 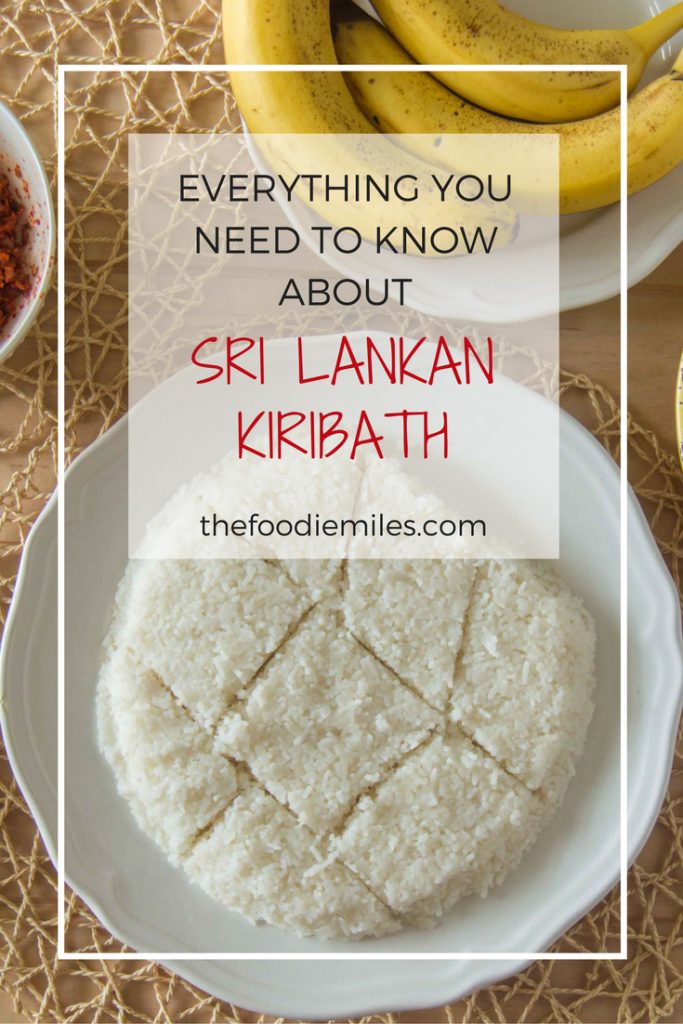