A few months before my big fat Sri Lankan wedding I learned that according to local traditions one of my male family members had to break a coconut during the ceremony. With a huge knife. At the first try. In front of over a hundred people. The closest my Russian relatives have ever come to a coconut is watching Bounty advertising. “The taste of paradise”, remember? Not only did they not know how to break a coconut, they haven’t even held one in their hands.

For Sri Lankans, on the other hand, breaking a coconut is second nature, not more complicated than brushing teeth or tying shoe laces. In fact, it’s part of the morning ritual for majority of women on the island: wake up before sunrise, have a cup of tea, start preparing lunch for the whole family by breaking and scraping out a coconut. Every day of the week. 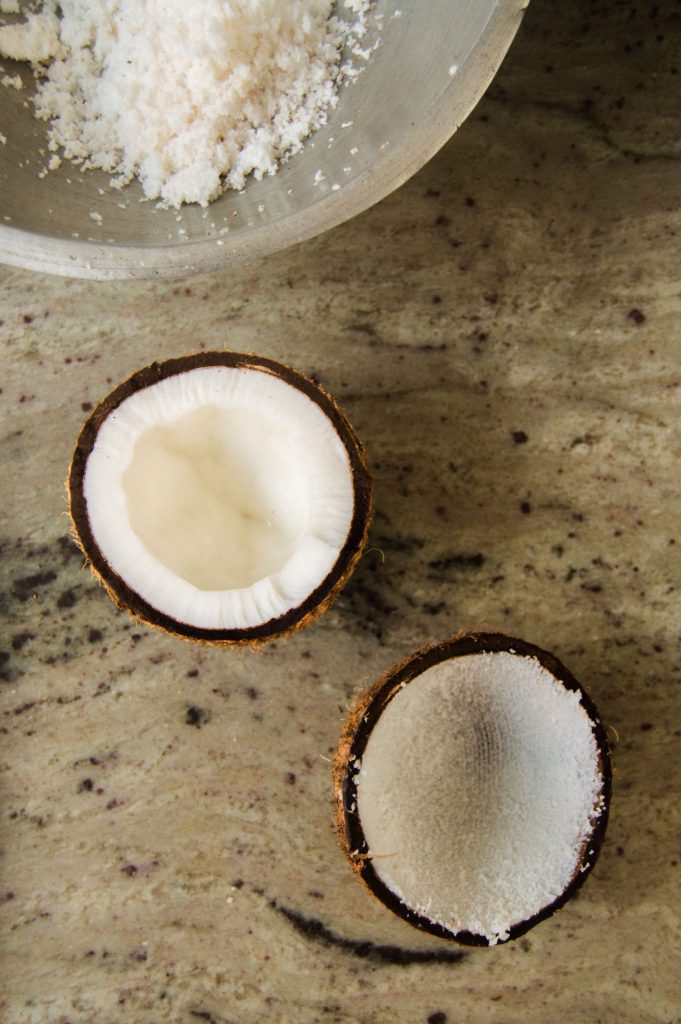 When a Lankan woman is breaking a coconut there’s grace, power and confidence in her movements. She doesn’t place it on the table or ground, she holds it firmly in her left hand and with a few precise hits with the back side of the knife breaks it into two. 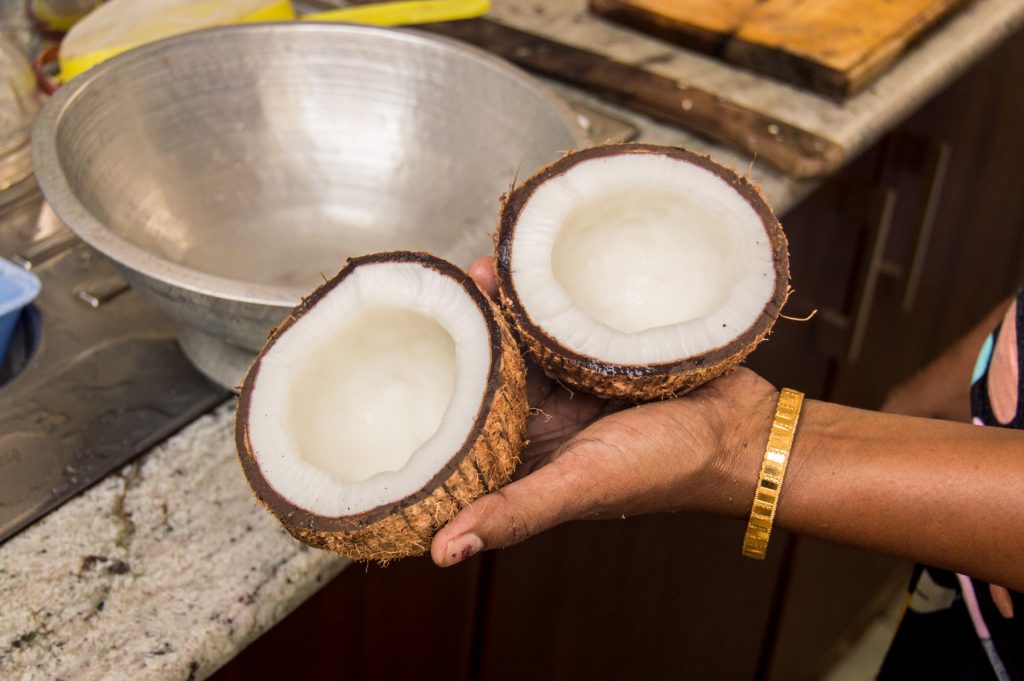 As unbelievable as it may sound, that is the easy part of the whole coconut handling process. After watching the aforementioned Bounty ads for many years, I was under the impression that coconut milk is the liquid inside the coconut that beautifully splashes out once you crack it open. Fool. Precious coconut milk requires much more work than that.

After pouring out water from the coconut without second thoughts, a woman proceeds to scrape out the white flesh out of the shell. Coconut scraper is as common in a Sri Lankan kitchen as a grater in a Western one. Only the device is more complicated and looks very much like an instrument of torture: a low wooden chair with an attached blade and a dish-holder. 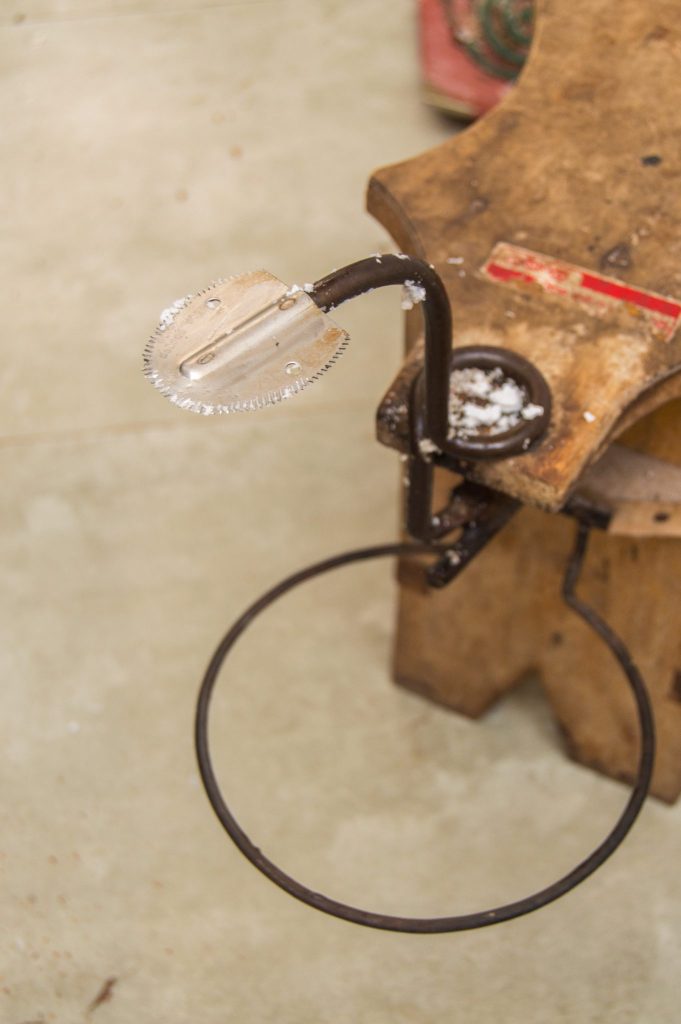 That’s where the hard work begins: the blade isn’t designed to move, instead you need to rub half-coconut on the blade until the shell is empty. Then repeat for the second half.

Using food processor to prepare coconut milk is an advantage of living in our day and age. In the olden days hands were the only device available. But even with a blender, the process is so laborious I doubt anybody can reproach women for adapting to the modern world. 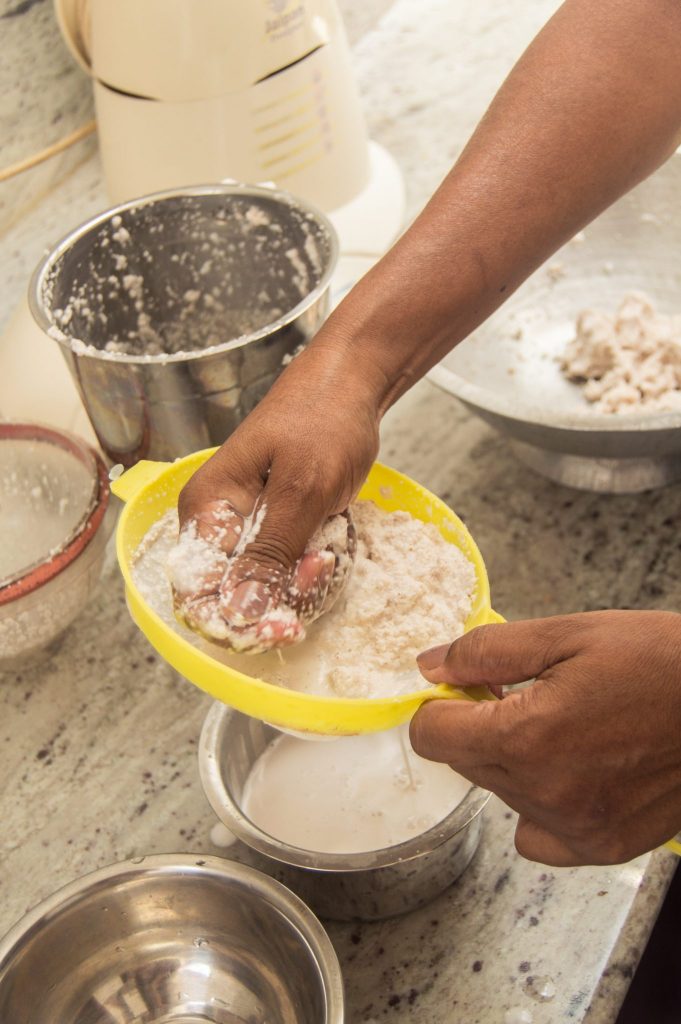 Blender makes it a little easier to squeeze milk out of coconut flesh. All the liquid you can get out of the flesh on the first try is called “first milk”. It’s fatty, creamy and thick.  The leftover coconut flesh is then mixed with water and squeezed again. This is “second milk”, less fatty and creamy. 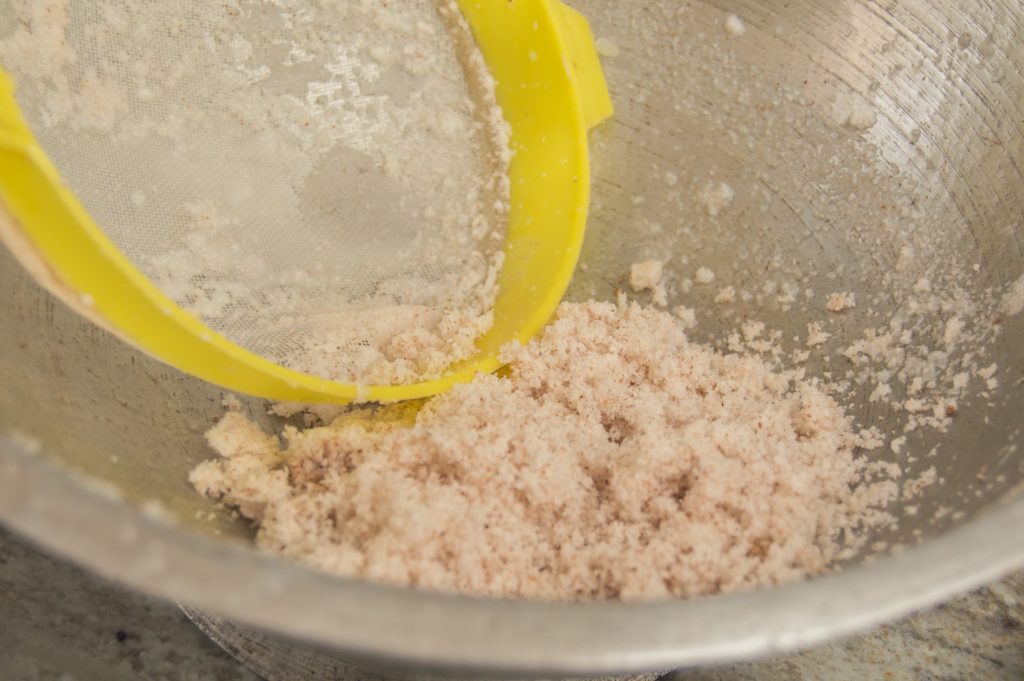 By now the coconut flesh looks very pitiful with all life drained from it, nevertheless, more water is added and more squeezing follows resulting in “third milk”, very watery and almost transparent.

All three kinds of milk can be frozen and used for a couple of days, but more often than not fresh milk is made every morning before cooking starts. That’s right, everything you’ve read so far is only an overture to the main act of cooking. 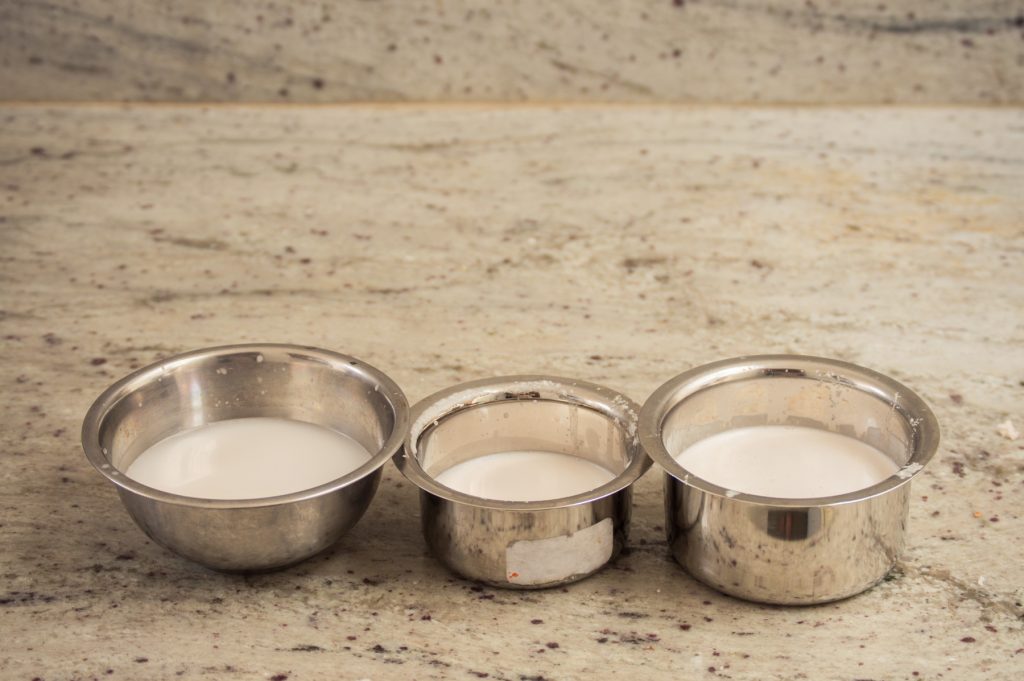 Raw coconut milk is essential in making curries. Third milk is used instead of or along with water for boiling, especially in making root vegetable curries that require longer preparation. First or second milk is added in the end of cooking process to add creaminess and flavor. It is also used in the making of traditional kiribath, rice prepared for every special occasion.

If not in the form of milk, coconut will find its way to Sri Lankan table anyways. Coconut oil is great for frying. Shredded coconut makes a good addition to mellums (green salads). Even flat breads – roti – are made by mixing in coconut into the dough.

Coconuts go beyond cooking, with husk used as a sponge for scrubbing and shell to make spoons and dishes. But to grasp the full meaning of these nuts in Sri Lankan culture, remember that not one wedding can take place without a coconut being broken. When bride and groom step down from the pedestal on which they stay during the ceremony it is considered bad luck if guests look at them. The loud sound of the coconut being broken with a knife is supposed to distract guests and make them look away. 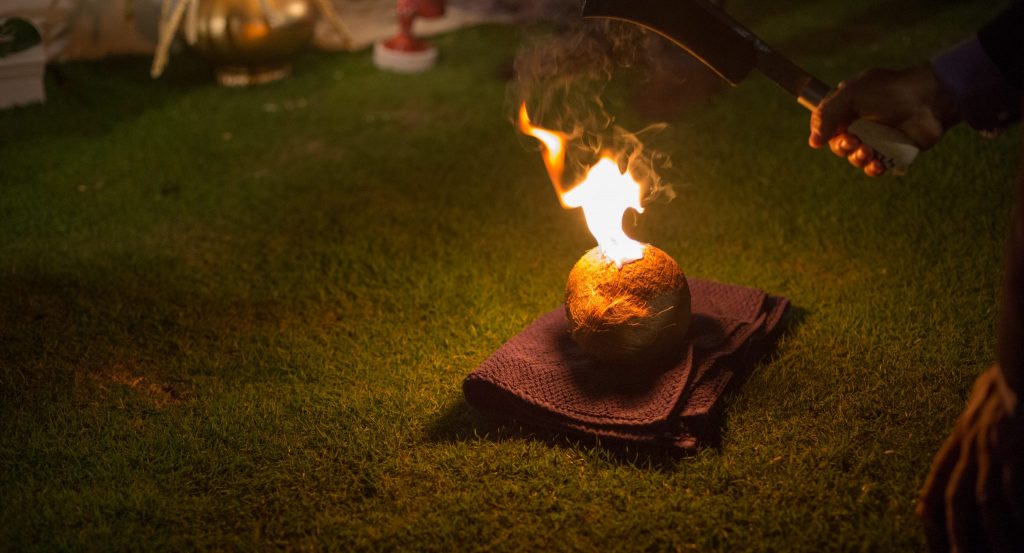 Oh, forgot to tell you! During the wedding ceremony, before being cut in two the coconut is set on fire and handed over to the unsuspecting bride and groom. Very spectacular Sri Lankan wedding are! (Photo credit: Amarante Studio)

After not a very long consideration whether my clueless relatives should risk cutting their hands off while protecting me from being jinxed, I decided against it and asked my fiancé’s uncle to do it. And he did a very good job: the coconut cracked at the first hit and no hands were harmed in the making a wife out of me.

P.S. In case there are people out there as inexperienced in questions of coconuts as I was before setting foot on the island, coconut water we all love to drink so much comes from a different type of coconut called thambili (King coconut). 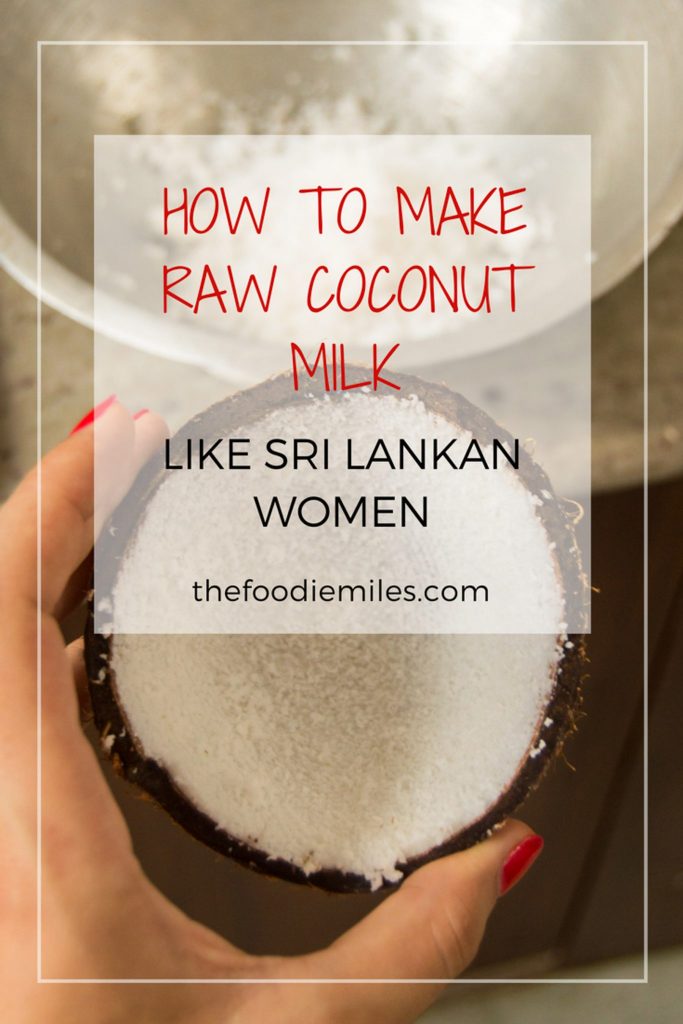