The Time I Took Part in a Traditional Mexican Tamalada

I first heard the word “tamale” at a local stand-up comedy club, upon moving to Austin. Having relocated to the Texas capital recently, just like myself, the comedian told a story of  his first encounter with tamales — that is how instead of unwrapping the corn husk he sucked the filling out of it.

To avoid getting myself into an awkward situation like that I was determined to learn more about tamales. And, as it always happens, when you wish for something bad enough, it comes in the most unexpected way. I received not one, but two tamalada invitations within one week which I think was a sign from above. Here’s how I took part in a traditional Mexican tamalada with my friend Adriana’s family! 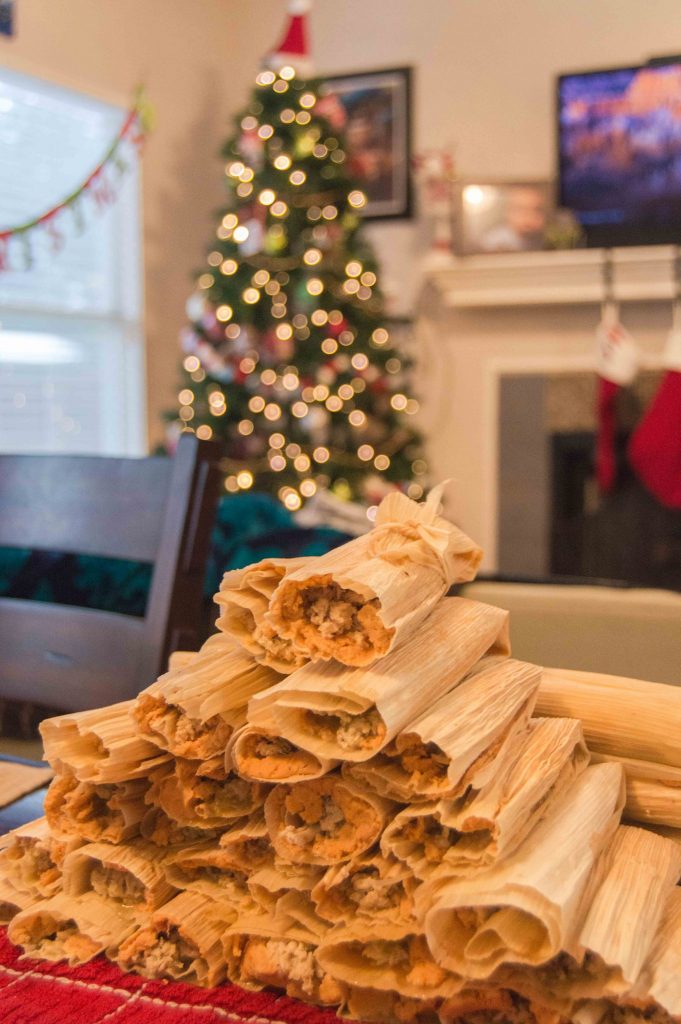 One a rainy Saturday in the beginning of December I spent 7 hours making tamales from scratch with Adriana, an Austin-based blogger behind Jack’s mom in Austin, and her sister Christina. Their parents moved to USA from a small town of Teran, Mexico, before Adriana was born. The girls were raised in Edinburg, Texas, just half an hour away from the border with Mexico. 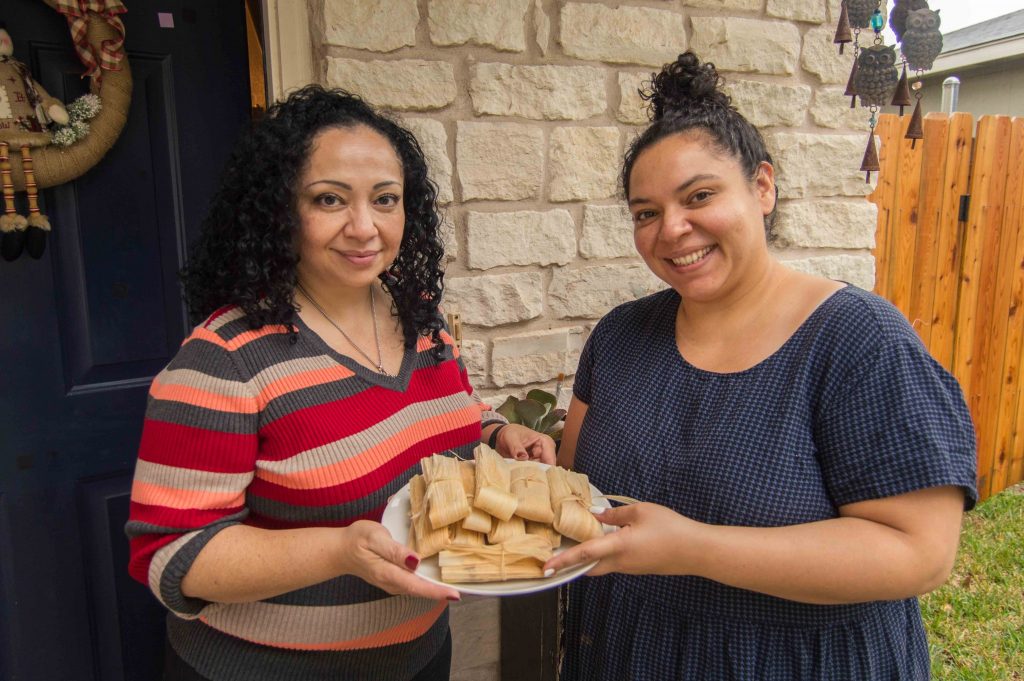 Adriana and Christina with a plate of freshly prepared tamales

Being an immigrant myself, I couldn’t help but think what it feels like to live in a foreign country with an opportunity to go back to your Motherland within 30 minutes. Going home for me means spending 15 hours and a thousand dollars. Going home for Adriana’s parents was an ordinary trip every other weekend when her mother had to do groceries or her father wished to have a haircut at his friend’s barber shop.

Staying so close to the roots helped to preserve family traditions, like making tamales before Christmas. For many Mexican families, tamalada, the process of getting together with your loved ones for a day of cooking tamales, is a way to teach younger generation about the culture and the concept of sharing everything from work responsibilities to delicious meal by the end of the day. 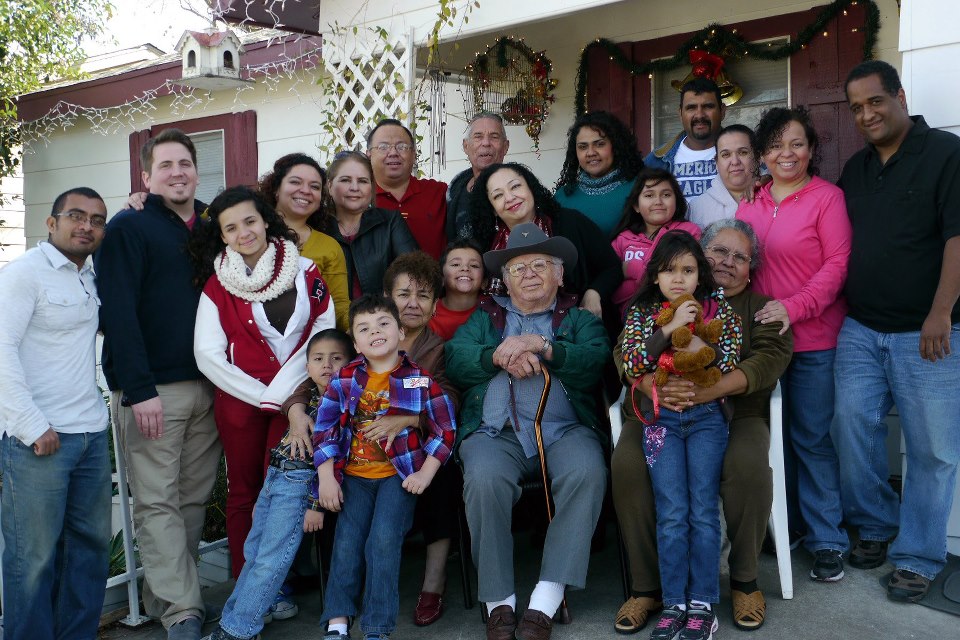 Adriana’s family during their annual tamalada 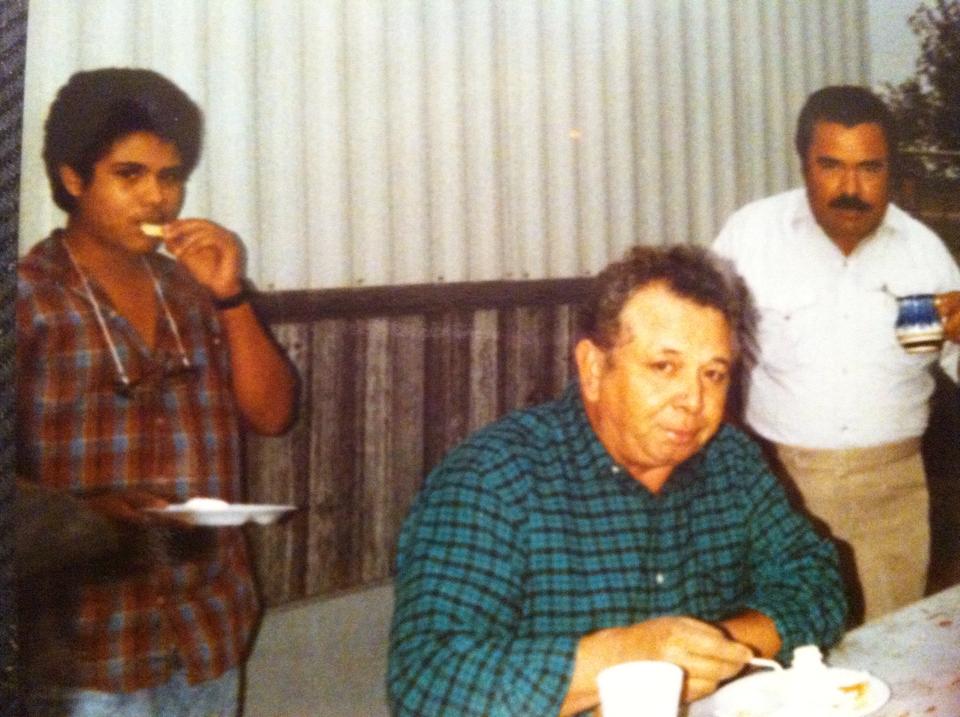 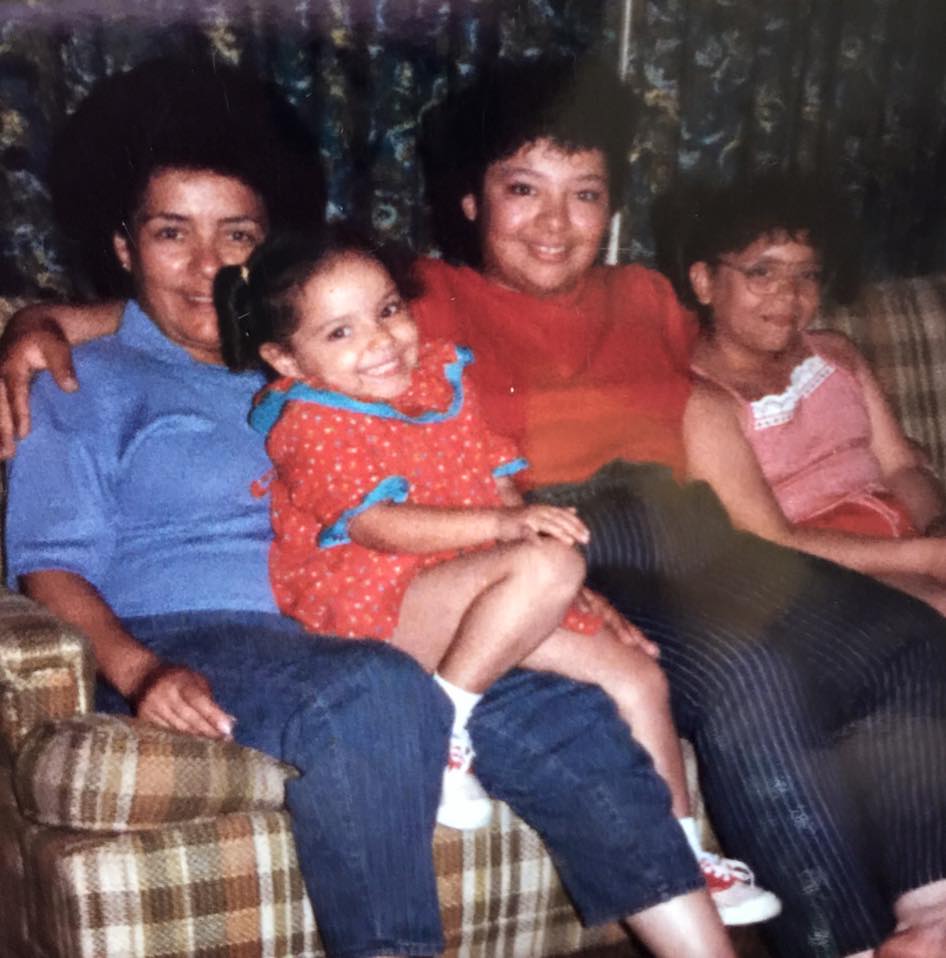 Making tamales has always been largely a women’s domain when grannies and mothers would pass their knowledge to younger girls in the family. When I came to Adriana’s house early that Saturday, she confided that herself and Christina were “piecing together the memories of their grandmother preparing tamales and cheating a little by watching YouTube videos.” To give me a general idea of tamales, Adriana suggested to think of corn dough with a filling inside, all wrapped in corn husk and steamed. 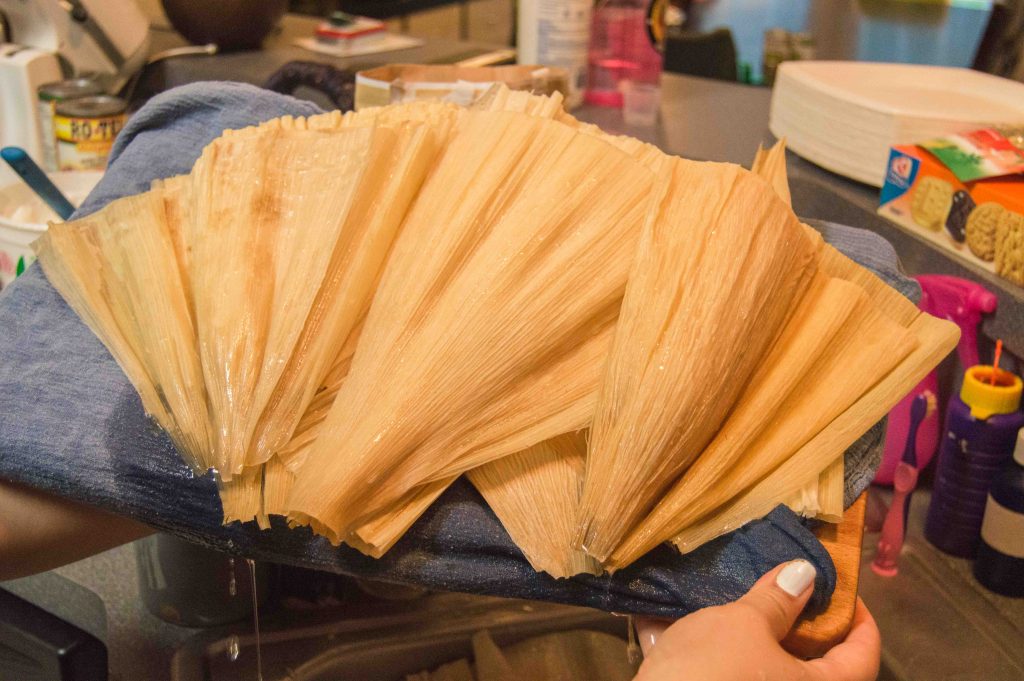 The preparation began the day before when Adriana soaked corn husks in water overnight and slow-cooked the chicken for the filling. By the time I arrived, Adriana started working on masa, dough made of corn flour.

Corn has always been the centerpiece of Mexican diet. M. Dustin Knepp, who specializes in Latino and Latin American Cultural Studies at the University of Central Arkansas, wrote in his essay “Spreading Tradition: A History of Tamales-making and its Representation in Latino Children’s Literature”:

“As the staple crop of the Americas, maize was the “all-important carbohydrate source the lack of which meant famine and the presence of which, even alone, meant that one was fed and contented”. Capable of being consumed in a plethora of ways, two of the most pervasive preparations of maize were in the form of tortillas and tamales.”

Another important ingredient in tamales is animal lard. Cornmeal and fat make the body of masa, while spicy sauce prepared of chili peppers, onion, garlic, oregano, and cumin adds flavor and color to the dough. 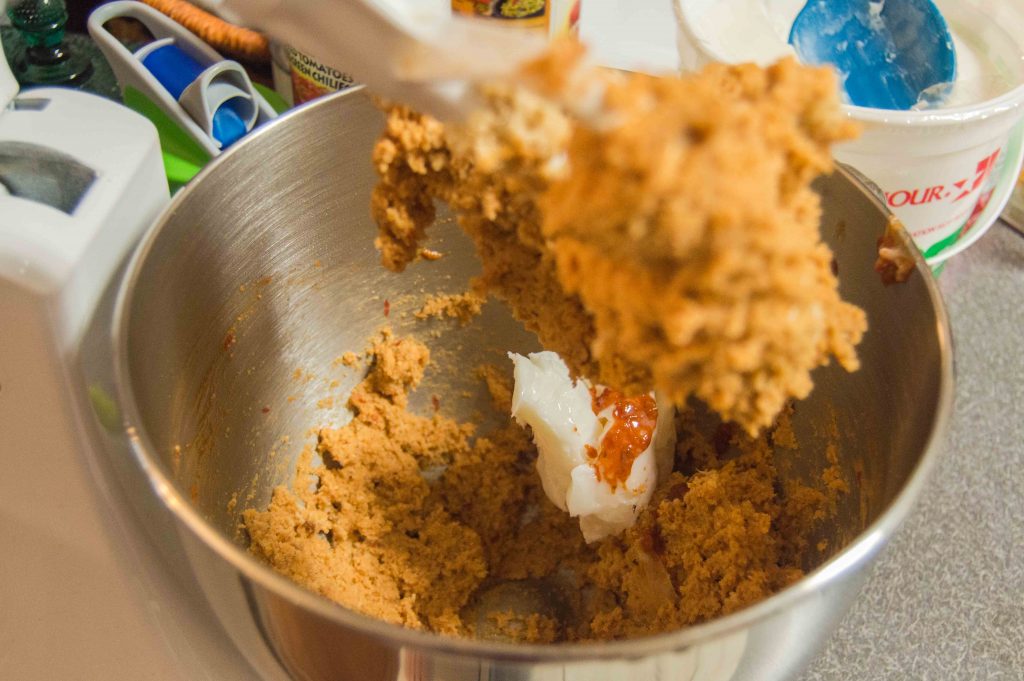 Tamales had been a staple in Mexico long before the Spaniards arrived. But here’s where the main difference lies: while indigenous people used plant-based oils or, according to some accounts, no oils at all, after Spanish started importing pork, animal lard became a widely used ingredient.

“… many records exist indicating the indigenous dislike of and aversion to animal fats used widely by the Europeans. This fact, combined with the absence of large meat-producing animals like goats, sheep, pigs and cattle prior to the conquest, helps to illustrate two of the biggest changes in tamales over the centuries. Indigenous tamales would have been greaseless with a denser masa, filled with native ingredients like turkey or other meat sources like rabbits, amphibians, and rodents, or available greens, herbs, plants, and fruits. Today, the masa for tamales is typically mixed with large quantities of some sort of lipid, whether shortening, oil, or lard, and pork is one of the more common fillings, especially in parts of Mexico and the borderlands of the southwestern United States.” 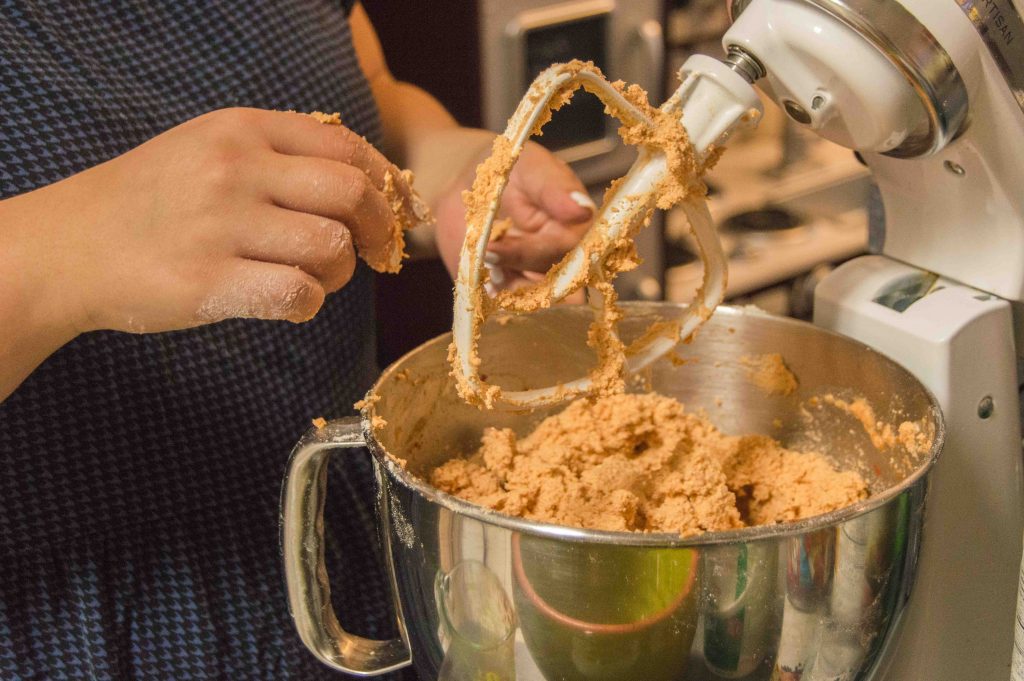 Adriana checking the consistency of masa.

While mixing cornmeal with lard in a kitchen processor, Adriana recalled the trips she took with her family to Mexico as a child:

“There were four or five tiny streets that were not even paved, just dirt road with small houses and farms… and that was the whole village. When I was little, coming from South Texas to visit scared me a lot: dirt floor, no running water, a toilet located outside the house. It was like a little shed. And my mother would always put a toilet sit on top so you don’t end up with splinters in your behind. I wish I appreciated it more at the time… It’s like camping for Americans.”

Since many families lived poor, killing a pig meant you have to use every part of it and utilize it quickly because there was no place to store the meat. Not only pork lard became an essential part of masa, but pork meat – a common filling for tamales.

When masa is thoroughly mixed, Adriana checked readiness by using her grandmother’s trick and dropping a little ball of dough into cold water. If the ball floats, the masa is perfect. Sitting around the table covered with bowls of masa, chicken filling, refried beans and salsa verde, we started the rolling process. Spreading masa on a corn husk is not as easy a task as it may seem. The dough sticks to the spoon, hands, and anything else around, but the corn husk.

The problem was solved by one Mexican grandma who, in a recent YouTube video, suggested to use a construction spatula in order to easily spread masa on a corn husk. Grandmas know what they are doing. The spatula makes the process way faster.

For tamales de pollo we used chicken thighs and salsa verde, for tamales de frijole – refried beans and queso fresco (a type of cheese). The variations of fillings are countless: from different types of meat to vegetables to fruits and raisins (in case you want a sweet option).

Each tamal is rolled up, and some are even tied with a bow for an extra fancy look. I have to admit that I rolled not more than five tamales while Adriana and Christina made several dozens each. Half way through we stoped for a lunch break and enjoyed Torchy’s tacos without realizing that even our quick meal that day had Mexican influence. 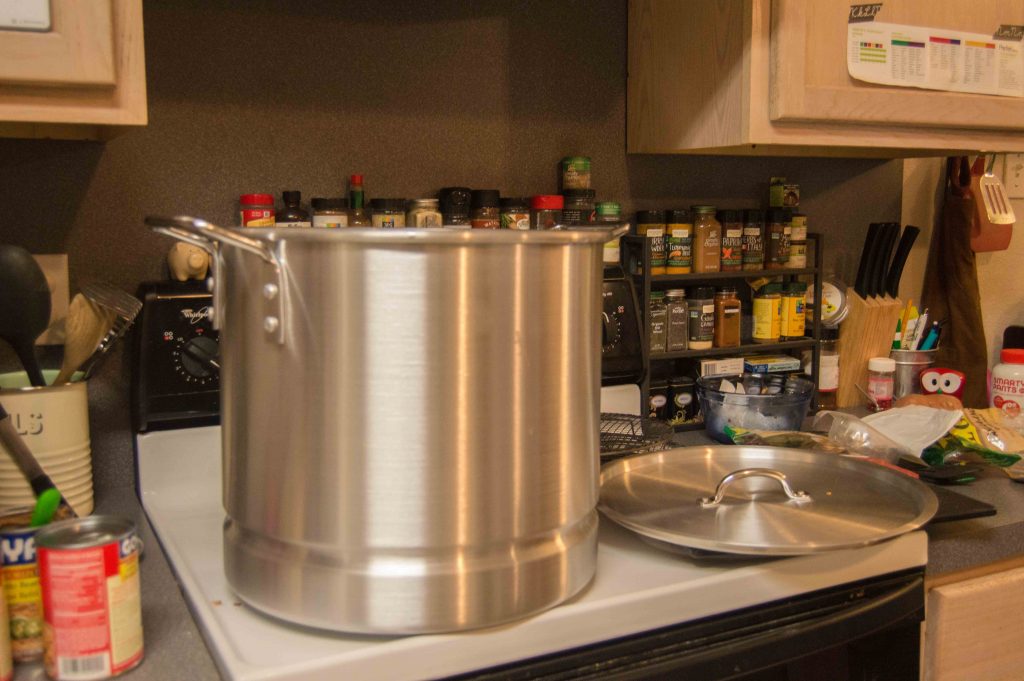 To cook tamales one needs a tamalera. If that sounds scary think of a steaming pot. This is probably the biggest pot I have ever seen, but when you cook seven dozens of tamales your tamalera better be a spacious one. 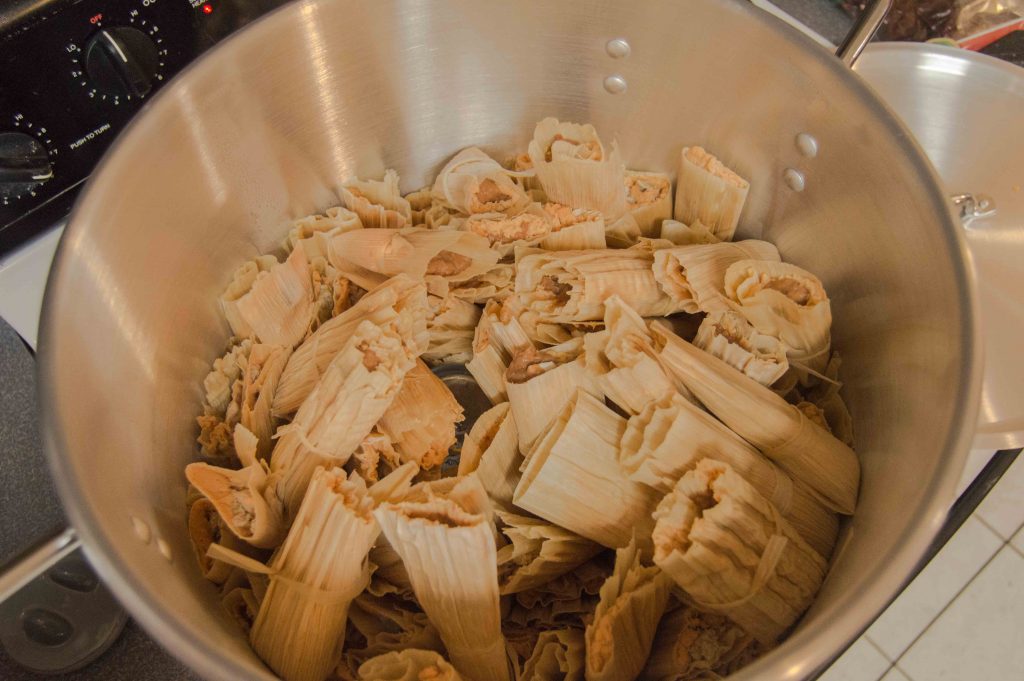 Arranging tamales in a tamalera

Three hours of steaming gave us plenty of time to chat about American cuisine, healthy alternatives to not-so-healthy but delicious Mexican foods, and kids. Adriana is a mother of almost three-year-old Jack for whom that day was an introduction to tamales. Just as it was for me. 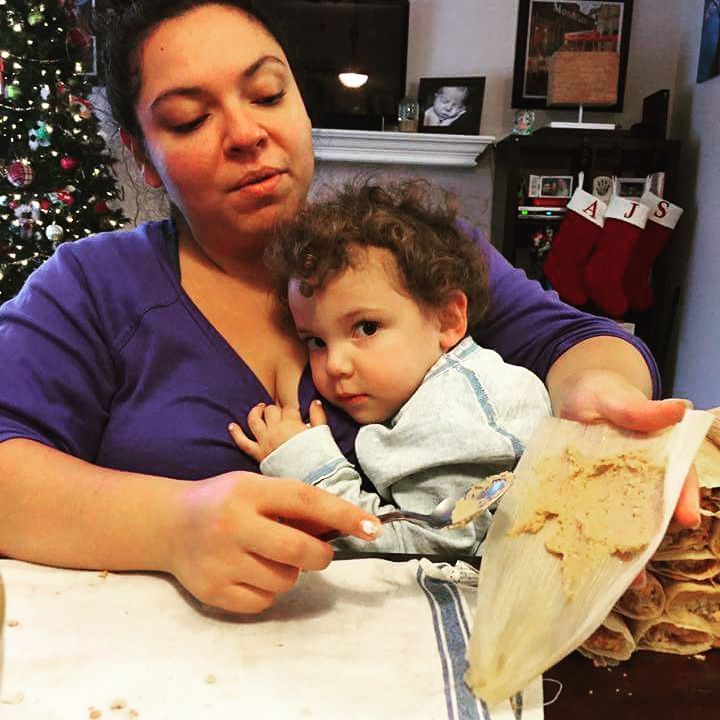 Prior to tamalada, Jack had received a children’s book “Too many tamales” by Gary Soto from his mom, so I can confidently say that he knew much more about tamales than I did. 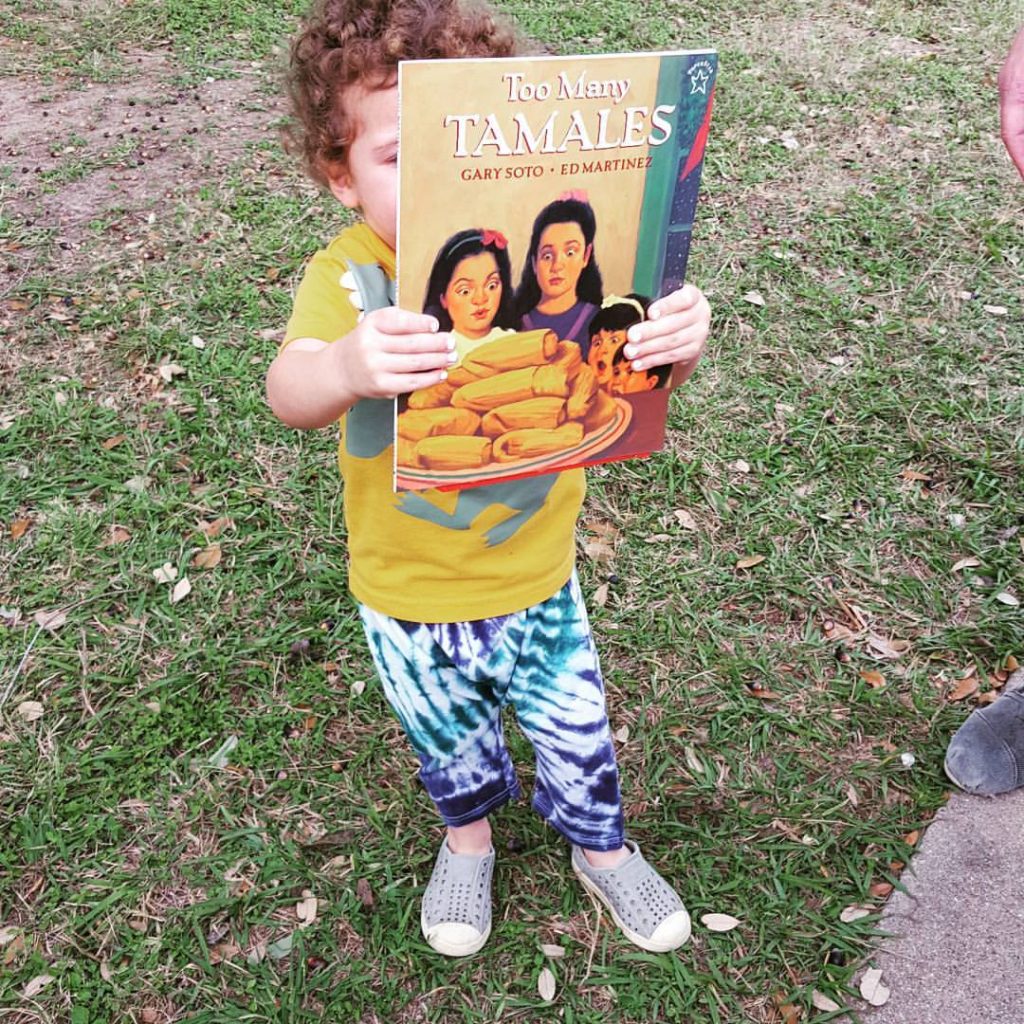 Jack with his new book “Too Many Tamales” (Photo credit: Adriana Cantu)

In the book, a little girl Maria is making tamales with her mother, and, in an attempt to play grown-up, the girl puts on mom’s wedding ring while kneading masa. When tamales are ready, she realizes the ring is gone and it’s most likely inside one of the corn husks. Before her mom can notice the loss, Maria asks her cousins to help her eat all the tamales and find the ring which they happily do. It turns out later that Maria’s mother had found the ring in masa right away, but a whole batch of tamales is now gone. So all the family members gather to make more.

What’s really shown to kids in this book is how tamales bring the whole family together. When analyzing “Too many tamales” M. Dustin Knepp says,

“In Soto’s book, the collective effort is doubly presented, first when the children come together to help Maria eat the tamales in the attempt to find the ring, and second when the extended family works together to help create another batch of tamales and to rescue Maria from her feelings of guilt and embarrassment.” 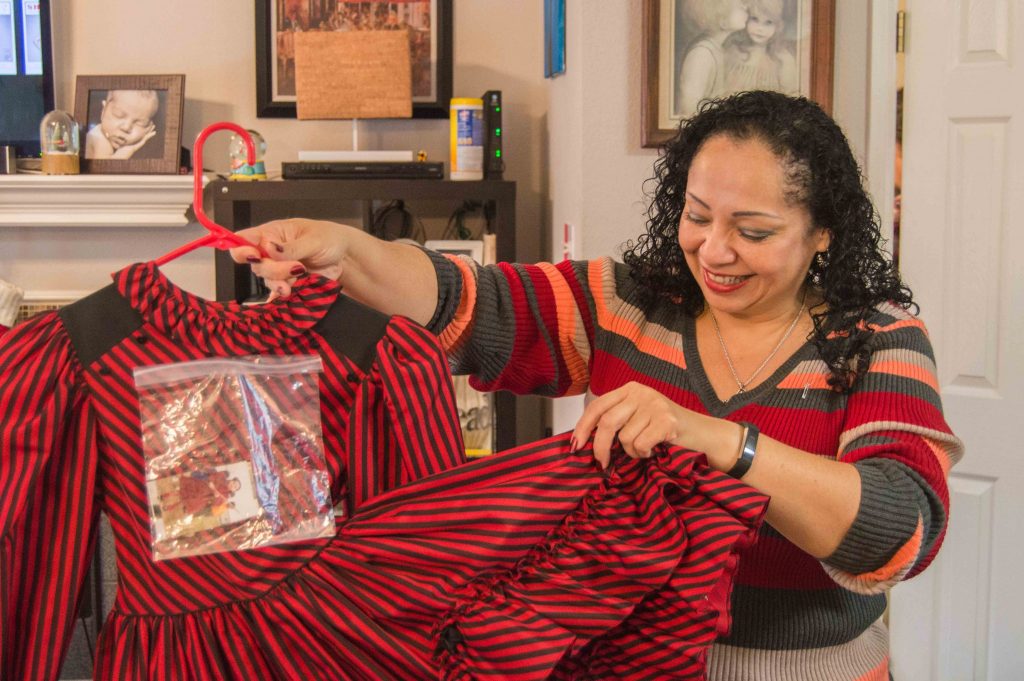 It’s hard to underestimate the power of tamales in making family members closer and shaping traditions, especially when I see Christina showing off a cute red dress she bought for little Adriana with her first hard-earned money or when Adriana and her husband have an argument about wrapping tamales which unexpectedly ended with:

– Your tamales are gorgeous!

As we sat on the couch chatting, munching on Gamesa cookies – another bow to the Mexican food filled day – and waiting for tamales to steam, I couldn’t think of a better way to describe tamales than little pouches of happiness. 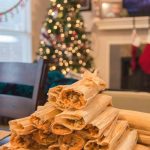 For beans and cheese tamales filling:

Preparation on the night before:

Purchasing the items for tamales is difficult and depends on availability. Living in Texas makes shopping for these ingredients a little easier but even then I had to go to Fiesta, a grocery store in Austin known for carrying food items typically found and sold in Mexico or border towns. This recipe will make 5 to 7 dozen tamales. 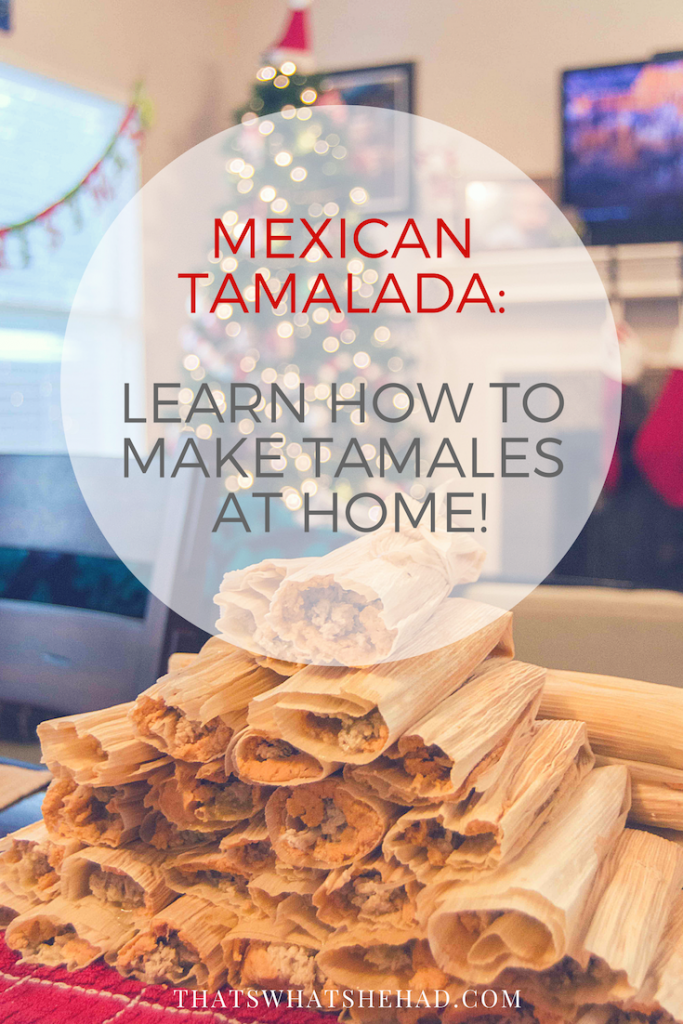 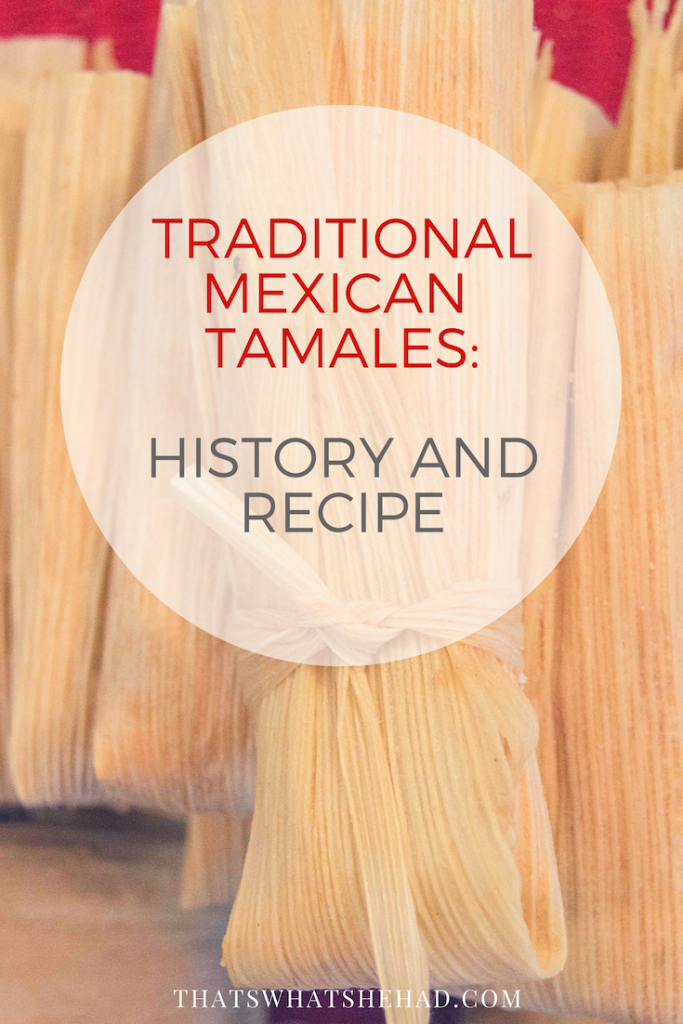 Austin Christmas Texas The time I...
Leave a comment
11602