For the Love of Hot Brazilian Actors

Sometimes I don’t feel like writing about food or travel. Sometimes I feel like writing about hot Brazilian actors. It is half past midnight and maybe, just maybe, I am not in my right mind. I have to also admit that for the past few hours I was watching a Brazilian novella — which is a pretty Portuguese word for soap opera — and that is another reason to believe I am not entirely adequate. There’s a chance that I will wake up tomorrow and feel as embarrassed as a person who drank too much and called his ex twelve times. Only I am drunk on love and passion of Brazilian soap operas.

Can you blame me?

His name is Cauã Reymond which I dare not pronounce because of the nasal ã. Nasal vowels in Portuguese have always been a source of trouble for me. They don’t exist in English or Russian, so saying them out loud always feels wrong and funny, like if I was making something up. Additionally, the difference between “a” and nasal “ã” can have an enormous impact on the meaning of the word.

Nasal ã is the difference between bread and… ahem… that part of Cauã Reymond that is unfortunately covered on the photo above. Ask for pão in a Brazilian padaria, and you’ll get yourself a nice hot loaf of bread. Ask for pao, and… well you still might get something hot and nice. I can still remember how much effort every trip to a bakery required when I lived in Brazil.

But enough about bread, as I mentioned above, today I don’t feel like writing about food. Instead, let’s talk about obsessions. I had obsessions with movie stars since I was a kid. My first love was Leonardo DiCaprio. I was twelve. Titanic had just been released on VCR tapes in Russia. Don’t start counting my age now! You’ll miss by a few years since all the cool American stuff comes to Russia with a few years delay.

I borrowed the tape from a classmate, the only problem was I didn’t have a VCR. I had to hold on to the tape for a week until my parents and I went to visit my aunt, the lucky owner of a VCR player. Then there were three unforgettable hours of crying, embarrassment (that handprint on the car window!), hope, and… no, oh no! Leo, what have you done?

Immediately after returning the tape, my room started filling up with Leo posters, Leo stickers, a Leo biography, and my mind — with pretty crazy ideas of how I was going to meet him and make him fall in love with me. I imagined how his plane crashed while he was flying to Hollywood by way of my tiny Russian city in Ural Mountains. He would survive, of course, and I, as the only English-speaker in the city (which is the only part of this story that is not entirely crazy), would nurse him back to life. I was twelve, ok?

When I grew up and moved on to high school and then University, obsessions did not disappear, but my interests have diverted to a different type of men than young and sweet Leo DiCaprio. There was a Colin Farrell stage, a Gerard Butler stage, and a Jon Hamm stage after watching Mad Men, obviously. As one of my friends noticed, “Yulia doesn’t fall for a guy who doesn’t look like an old white dad”. What can I say? Only that my husband is a very youthful looking brown guy. I have no explanation as to how my brain functions when it comes to amorous affairs.

If you think that every girl at some point in life was enamored by a Hollywood superstar, you don’t take the gravity of my situation seriously. In Russia, we have our own version of Facebook. In my profile, I had an album called “For Girls Only”, dedicated to the men I found handsome: mostly celebrities, mostly half naked. The comments my girlfriends and myself left under those pictures at the age of nineteen make me blush with embarrassment ten years later. Ok, now you know my age.

The album featured photos of the men I mentioned above as well as Hugh Laurie (oh God! That white dad thing is real!), Jared Leto, Marlon Brando (I am actually proud of myself for including him in the album), and Hrithik Roshan (whaaaat?! I can not, for the life of me, remember adding a Bollywood actor’s picture).

My best friend, knowing about my special feelings for Gerard Butler, presented me with the masterpiece below on the 8th of March, the International Women’s Day. Have your friends ever done something like this for you? That’s what I thought. 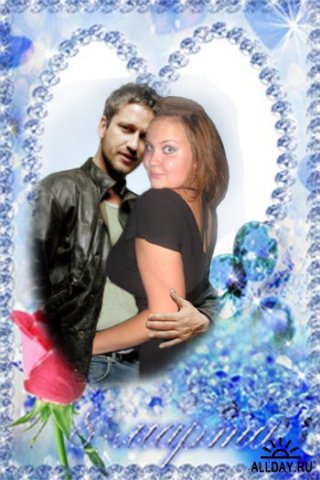 I am approaching thirty, I am a married woman, and one would have thought my obsessions should be at bay now. It is true to a certain extent. They are shorter and further apart than when I was twenty, falling in love with one celebrity after another.

Yet, I still find myself watching five episodes of Avenida Brasil in a row, waiting for Jorginho to kiss Nina at the tunes of my beloved “Depois” by Marisa Monte. Even worse, I google images of Cauã Reymond afterwords and think that a laminated list of celebrities you are allowed to hook up with that Ross made in Friends is not such a crazy idea. Am I really turning thirty this year?

I should grow up, stop looking at the world through pink glasses, and not expect a movie superhero to magically appear in my life. After all, what’s going to happen when I meet Gerard Butler, Colin Farrell, or Cauã Reymond? Mumble that I appreciate their contribution to the world cinematography, and it’s really nice to meet them and all, but I actually love my husband?

I should be more reasonable and realistic in my vision of the world and my role in it. I don’t expect Leo’s plane to fly over my hometown in Russia anymore… But it is not entirely impossible that I might run into him at a coffee shop while on vacation in LA, is it?