The Time I Moved to Germany During Oktoberfest

Technically, I moved to Germany three days before Oktoberfest, but that would make for an unnecessarily long and overall less cool title. Still, pretty good timing, especially considering that Oktoberfest has never been on my bucket list. First of all, I don’t like beer. Actually, that alone is reason enough to not visit the biggest beer festival in the world that attracts over 7 million people. 7 million people is, by the way, another reason why Oktoberfest wasn’t on my radar — I am not fond of crowded spaces. 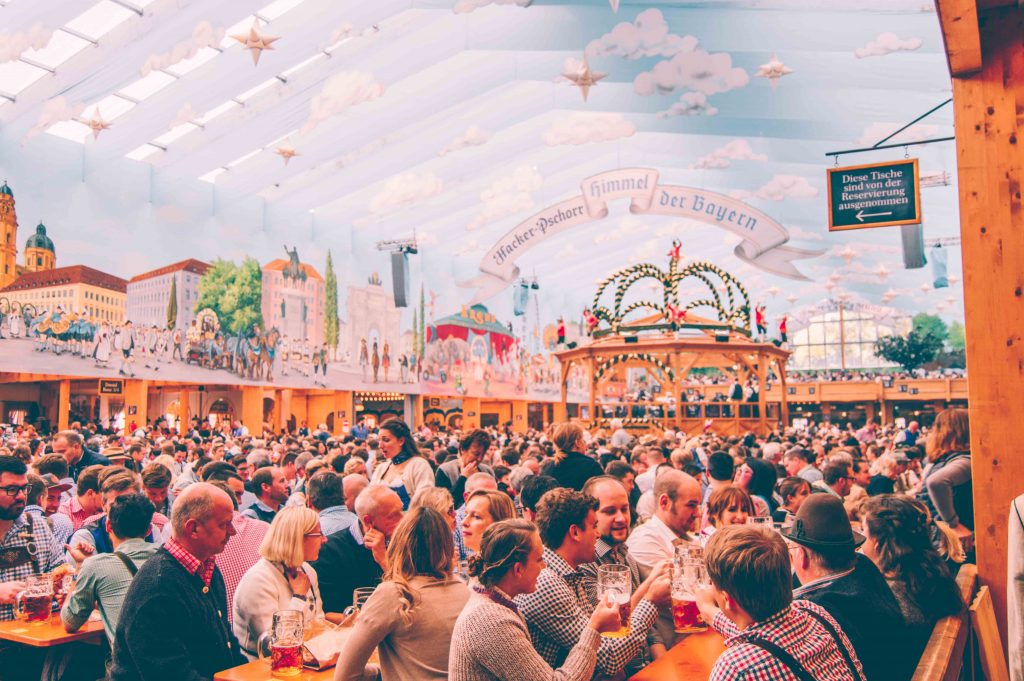 Had it not been for my family visiting Munich and eager to experience Oktoberfest, I might have skipped it altogether. You see, when one moves to a new country half way across the globe, generally the first few days are reserved for unpacking, settling, and being shocked, not for standing in lines at six in the morning, drinking beer with thousands of people and stuffing one’s face with all things pork and potato.

A week ago I knew that Oktoberfest is a German beer festival. That is it. I had too much on my mind with the move to do any research on how to visit the largest folk festival in the world and how to navigate the 420,000 square meters ground. I left the planning to my family and went in with absolutely no expectations. Oktoberfest turned out to be a lot of fun even for a girl who wouldn’t drink beer to save her life. 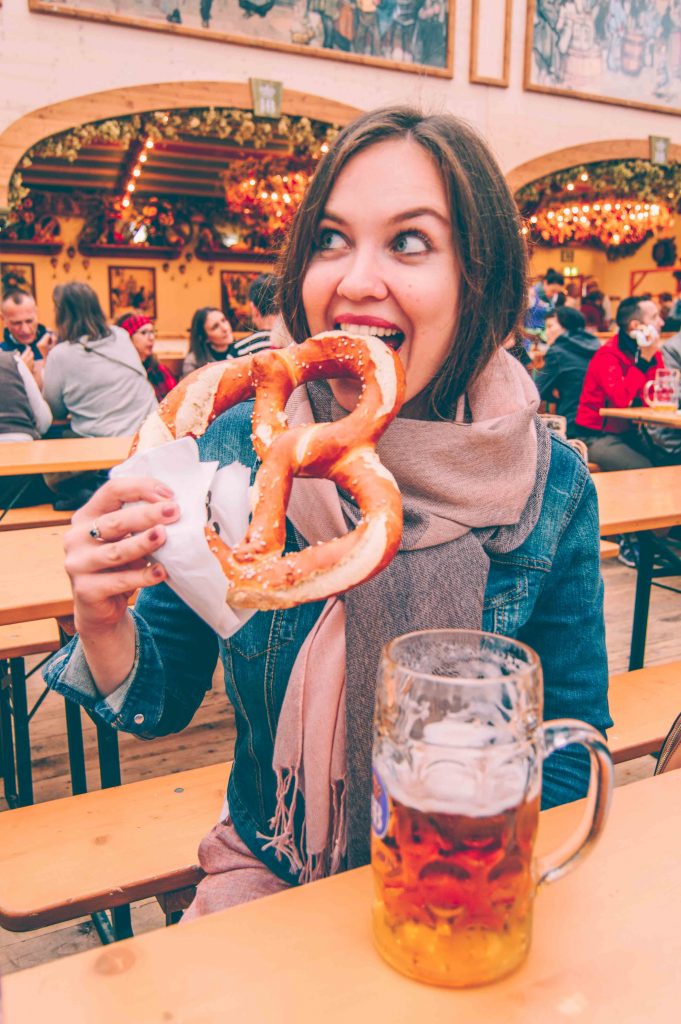 The start, though, wasn’t as wonderful as one might imagine. On the first day of Oktoberfest — which any local will strongly recommend you to skip and for a good reason — I woke up at 5 am to get to Theresienwiese (Theresa’s Meadow), the ground where the celebrations are held.

The ground was named after Princess Therese of Saxony-Hildburghausen whose marriage to Crown Prince Ludwig of Bavaria was the whole reason for the first ever Oktoberfest in 1810. The celebration of the royal wedding which included horse racing around the meadow, parades, and drinking beer attracted so many Bavarians that it was decided to make it an annual tradition. Since the start, Oktoberfest was not celebrated only 24 times, usually during the times of war.

So here I was, standing in line of other crazies who made it their life goal to visit Oktoberfest on the first day and therefore gathered outside Theresienwiese at 6.30 am on Saturday morning. The people in line were fully prepared to spend two and a half hours waiting for the gates to open, which means they brought beer. That’s right, people bring their own beer to a beer festival to start drinking before sunrise which, actually, isn’t a bad idea since a glass of beer at the grounds will cost you 10-12 euros. I opted for coffee and was overall happy if not for the fact that I lost my  designer sunglasses on the way from metro station. 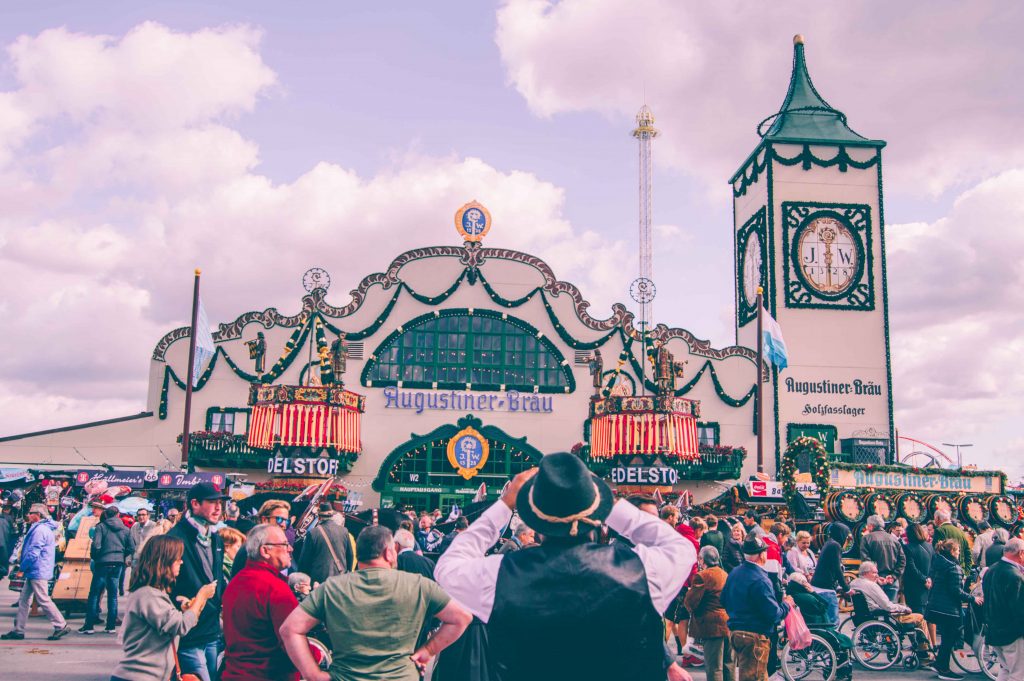 Oktoberfest has a notoriety for collecting over 4000 lost items yearly. Great efforts are made to return the items to their owners, but the ones that were not retrieved within six months are sold at the public auction. Over the years, items lost at Oktoberfest included a clown suit, French horns, a riding whip, a set of dentures, a signed Playboy magazine, and an electric chair, to name a few. So my glasses were, really, very mundane.

At fifteen to nine, an organized double file line started transforming into a crowded mess of people pushing each other from all sides in anticipation of the opening. I was making tiny steps on my tiptoes, trying to hold on to my husband’s hand and not lose each in the crowd when I heard him exclaim: “Hey! Is that guy wearing your sunglasses?”

I turned around to look and sure enough there was a happy bürger dancing with a bottle of beer in hand, wearing my glasses. What the what! as Liz Lemon would say! I pushed my way through the crowd: “Excuse me! I am sorry! Excuse me! I am sorry!” Tap-tap on the guy’s shoulder: “Hi! These are my sunglasses!” “I found them in the street. Did you drop them?” “Yes!!!” Both him and I, as well as the people around, were in complete shock and after a second of silence started laughing hysterically. I made my way back through the crowd, holding on to my miraculously recovered sunnies just in time for the gate opening. 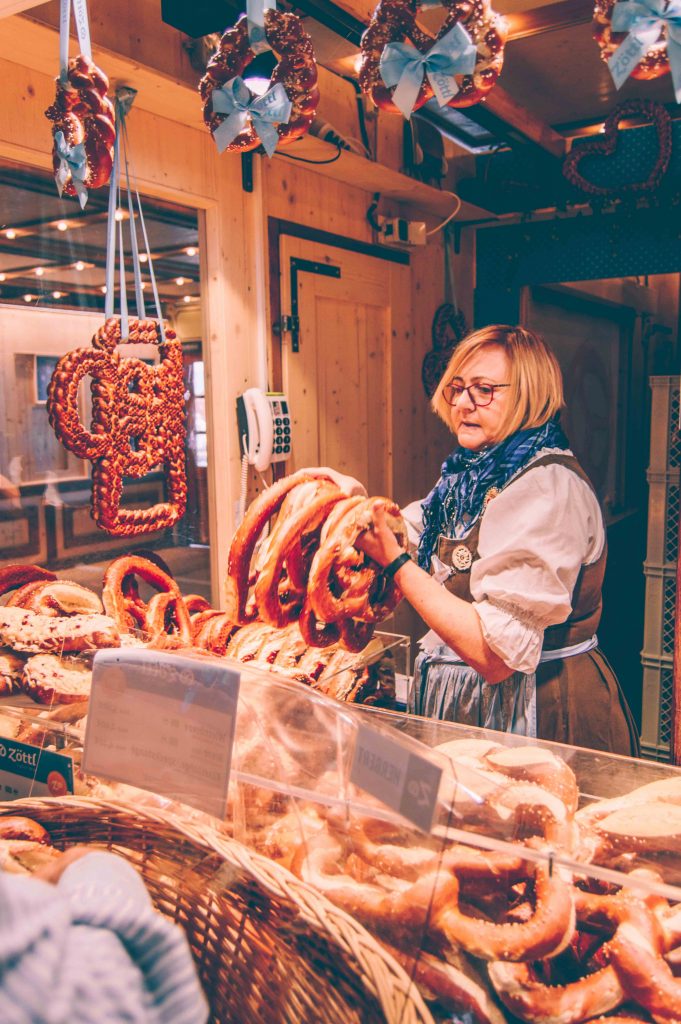 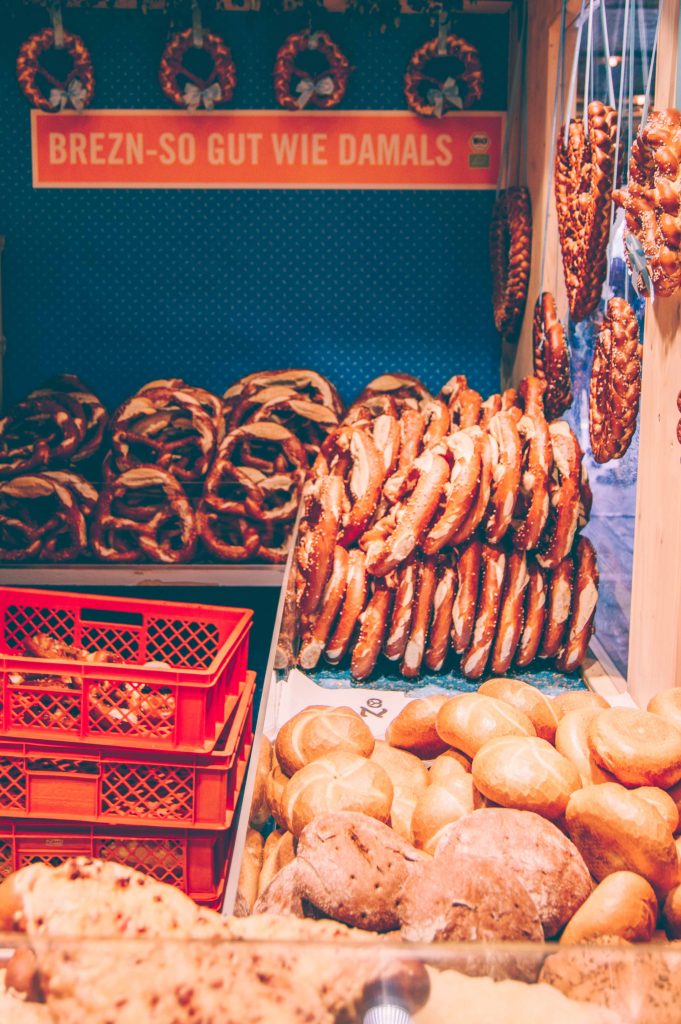 What I expected to happen: people would be searched at the entrance, then walk into the grounds and find their way into tents. What really happened: a stampede. Bumping into each other, slipping after a night rain, and falling face first on the ground, people ran inside as if their life depended on it. I blindly followed my sister-in-law and her boyfriend who, I hoped, had a plan.

The plan was to get into Schottenhamel tent where the opening ceremony traditionally happens and find a table. We did get into the most popular tent at Oktoberfest, finding a table was impossible, though. Within 10 minutes the tent which has a seating capacity of 10 000 people was full and the doors closed. Now we had to wait another three hours for the opening ceremony that starts at midday.

Every year, at exactly 12 pm on the first day of Oktoberfest, the mayor of Munich taps the first beer barrel with an exclamation “O’zapft is!” (“It’s tapped!”), and thus the festival is declared open. Twelve gunshots are fired immediately after on the stairway of Ruhmeshalle as a signal for other tents to start serving beer. 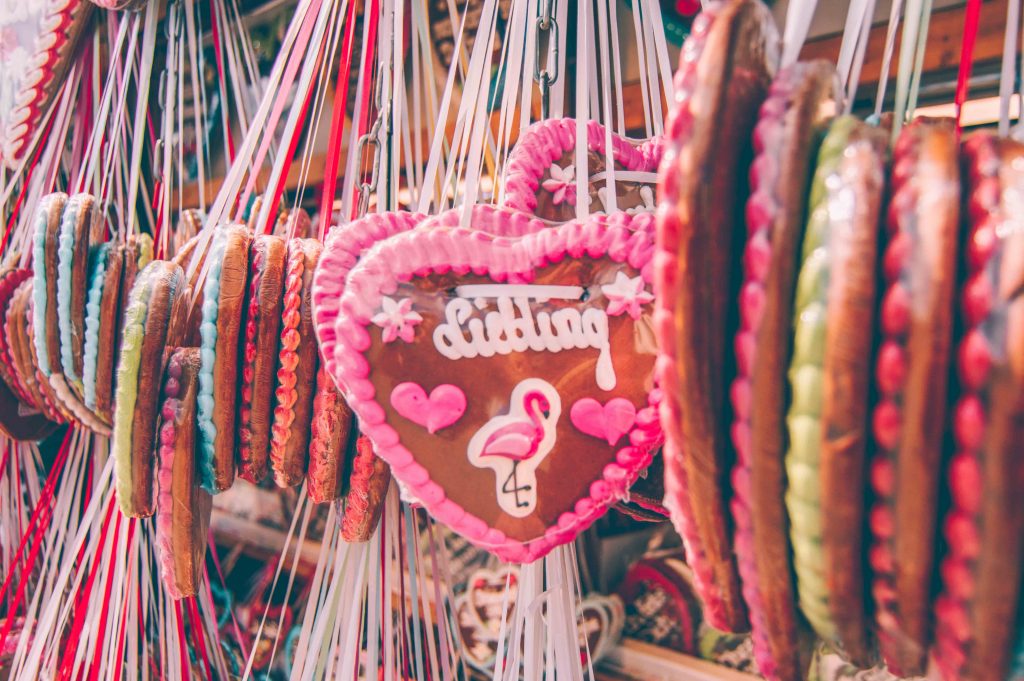 The three hours between getting inside the tent and the opening ceremony were spent standing in extremely uncomfortable positions, leaning against fences and envying the lucky people seating at the tables and eating sausages. Funny little detail: you can only order food and drinks if you have a table. If you don’t, you have to make do with pretzels that are rather good, but cost an arm and a leg, and gingerbread cookies that cost even more, but are completely inedible.

By half past eleven our patience was wearing down when the second craziest story after finding my sunglasses happened — we met one of the creators of @beautifuldestinations, probably, the most popular travel account in Instagram with over 10 million followers. Tom Jauncey was standing next to us, casually recording a story for his Instagram. A really nice and friendly guy he turned out to be after I had to be dragged by my husband to say hi to him.

After the opening ceremony — which was happening barely 10 meters away from us and which we still had to watch on the screen because of the thick crowd — we were finally free to explore the grounds and find a table in another, less popular tent. Ha! Easier said than done.

That is why any local will advice you against visiting Oktoberfest on the first day — finding a table is practically impossible. It took us one and a half hours of circling around, using an ash can as a make-believe table, and keeping an eye on a couple that was half way through their meal to reach their table before anyone else in the vicinity could and secure it for ourselves. Once I sat down I swear I’d hiss at anyone who dared approaching and asking if there was a seat available. 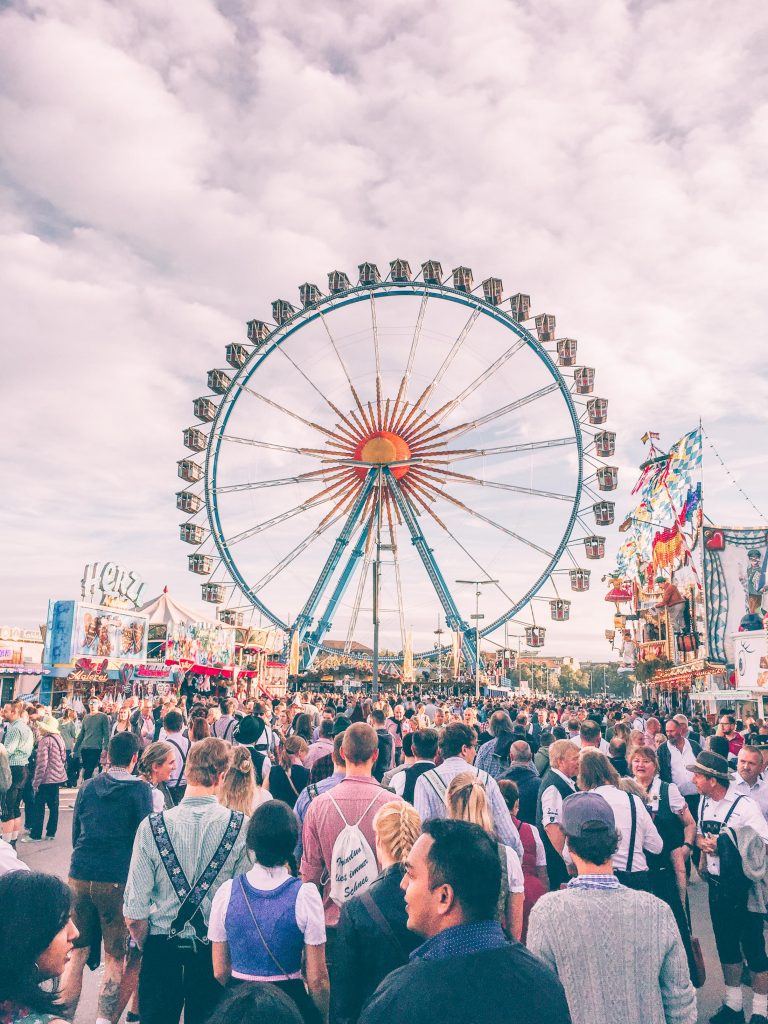 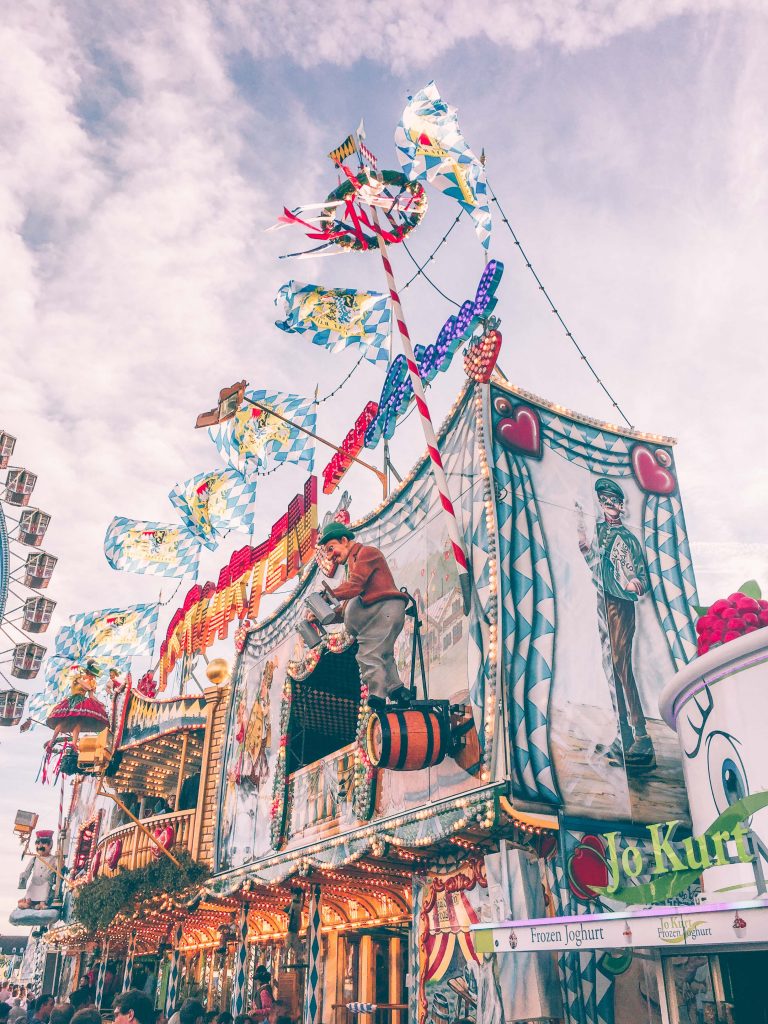 Once you have a table, the fun begins. There’s beer that comes in one-liter-glasses (ein Maß), there’s all the potato and sausage you can eat, there’s singing and cheering with strangers, there’s watching Bavarians stand up on a bench and drink a whole liter of beer in one go with five thousand people cheering them on. Mind you, if the poor thing can’t finish one liter, the same five thousand people mercilessly boo them. So don’t even try this feat if you are not sure you can follow through on the commitment. 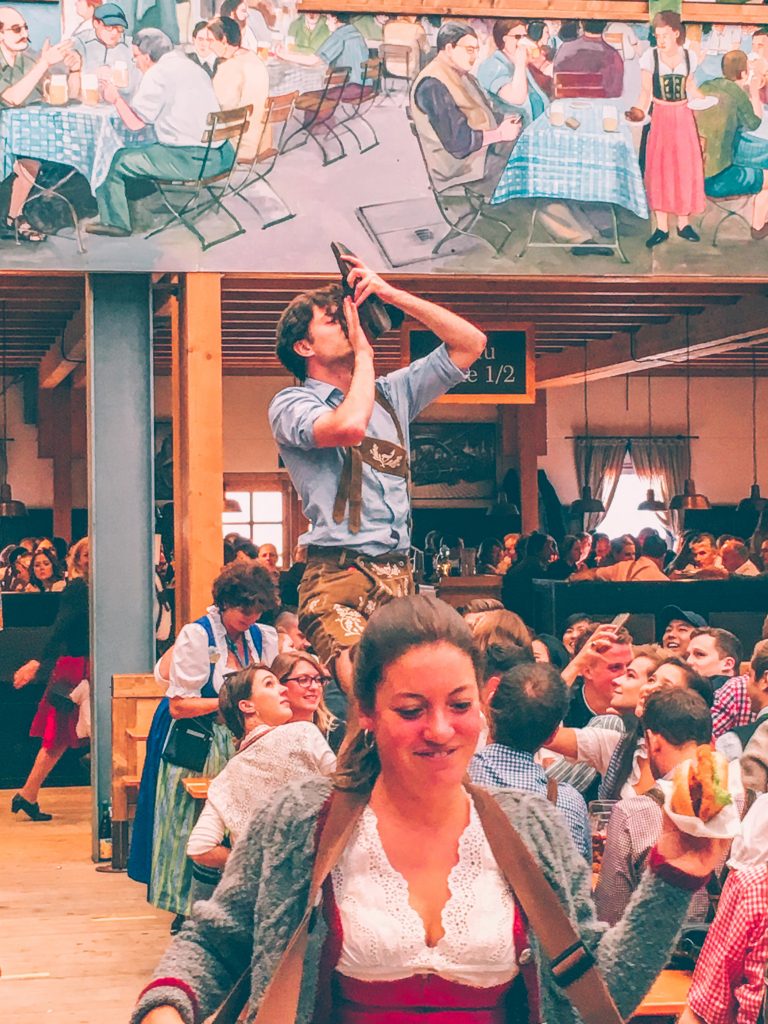 This guy drank a liter of beer from his own shoe! Germans are a crazy bunch!

I personally watched a guy drink a liter of beer from his own shoe which was equal parts impressive and disgusting. No, actually 65% disgusting and 35% impressive, especially after our German Airbnb host confessed that it’s not a thing. There’s also some ritual of inhaling white powder through the nose which looks extremely like doing cocaine, but everyone assured me that it was an innocent mix of sugar and menthol. Yea, right.

The three things I found most impressive at Oktoberfest are food, toilets, and safety. Being used to mediocre (at best) food at American festivals, I was pleasantly surprised by the quality of German Bratwurst (sausage), Breze (pretzel), and Hendl (roast chicken). The toilets were sparkling clean and always had toilet paper which given the 6 million visitors was pretty unbelievable. And lastly, for a festival with the largest consumption of beer in the world — 7 million liters of beer consumed within 16 days, to be precise — there were almost no occasions of rowdy behavior. Oktoberfest is surprisingly family-friendly and safe. 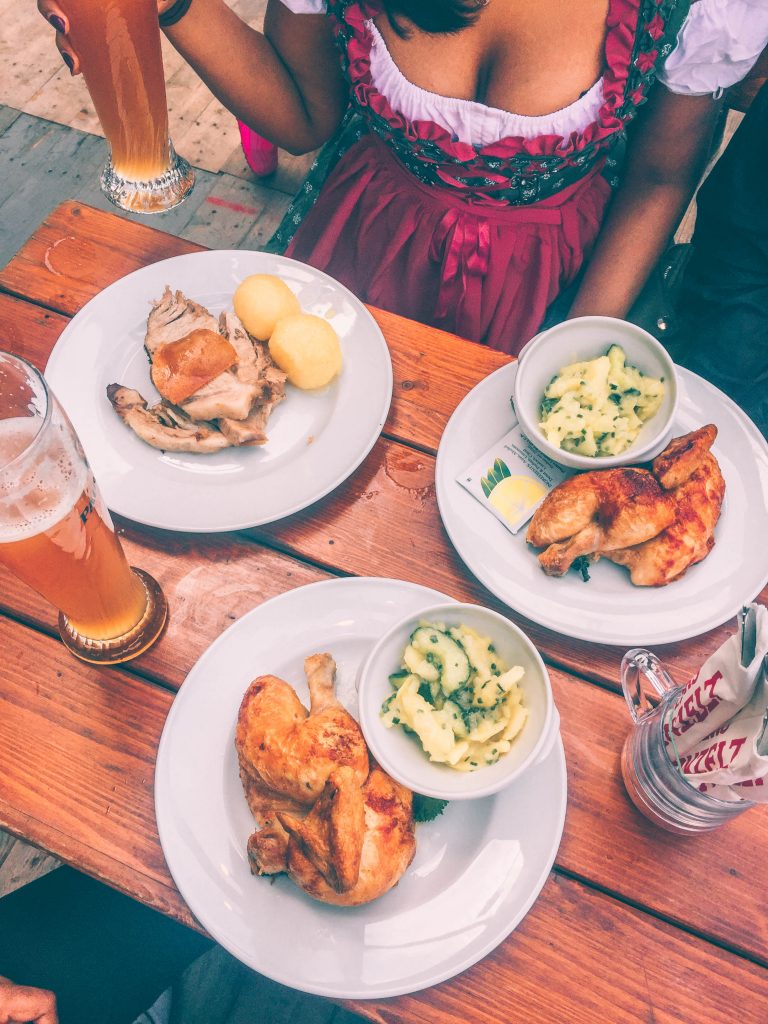 My favorite shot from Oktoberfest: half roast chicken, beer, and my friend in a traditional dirndl.

It is also a decidedly local celebration with 70% of people being from the region of Bavaria and 15% from other parts of Germany. Unlike what you might imagine, tourists are few and far between.

Thanks to Oktoberfest, instead of slowly and gradually submerging into German life and culture I did a cannonball and found myself right in the middle of Bavarians wearing dirndls and lederhosen, drinking beer from one-liter-glasses (and, occasionally, shoes) and singing “Ein Prosit der Gemütlichkeit”.

I know that “Cheers!” is “Prost!”, that if a dirndl apron is tied on the left — the girl is single, and if on the right — she’s taken, I even know that if you hate beer, you can still come to Oktoberfest and enjoy Radler which is a mix of beer and lemonade that tastes surprisingly good. That is more than most people know after a week of immigrating to Germany. I think I’ll do fine here.