‘Don’t mess with Texas’ and ‘You can all go to hell, and I’m going to Texas’ are just a few sayings that tell you how bad-ass this state is. The name alone will most likely revive images of cowboys riding horses and spacious ranches in your mind.

So, when it comes to choosing the state’s official dessert, it’s obviously not going to be a vanilla cupcake with a pretty swirl on top or a chewy chocolate cookie. It is going to be a hearty pecan pie, a combination of rich buttery dough, an intense burst of nutty flavor and a tad of caramel sweetness. To take the scale of ‘masculinity’ up a notch, you might consider adding dark chocolate or (what the heck) even bourbon to it! 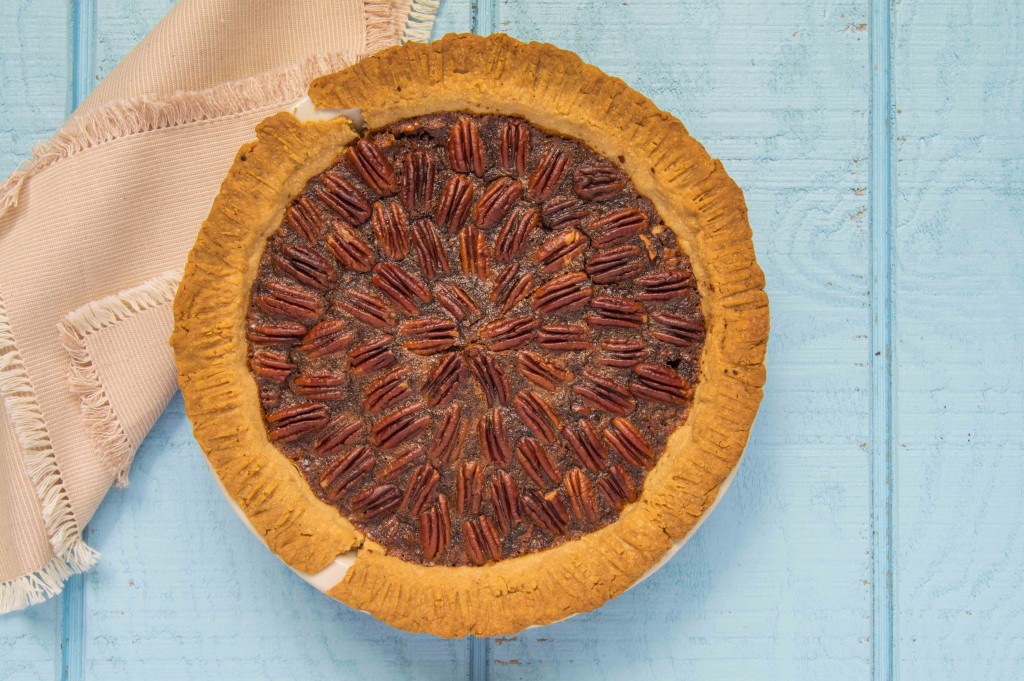 The phrase ‘official state dessert’ (first uncovered when I tried the Boston cream pie – the official dessert of Massachusetts) is actually something which surprised me. Not every state has one, but when it does, I make it my mission to seek out the best version of it and happily devour it. The search for the perfect pecan pie turned out to be quite an adventure: I would Google ‘the best pecan pie in Texas’ and drive half an hour to the outskirts of the city just to realize at the first bite that the dough is too soggy or the filling is too mushy and jelly-like.

As it always happens, the perfect slice was under my nose all along. A local coffee shop, a mere five minutes’ walk away from my house, serves the most exquisite version I’ve tried so far. 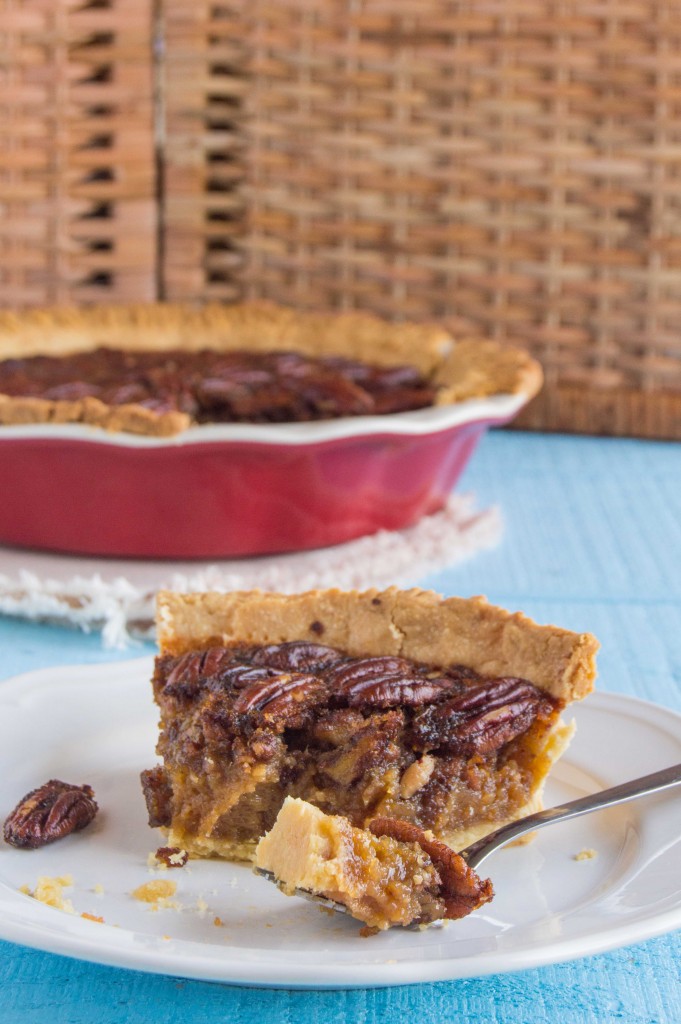 What makes a great pecan pie? First things first, the pastry, of course. Although many recipes call for pre-made pie crust that you can get in a supermarket, it’s essential to prepare dough from scratch. You can then ensure that the crust comes out crunchy and crumbly to oppose the filling’s gooeyness. I also prefer the dough to be on the savory side, even with a kick of saltiness, to contrast the sweetness of nutty mixture.

Next is the filling. Some recipes suggest using chopped pecans, others – use them whole, but the majority goes for a combination of the two. Chopped nuts provide the crucial nutty flavor in each bite, while whole pecans will make a pretty pie, worthy of your Instagram profile!

Traditionally, corn syrup is used to sweeten the mixture, and not just any, but a brand named Karo. The company claims that in 1930-s the wife of a corporate sales executive mixed up Karo corn syrup with sugar, eggs, vanilla and pecans and baked it in a pie shell, thus producing the first pecan pie as we know it today. Nearly all classic American recipes call for Karo syrup.

Before 1930-s the pie was, probably, made with honey, maple syrup, or molasses. You would expect the history of pecan pie to go way back into the past, but the truth is, no written recipe was found before the year of 1886. Jean Anderson in her The American Century Cookbook says:

“In fact, I could find no cookbooks printing pecan pie recipes before the early twentieth century… in At Home, on the Road, in History (1987), for me the definitive work on the evolution of Southern cooking, John Egerton writes: “We have heard the claim that Louisianans were eating pecan candies before 1800, and with the sugar and syrup produced from cane at that time, it is conceivable that they were eating pecan pies, too, but there are no recipes or other bits of evidence to prove it.”

Origins of this pie are rather murky. Some suggest that German settlers might have been recreating nusstorte – traditional caramelized nut-filled pastry – in the Lone Star state. Others claim that pecan pie is, most likely, a descendant of lemon cheese pie, a recipe which English colonists brought with them to the New World. Yet another version states that we owe credit to French settlers in New Orleans, who discovered the pecan nut from the Native Americans. Whatever the case may be, it is safe to say that Karo, though it wasn’t the inventor of pecan pie, definitely, helped to popularize it across the country. 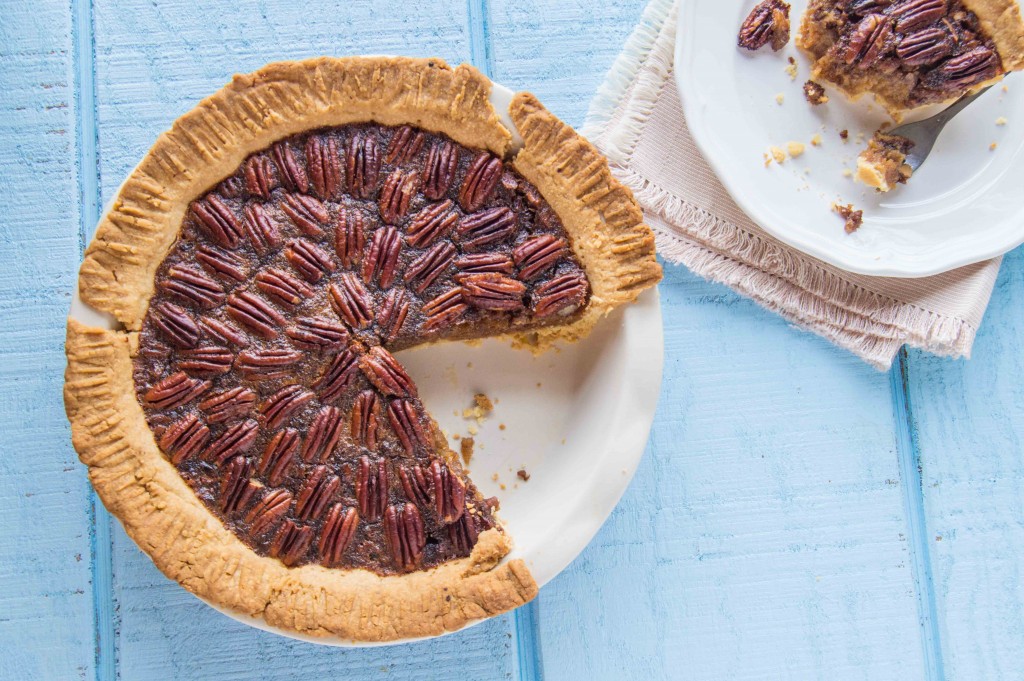 Not only are the origins of the state’s official dessert contentious, but its pronunciation, too, is debatable. Say it out loud now. Did you pronounce it pee-KAHN or PEE-can or, maybe, PEE-kahn?

Research conducted by a doctoral student studying statistics at NC State University shows that pee-KAHN is dominant in the USA, but in the states of Texas, Oklahoma, Louisiana and Mississippi, pick-AHN prevails. PEE-can is popular on the East Coast and in New England, while people from Wisconsin, northern Minnesota and Michigan’s Upper Peninsula go with PEE-kahn.

These differences I experienced first-hand when, after moving to Texas from New England, I asked for a PEE-can pie in the café, and the waitress asked back, “pick-AHN pie?” as if to correct me. What does it matter which pronunciation you choose, when we can simply agree to call it a slice of heaven!

For years the pecan pie has been a Thanksgiving staple, but over time it has outgrown this status turning into a popular everyday treat. Wouldn’t it be sad to have this scrumptious dessert just once per year? Thankfully, nearly every café and restaurant in Texas nowadays has it on the menu.