Waiting in Line to Franklin BBQ: Is It Worth It?

“If one hypothetical Russian lady who loves Texas very much decided she wants to be as Texan as possible, what would she have to do?” I asked my readers and, boy, did they come back to me with some creative answers! From horseback riding to dancing two step to surviving the famous Franklin BBQ line! I made a comprehensive list and set out to do everything I possible can! 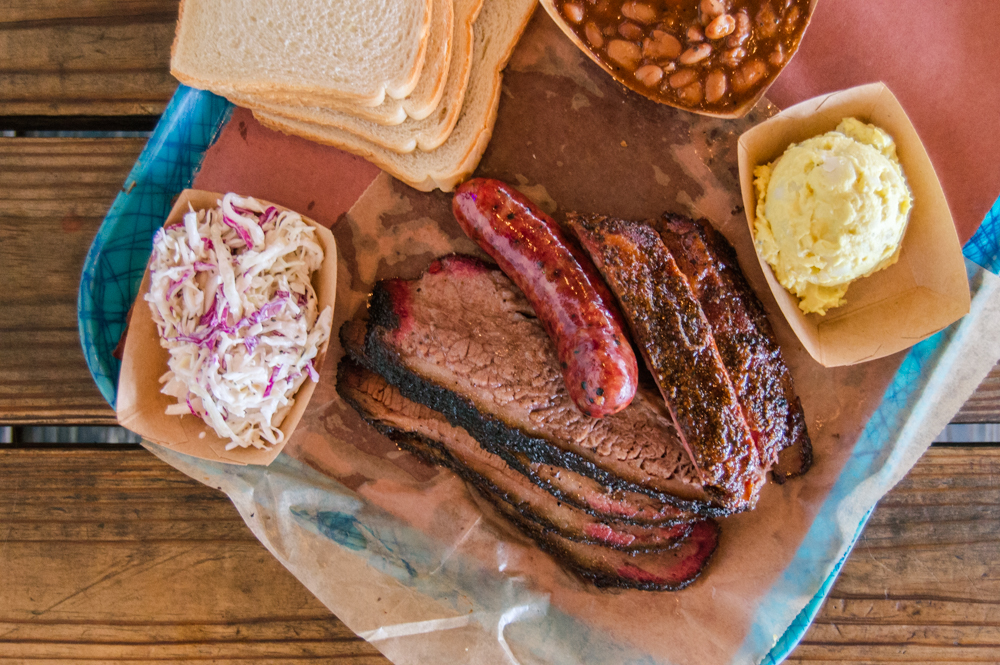 This is the first post in my series “Becoming Texan” and the first challenge I completed – waiting in Franklin BBQ line and getting fatty brisket! If you are not from Texas, I should probably mention that eating BBQ in this joint is indeed a challenge. You don’t just walk into Franklin and order half a pound of brisket. You get up at 6 am in the morning, arrive to the restaurant 4 hours before its opening, and patiently wait.

What You Should Know about Franklin BBQ Line

Now before you say: “4 hours? What the hell! I would never!” here are a few facts you should know about Franklin BBQ and why it’s so famous. 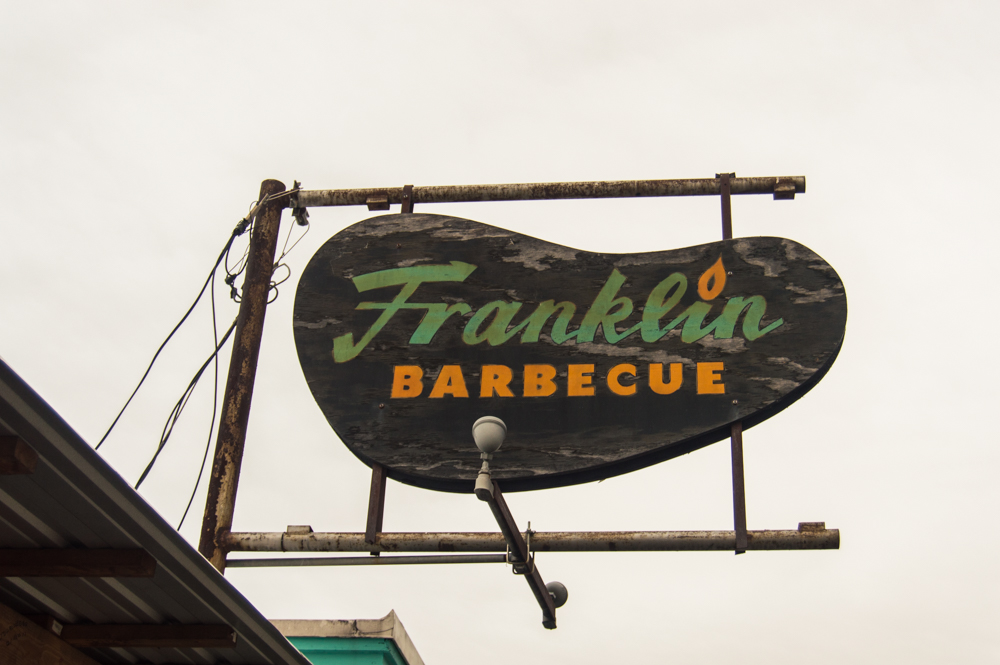 How It All Started

Aaron Franklin opened a food trailer back in 2009 in a vacant lot behind his friend’s coffee roastery. His following grew so fast that in less than a year it could be compared to some of the oldest BBQ joints in Texas. He quickly outgrew his trailer and moved to a permanent location in East Austin. The lines, not surprisingly, followed.

The restaurant is open from 11 am until sold out which usually happens around lunch time. If you come here by noon, you are too late. Sometimes the sign “Sold Out” goes up before the restaurant even opens indicating there are so many people in line, by the time you reach the front there will be no meat.

The Secret Behind Franklin Barbecue

In an interview to Bon Appetit magazine Aaron Franklin revealed some of his secrets,

“First of all, he uses Meyer Angus beef, which is humanely raised in Montana without hormones or antibiotics. The fires in his pits are started using only post oak wood and butcher paper drenched in the tallow that covered the previous day’s brisket.

Franklin swears he uses only salt and pepper to season it [brisket] … he promises it’s all about time and the temperature of the pits. Whereas most places smoke brisket for seven hours at a blazing 500°, Franklin cooks his for about 18 hours at 250° to 270°. It goes into the pits around 9:00 a.m. and won’t come off until about 3:00 a.m. the next day.”

How I Stayed in Franklin BBQ Line for 4 Hours

Rough awakening after sleeping for only 3 hours. I had an article deadline the day before and stayed up to finish writing.

Arriving to Franklin BBQ only to find about 20 people already waiting in line. Nevertheless, we were technically in the start of the line which was heartwarming. 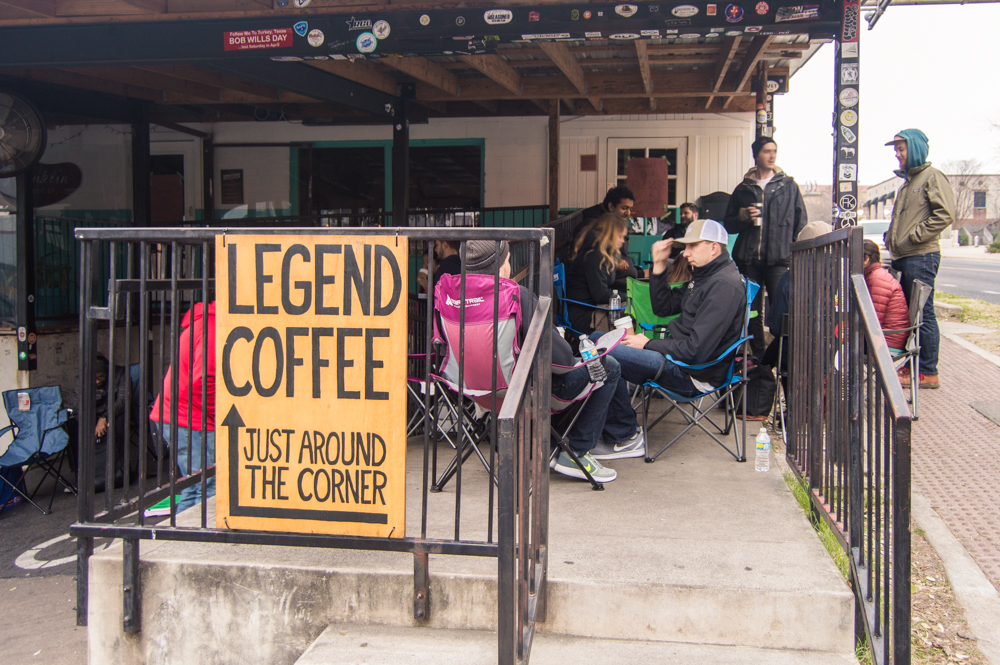 Arranging a little home away from home for the next 4 hours. Getting comfy in the chairs with legs wrapped in blankets, because the temperature was in low 40-s. 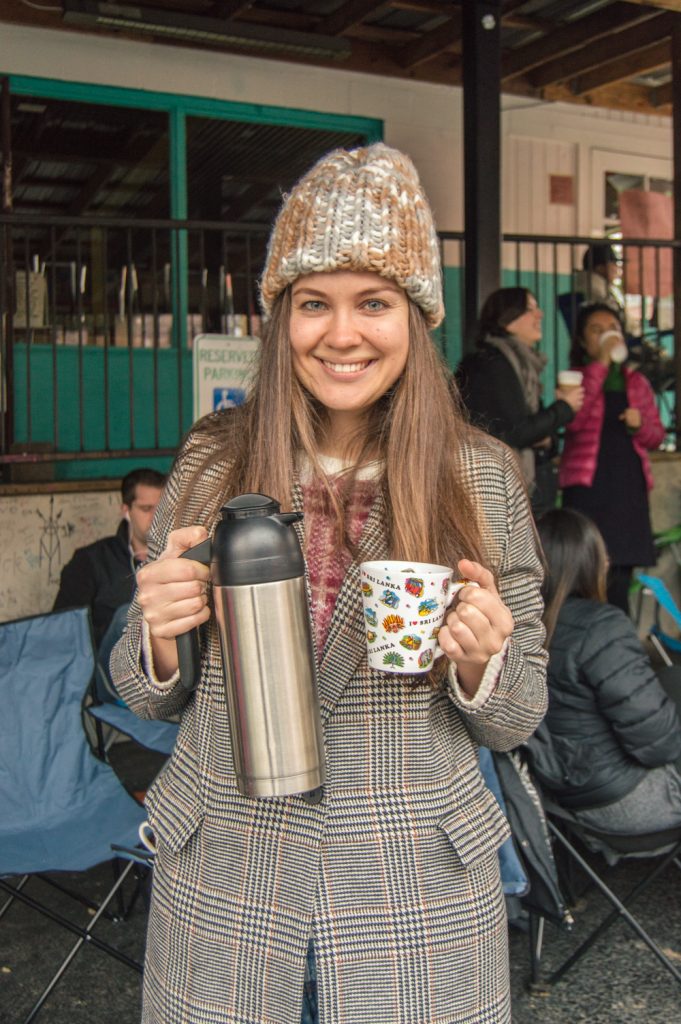 Having many cups of coffee, reading 100 pages of a book, chatting with people around who were as crazy as I was to camp out for hours in order to get a slice of brisket. 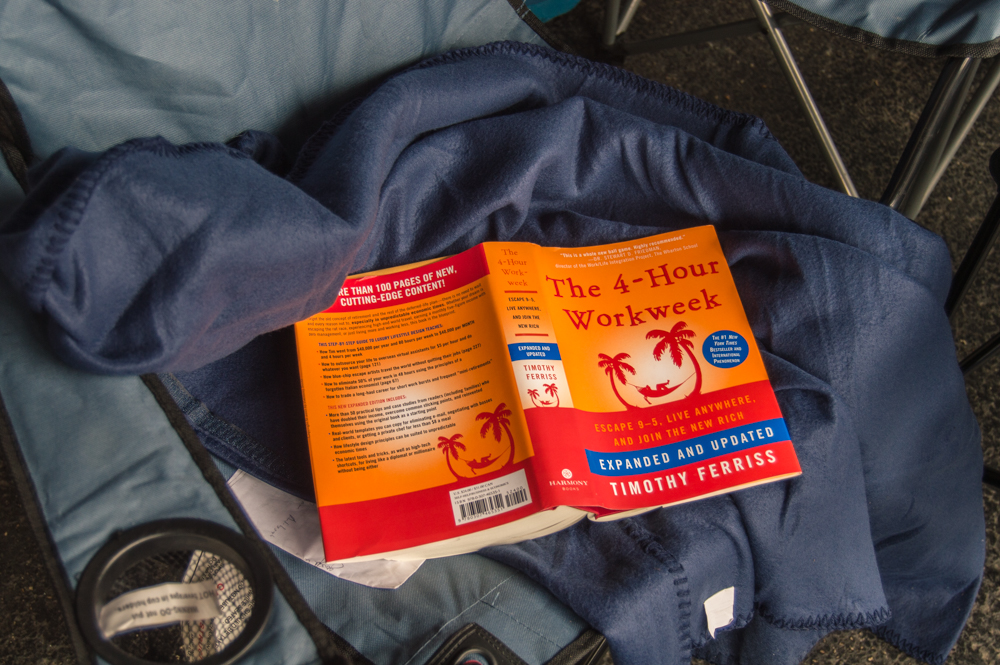 By this time, the line went along the wall of the building. 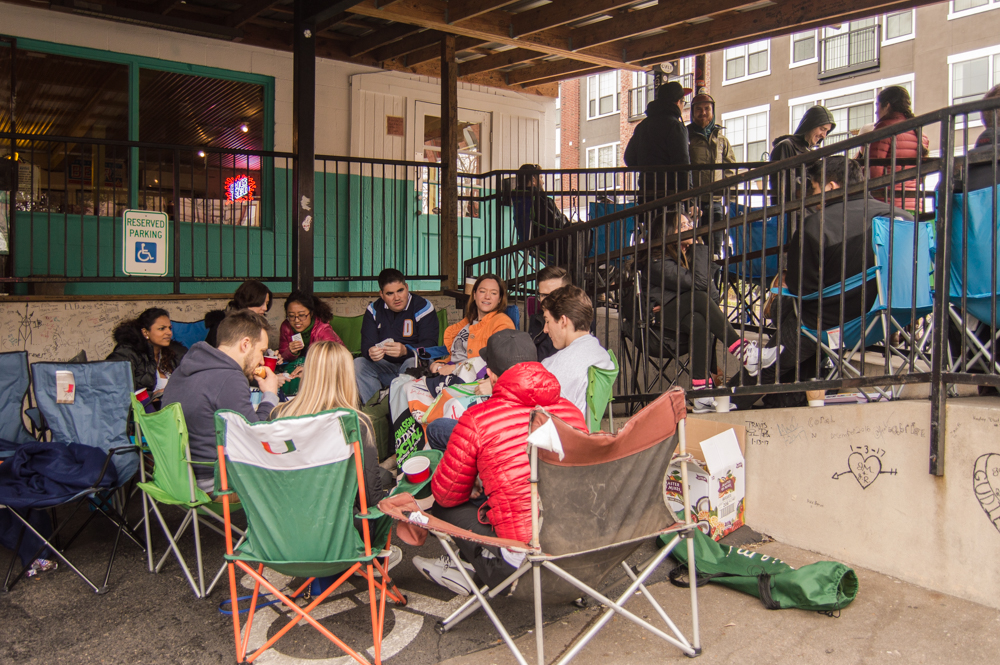 An employee of Franklin BBQ came out to welcome everybody and make a count of meats people are planning to order. The line went all the way to the parking lot. 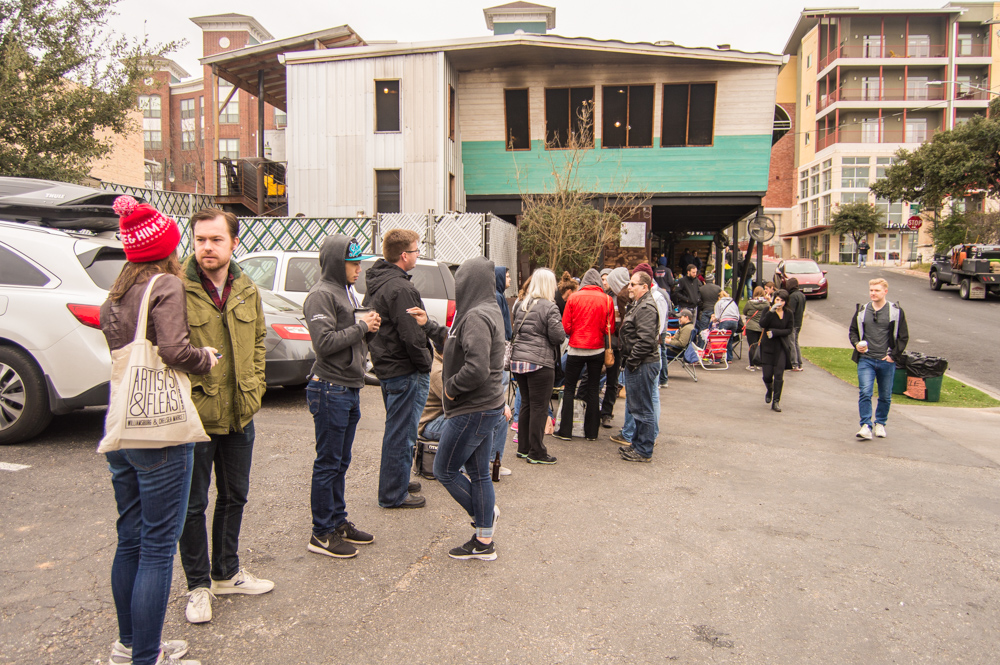 The doors opened and we finally got inside. 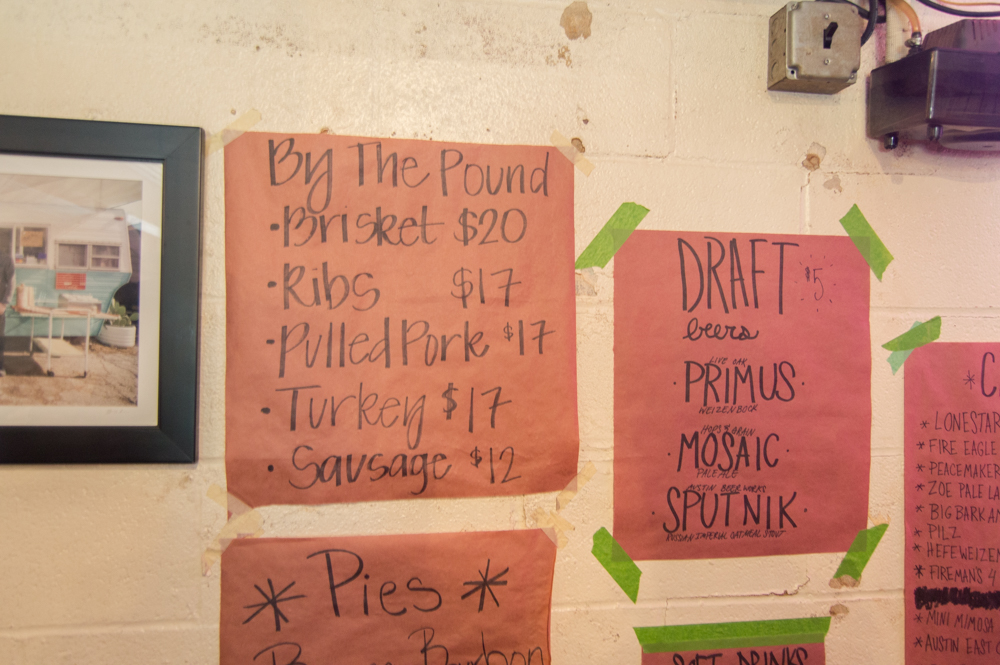 Meeting Aaron Franklin himself made me feel like I‘d just talked to a rock star! 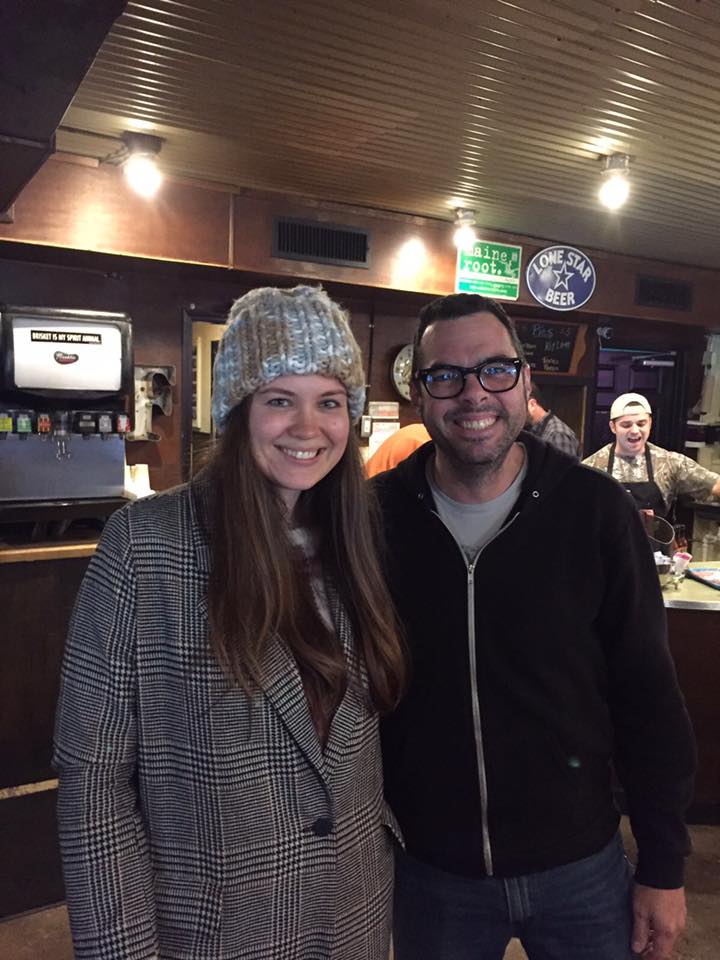 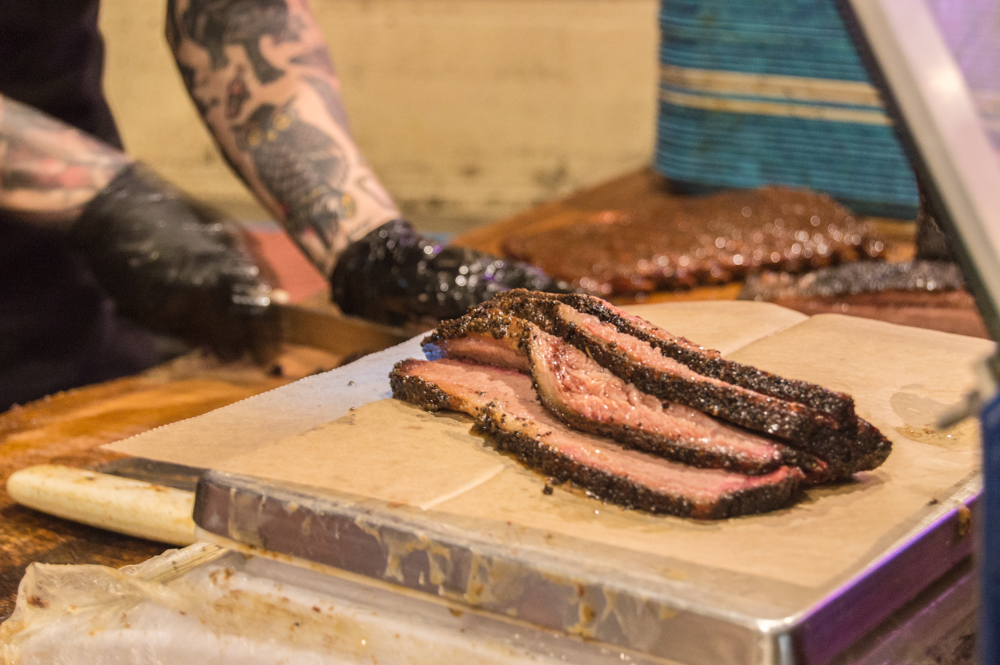 Eating the juiciest fattiest brisket in the whole world and not regretting for a second the decision to come here! 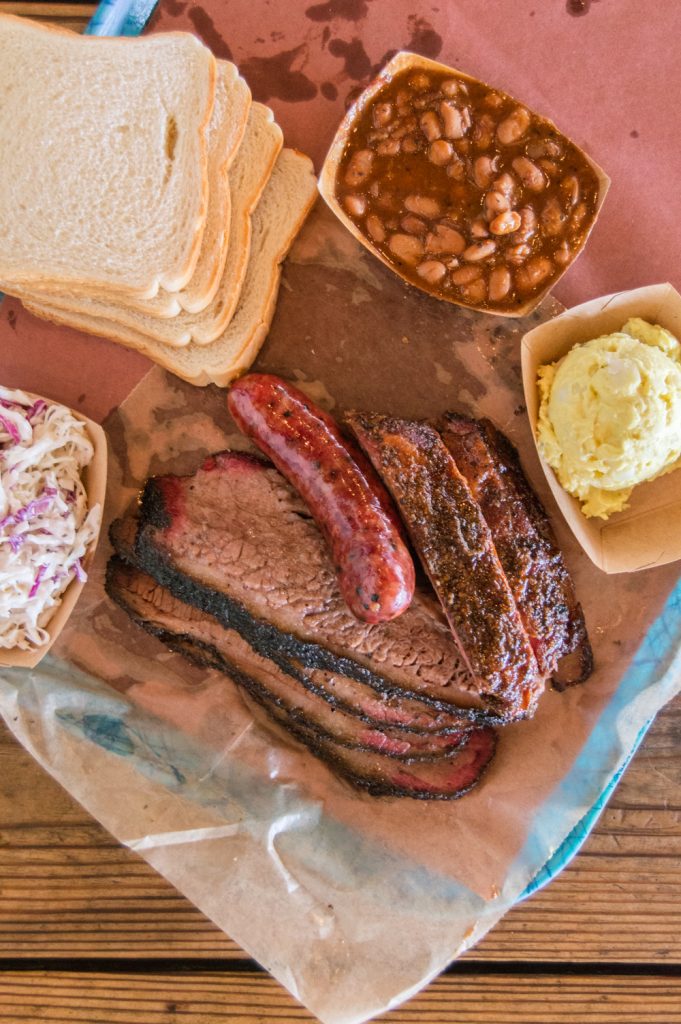 Waiting in Franklin BBQ Line: Is It Worth it?

My answer is a resounding yes! But here’s what I have to add. If you are traveling to Austin, this is an awesome thing to do not only because the brisket is delicious, but because the line itself is an experience (the line even has a Twitter account!). Yes, waking up early is a pain, but you’ll meet Austinites and travelers from all over the country in the line, make connections with people who love food and Texas, and have a fun story to tell.  Having said that, I don’t think it’s a good idea if you are visiting Austin for only a day or two, especially on the weekend when Franklin BBQ line gets especially long. Spend the little time you have exploring the city.

Watch me complete my first challenge!

First challenge is officially completed! I am one step closer to becoming Texan! Next up is learning to dance Texan two step! Good luck to me! 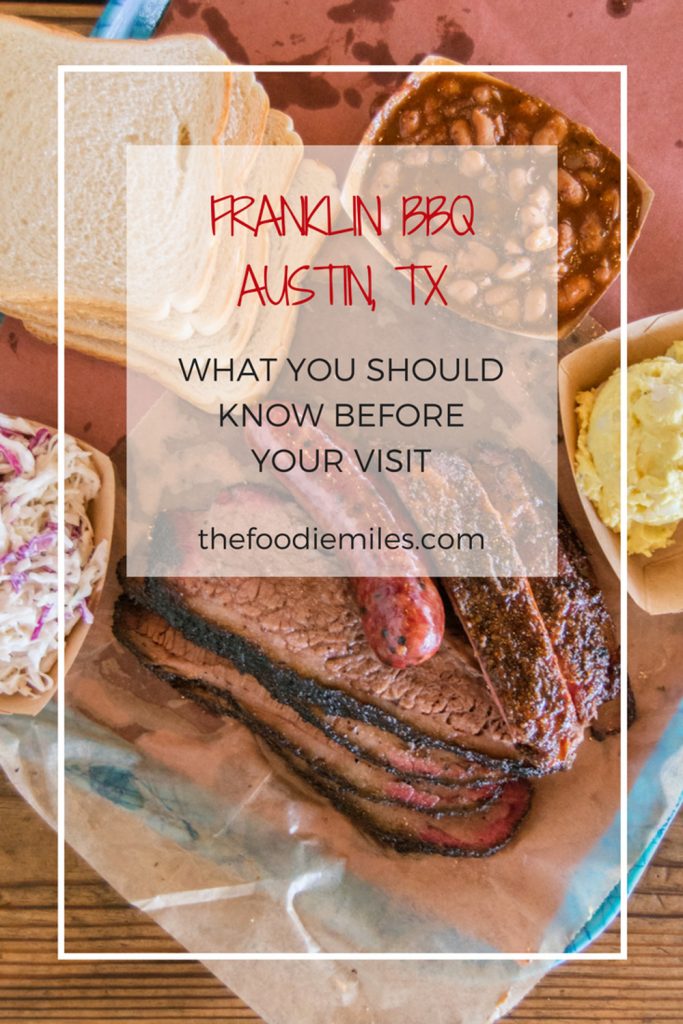