Every January I sit down with magazines, scissors and glue to make a wish board. Every January for the past three years I glued a picture of a sophisticated dish on a large white plate to represent a meal at Michelin-starred restaurant.

As per visualization law, I imagined myself all dressed-up sitting in a fancy dining hall and eating a 9-course dinner. As per Murphy’s Law, I happened to have my first Michelin-starred meal served on a paper plate at a hawker center. You see, my first ever Michelin meal took place in Singapore, at the cheapest Michelin star restaurant in the world. 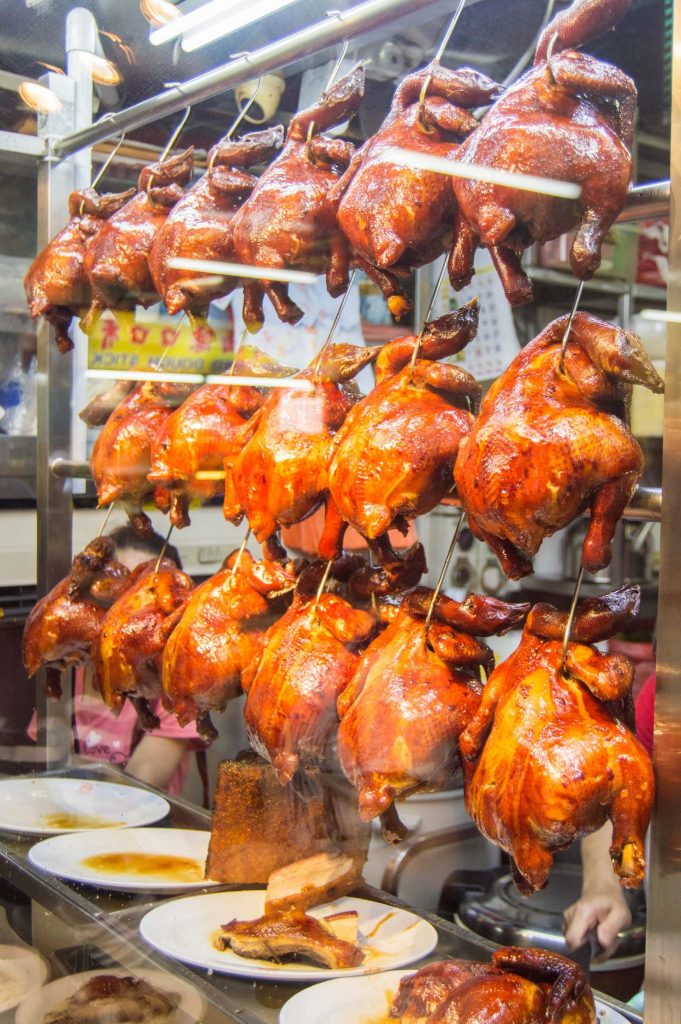 In 2016 Hong Kong Soya Sauce Chicken Rice and Noodle, an unpretentious stall in Singapore hawker center, received 1 Michelin star.  Trying their chicken rice, Singapore’s national dish and the cheapest Michelin-starred meal in the world, will set you S$2 (US$1.5) back. 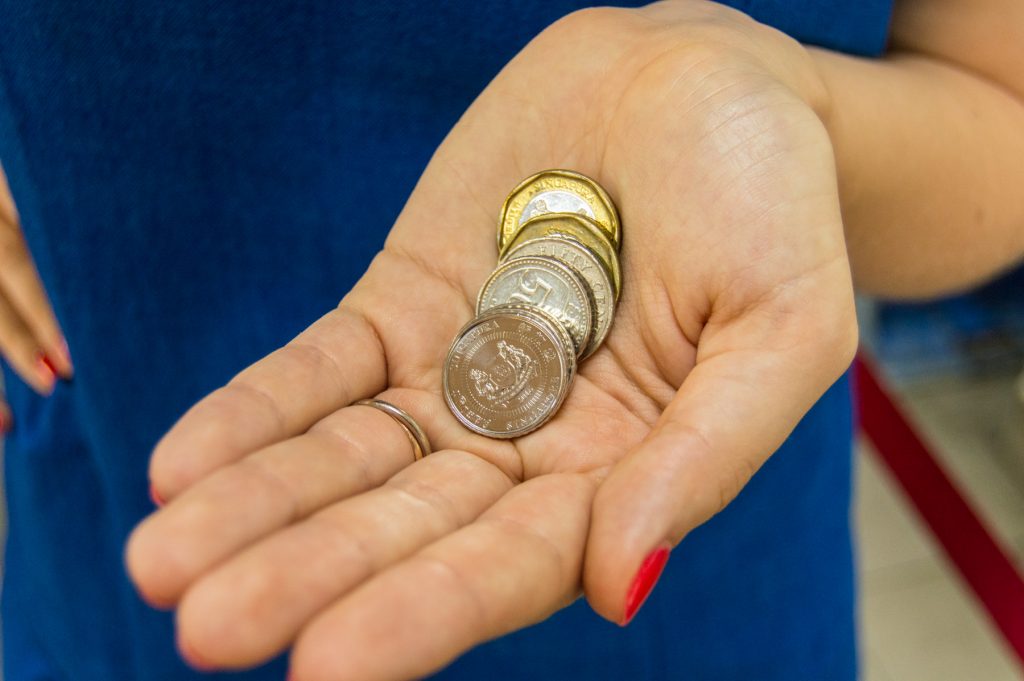 Four Singaporean dollars will get you a lunch for two at the cheapest Michelin-star restaurant. By the way, a good thing to know when traveling to Singapore — carry some cash with you.  While Singapore is super modern and you can pay with a credit card in most places, at hawker centers you’ll still need cash.

To say eating here was on the top of my Singapore agenda is an understatement. I headed to China town on the first day in the city straight after a 24-hour flight. 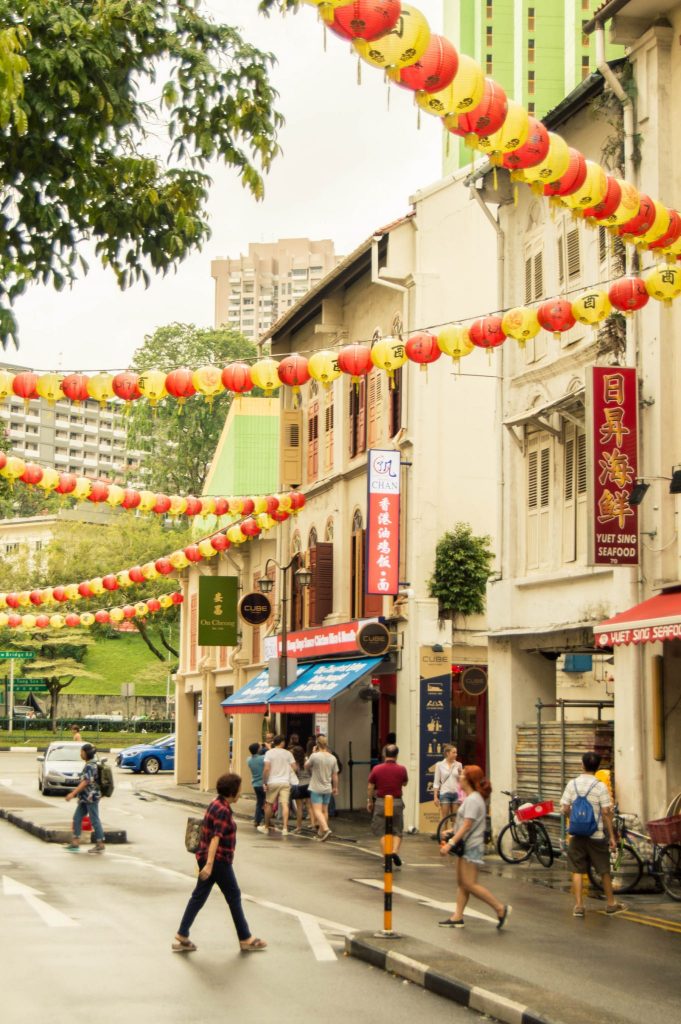 The streets of Singapore’s China town

Standing in front of what looked like a proper restaurant with tables and chairs and a larger-than-life sign I felt dissonance between my expectations and reality. In this case, though, reality was way better than expectations. So clean and neat… 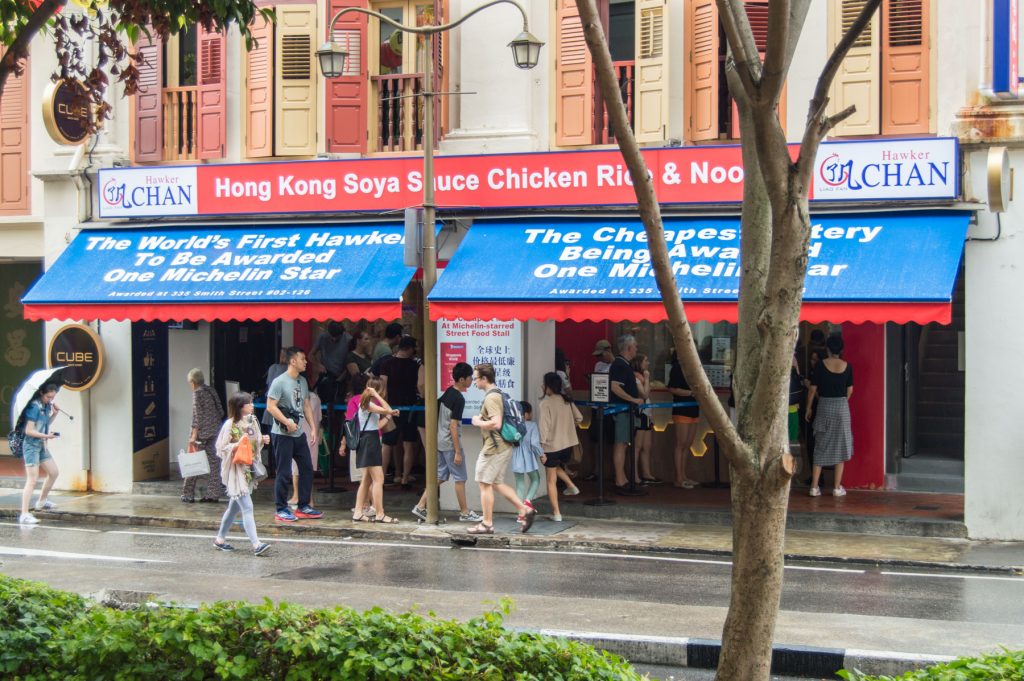 Google maps was adamant I was in the right place. The line in front of the door also indicated I was in the world-famous hawker center stall. What exactly a hawker center is I didn’t know on my first day in Singapore and that was the source of confusion. Something felt off. What I am going to say next will sound strange, but… finding a clean comfy restaurant instead of a small street food stall felt disappointing.

As it turned out, the instinct was right. The restaurant in front of me was a newly opened branch. To find the original stall all I had to do was turn around and walk into a complex across the road, for that’s what a hawker center is – an open-air complex with many stalls inside selling inexpensive local food.

I could have the exact same food at the comfort of an air-conditioned restaurant opened by the same chef, but technically that restaurant doesn’t have a star. The chef, Chan Hon Meng, received his Michelin star for the hawker center location and it doesn’t automatically apply to other restaurants in the chain. 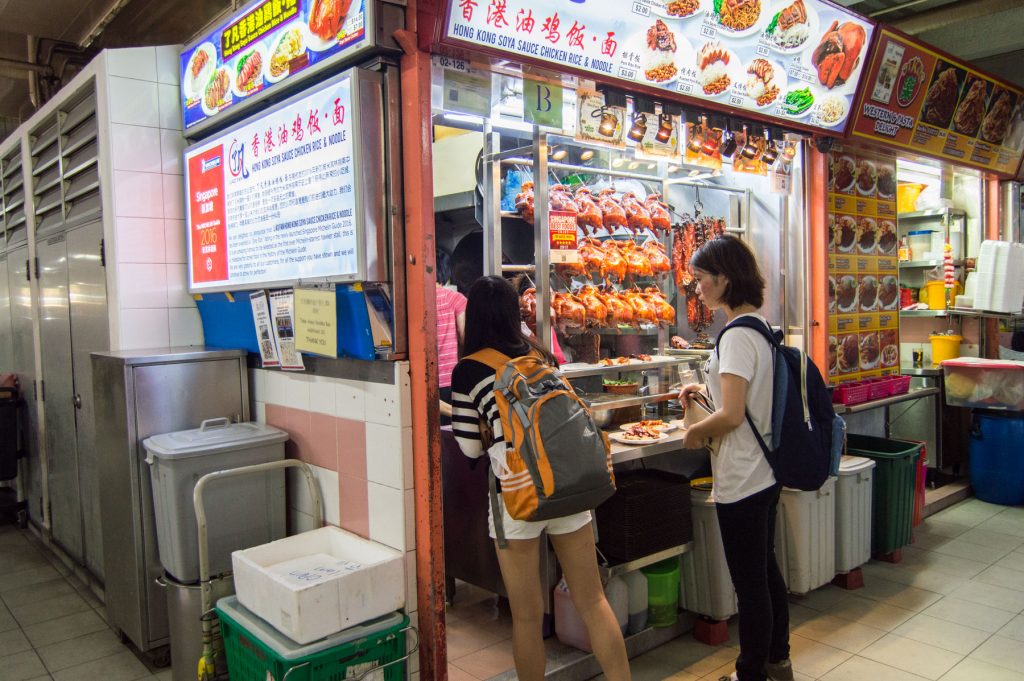 There’s no distinction between Hong Kong Soya Sauce Chicken Rice and Noodle and other stalls in hawker center, except for the long queue of hungry tourists with phones and cameras in hand. I am guilty of being one of those annoying people hanging out near the grill in hopes of a perfect shot until I was scolded by the cook and asked to move. Well deserved, Yulia.

Reviews online will try to scare you away by saying there’s a two-hour wait line, but in my case it was only half an hour. Two minutes after placing an order I was holding a plate of hot chicken rice in my hand still unable to believe I am about to have my first Michelin meal.

Chicken rice is something you will find on every corner of Singapore, in both street stalls and upscale restaurants. The seeming simplicity of this dish is what wins you over at the first sight: poached chicken served on top of white rice with dipping sauce of freshly minced red chili and garlic.

As Prianka Ghosh describes the cooking process on The Culture Trip:

“The first step in making Hainanese chicken rice is poaching the entire chicken at once, with many chefs swearing by the practice of quickly placing the poached chicken in freezing water to create a thick jelly layer all around it. The real test for the dish is the rice, which is made from the stock skimmed off during the poaching process, mixed with ginger, garlic and pandan leaves. Each chef has their own recipe and secret ingredients for achieving the best rice; the ultimate goal is that the rice is tasty enough to eat on its own.” 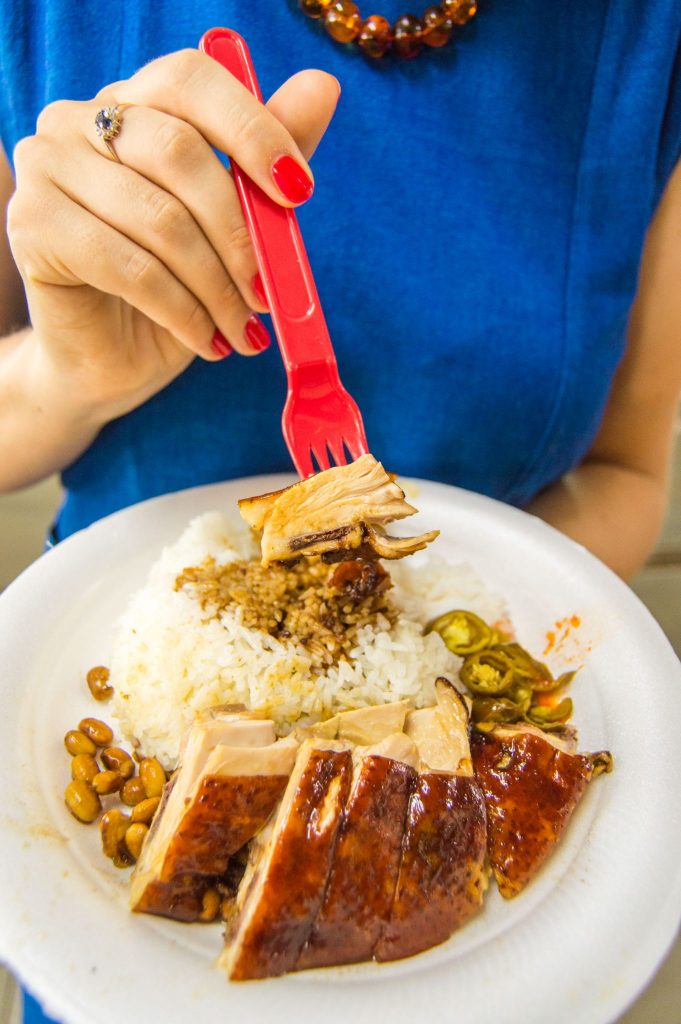 The chicken, moist and juicy, fell apart once I poked it with my fork. Funny story about the fork: I got it along with a kid’s meal that a very caring Russian flight attendant sneaked out for me during the flight to Singapore because he thought I might enjoy kid’s pancakes more than a regular omelet. So I took the fork with me and I use it now instead of plastic cutlery when I eat out.

It was my first ever chicken rice, so I had no point of reference to say whether this one was better than any other in Singapore. It was a genuinely good meal, but I couldn’t shake off the feeling that I expected a little bit more. I can’t help but wonder: would I feel different if I came to this stall before its international fame? 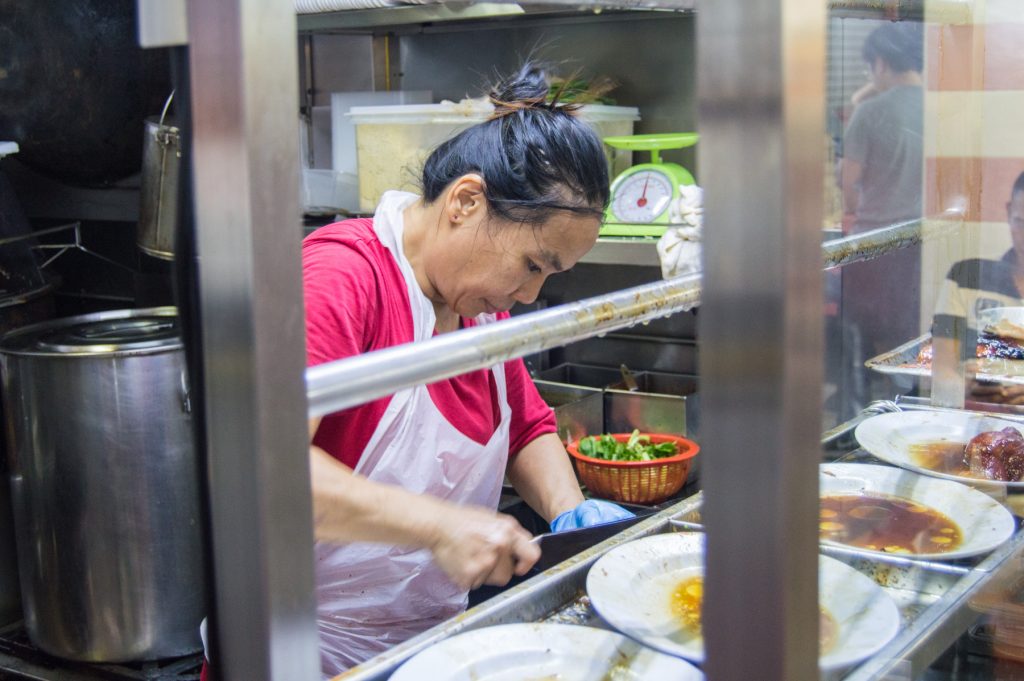 On the two days when I visited, the chef Chan Hon Meng wasn’t at the stall, but his employees are doing a great job of serving the never-ending line of hungry customers

I often think how hard it must be to work after receiving such an honorable award. The next day you come to the kitchen and do exactly the same as you did for all those years before. But all of a sudden every client expects the food to be life-changing. What would be called superb before the star will provoke all kinds of thoughts after: “Does it live up to the fame?” “Oh, I’ve had much better in that little corner shop!” “A street food stall with a Michelin star?”

As a chef, how do you keep going? In the video that got over eight hundred thousand views about his tiny hawker stall, Chan Hon Meng described it best: “I hope that every chef will put in their best effort as if he [the Michelin inspector] is tasting your food at every moment. That is out most important takeaway and only then will your food display your passion.”

Have you ever eaten at a Michelin-starred restaurant? Would you wait in line to try chicken rice at the cheapest Michelin-star restaurant in Singapore? 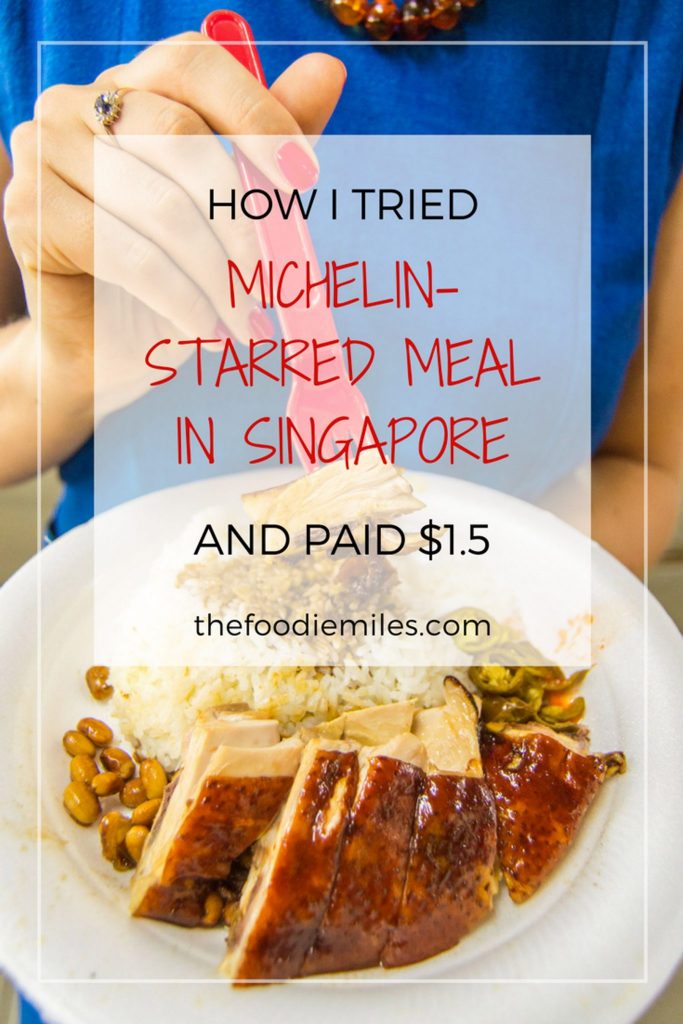