I was sitting next to a couple of strangers, tapping my foot under the table, impatiently waiting for my order to arrive. From the pictures above the table Johnny Depp and Bill Clinton were smiling at me. The place is so famous there isn’t an inch of free space on the walls; they are covered with photos of celebrities who enjoyed a sandwich at this famed NYC deli. With crowds all around, I had to share a table with a couple I’ve never seen before but that’s normal at Katz’s Delicatessen. 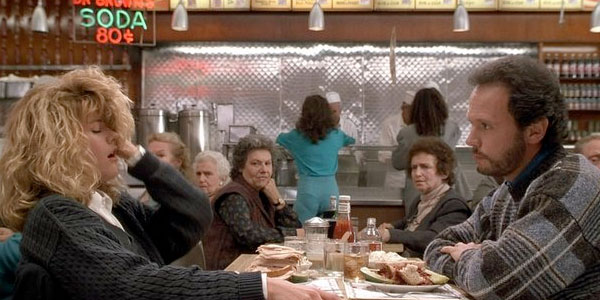 Apart from delicious food, there’s another reason why people stay in line to get inside: Katz’s Deli was one of the filming locations for “When Harry met Sally”. The famous fake orgasm scene from the beloved romantic comedy is what brought me here. But as it turns out, Katz’s Deli was a phenomenon even before its movie appearance. 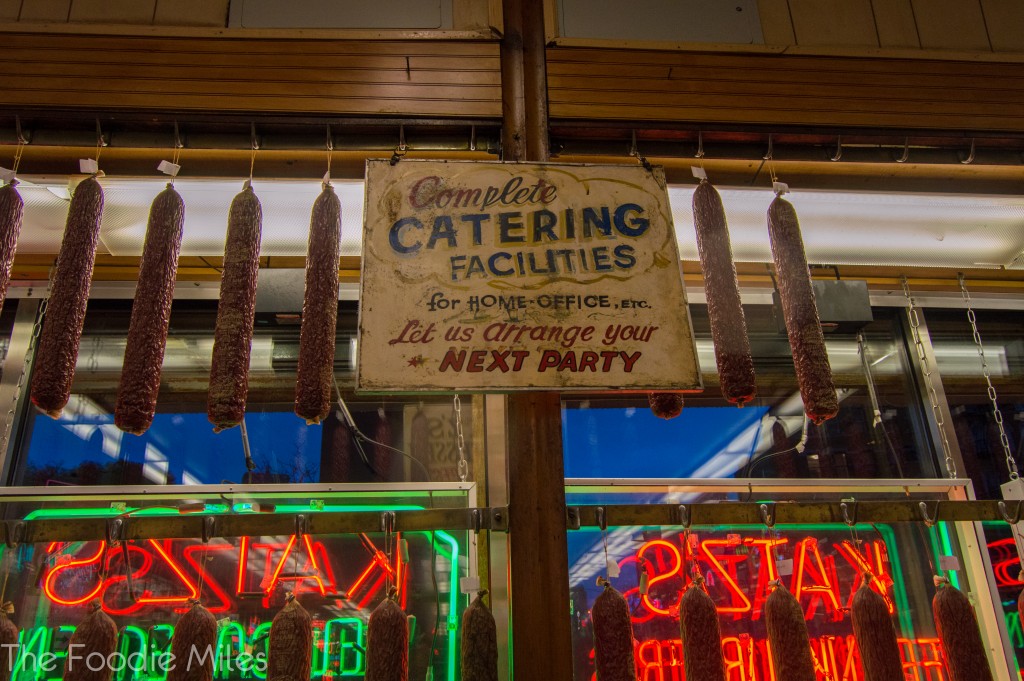 New York Delis and Where They Come From

When you talk about cheap eats in New York, you have got to mention New York delis. But what exactly is a deli and why New York delis are so popular?

Delicatessen originally means delicacies or delicious things and came to English language from German word delikatessen, which earlier was borrowed from French délicatesse. The first American delis reminded more of a grocery store or a kosher butcher shop which only sold meats and delicacies by weight.

Over time they moved on to serving prepared food and evolved into a deli we know today – a synthesis of a grocery store and a restaurant. You can sit down and have a fresh sandwich over the counter or just drop by to get cold cuts by weight.

The first delis were opened by German and Italian immigrants but it was Jewish immigrants who truly revolutionized it by serving take-out food. Today the most famous delis in New York are Jewish. 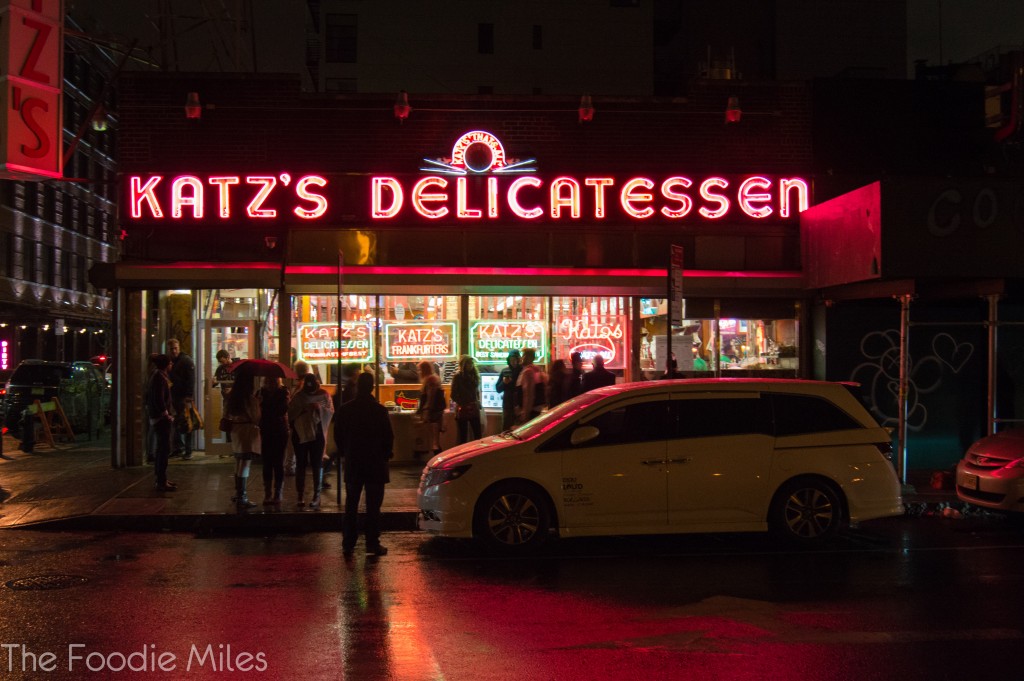 Katz’s Deli: Serving Pastrami for Over a Century

Katz’s Delicatessen was first opened in 1888 in lower East Side New York, but at that time the deli was named Iceland Brothers. The name changed in 1903 to Iceland and Katz upon the arrival of Willy Katz to business and changed again to Katz’s Delicatessen in 1910 when Willy’s cousin joined and bought out the Iceland Brothers. The original location on Ludlow Street also changed to nearby Houston Street. That’s where you can find it now. 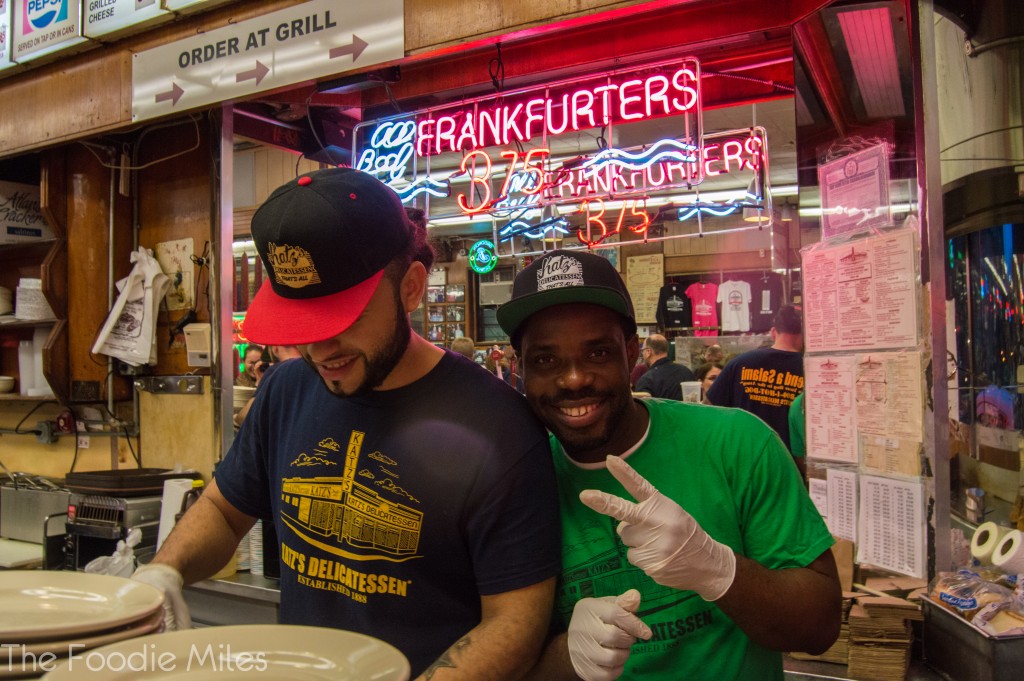 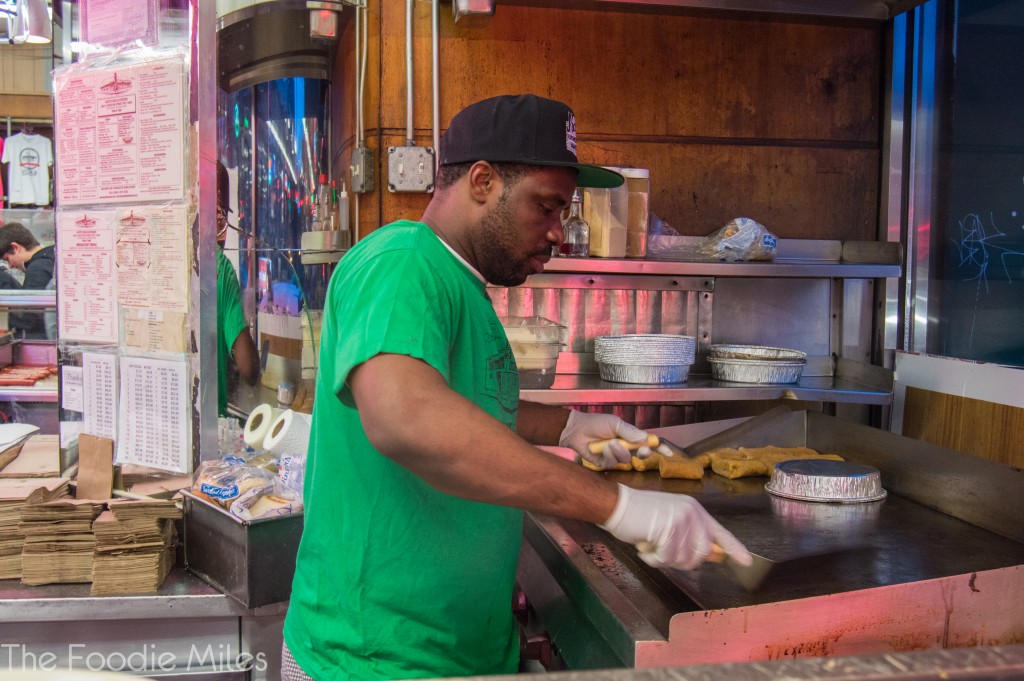 The place is surprisingly big for a deli. You can choose whether to be served over the counter or get a table to sit down. 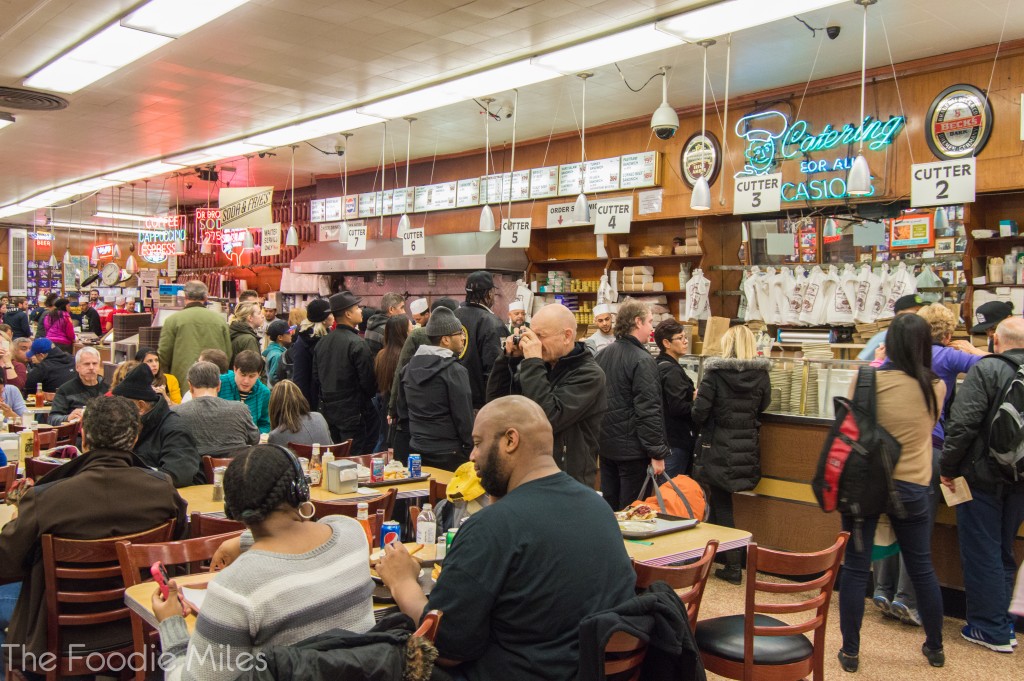 If you are lucky enough you might even get a table where Meg Ryan and Billy Crystal were sitting during filming. There’s a sign above the table. 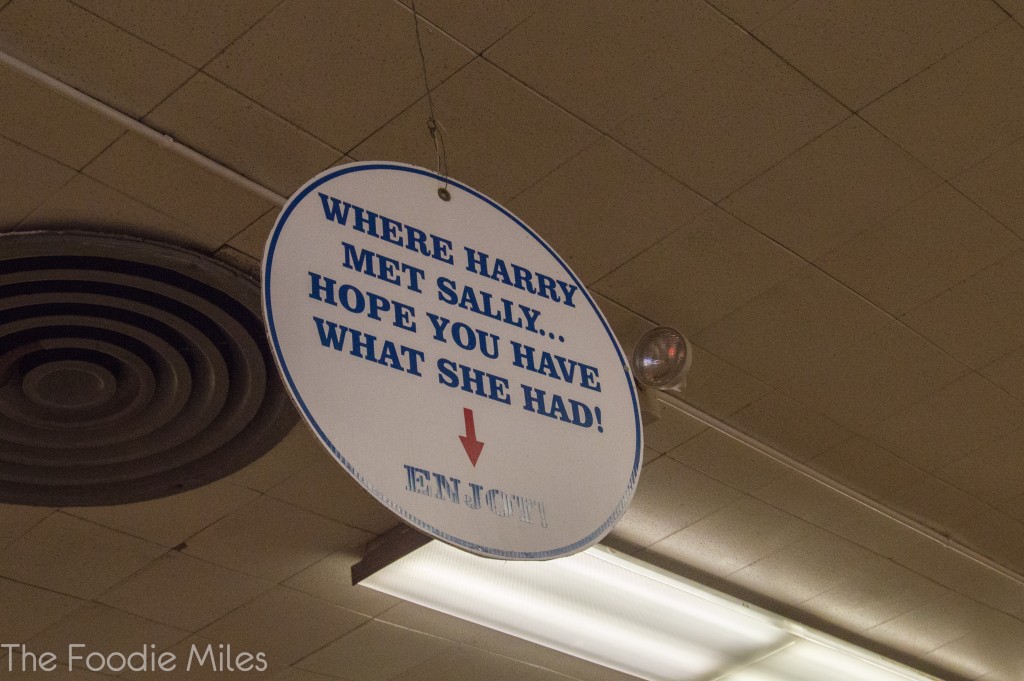 At the entrance every customer gets a ticket which is both a check and an exit pass. Servers make marks on it when you purchase goods, afterwards you pay total at the cashier. Losing the ticket means you are going to pay $50 extra, the management explains that that is how they encourage customers to go back and look for the lost ticket. In case somebody else finds it, they can use it to pay less than what they actually ordered. Bottom line: don’t lose the ticket!

What to Order at Katz’s Deli

So what do you order when in Katz’s Deli? Matzo ball soup, sandwich with corned beef, or pastrami on rye are traditional choices. You can say these are the most popular items just by looking around. I went for a matzo ball soup, pastrami on rye, and baked beans on side. The couple next to me, not surprisingly, ordered just the same. 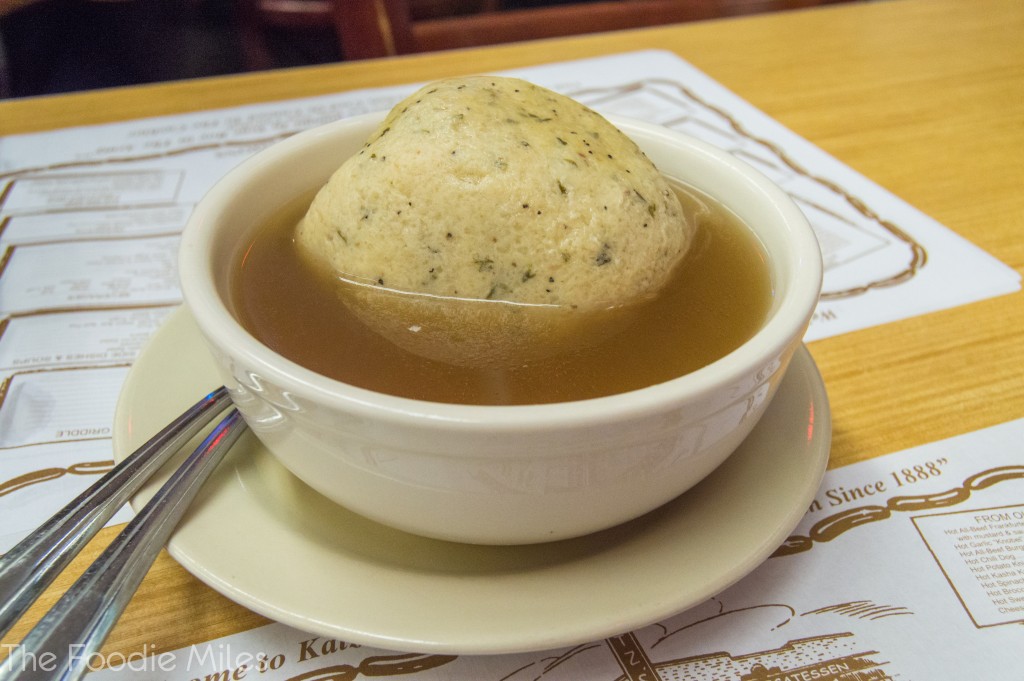 It says on the menu: “If the soup weren’t surrounding it, this matzo ball would float away!” I can promise you, indeed, it would! It is such a light and fluffy substance that to a person like me, who has never tried this soup before, matzo ball is a total mystery. 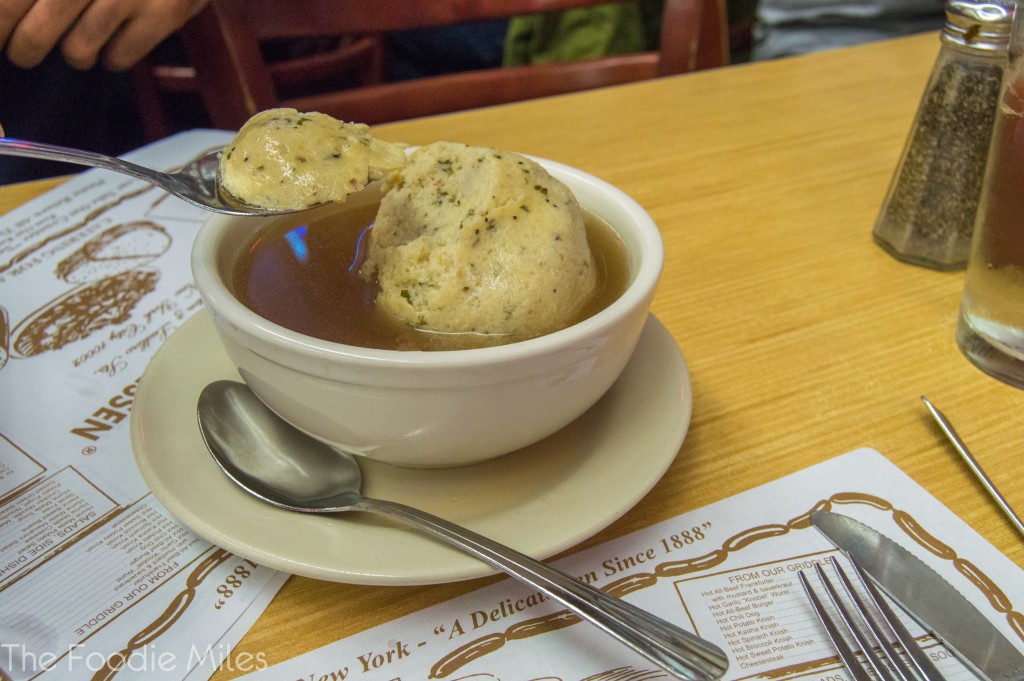 Neither by looking at it, nor by taking a bite could I come up with a single idea how it’s made. As the server explained, matzo ball is unleavened bread made with matzo meal; eggs and oil are used as binder. The balls are simmered for about 30 minutes until they float on the surface. The ball looks really big and heavy, but it doesn’t go down to the bottom of the bowl. 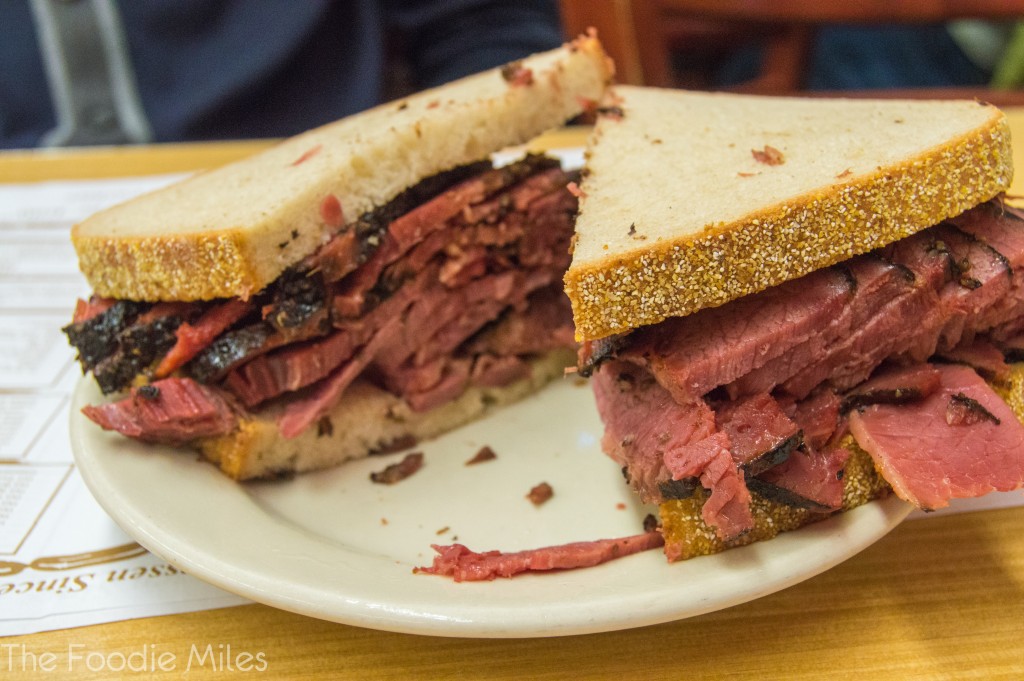 The iconic pastrami on rye at Katz’s Deli

Traditionally, pastrami is made from beef navel which is a small piece cut from the muscle known as the plate. Katz’s Deli prides itself in making pastrami the old-school way. They cure meat for 3-4 weeks, it is then smoked in a smoke-house for 48 to 72 hours under a very low temperature. After the smoking process is done, meat is boiled for 4 to 6 hours – longer than anyone else would do – and, finally, steamed for another half hour, then cut by hand.

The sandwich is huge and can be easily shared. In fact, the deli dares you to finish it all on your own. The only disappointment is rye bread. Being from Russia, I am used to rye bread that is dark-brown in color and denser in texture. The bread in this sandwich looks and tastes nothing like rye to me, but it doesn’t spoil the overall experience. 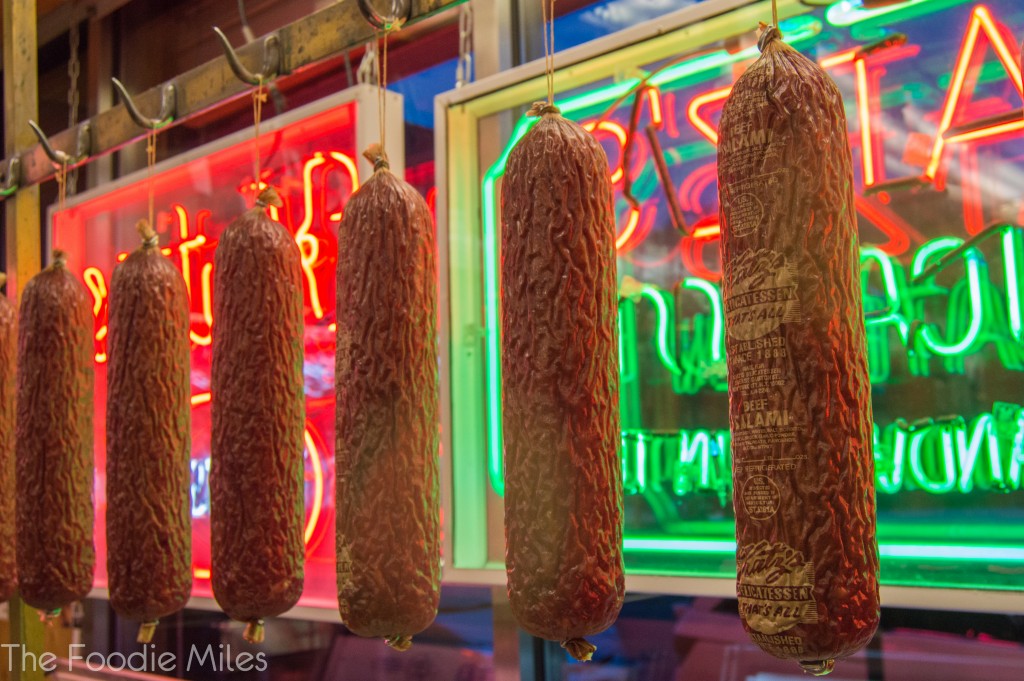 Even after sharing a soup and a sandwich with my husband, I had to take a 10 minute break to recover before going to cashier. Just when I thought I couldn’t eat anymore, I saw salami hanging from the hooks on the window. I was so tempted to get it but walking around New York with a stick of salami in hand didn’t seem like a fun perspective. Until next time then.

By the way, the name of the street is pronounced “House-ton” after a Dutch emigrant of the same name. 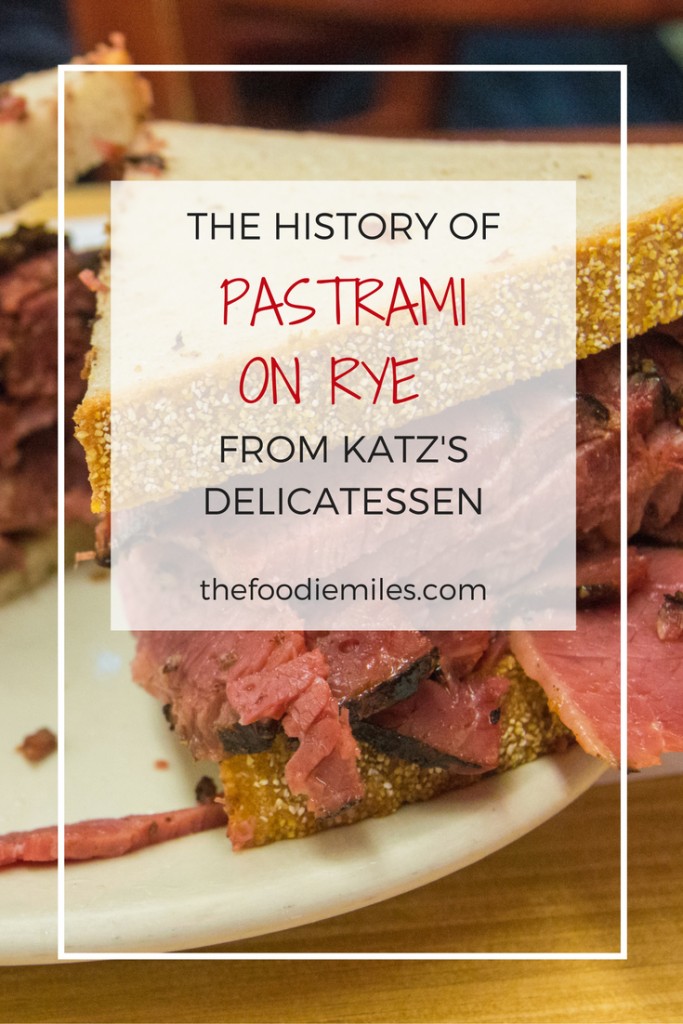