Being a Woman and Traveling Solo in Sri Lanka

When I was 22 I packed my bag with extremely unfitting clothes like a figure-hugging pink dress and high-heeled shoes — come to think of it, I didn’t pack those, I was wearing them on a ten-hour flight from Moscow to Colombo — and left to Sri Lanka for half a year.

You know how much research I did before going half way across the world to an undeveloped country? I’ll tell you. Ready? First of all, I opened Google and typed in “Sri Lanka”. Then I clicked “Images” and scrolled through the pictures of white sandy beaches and palm trees. Then… oh wait, that’s it. That is all the research I have done.

My mom did better. She dug out Soviet encyclopedias from a dusty book shelf. We had all twelve volumes, each dedicated to a sphere of life like geography, biology, physics, literature and so on. Having opened volume seven “Countries” on a page describing Sri Lanka, she saw pictures of half naked men wearing a tiny piece of fabric around their private areas and digging ground in search of precious stones. “Sri Lanka is famous for its cornflower blue sapphires” said the caption, or something like that. “That’s where you are going?” 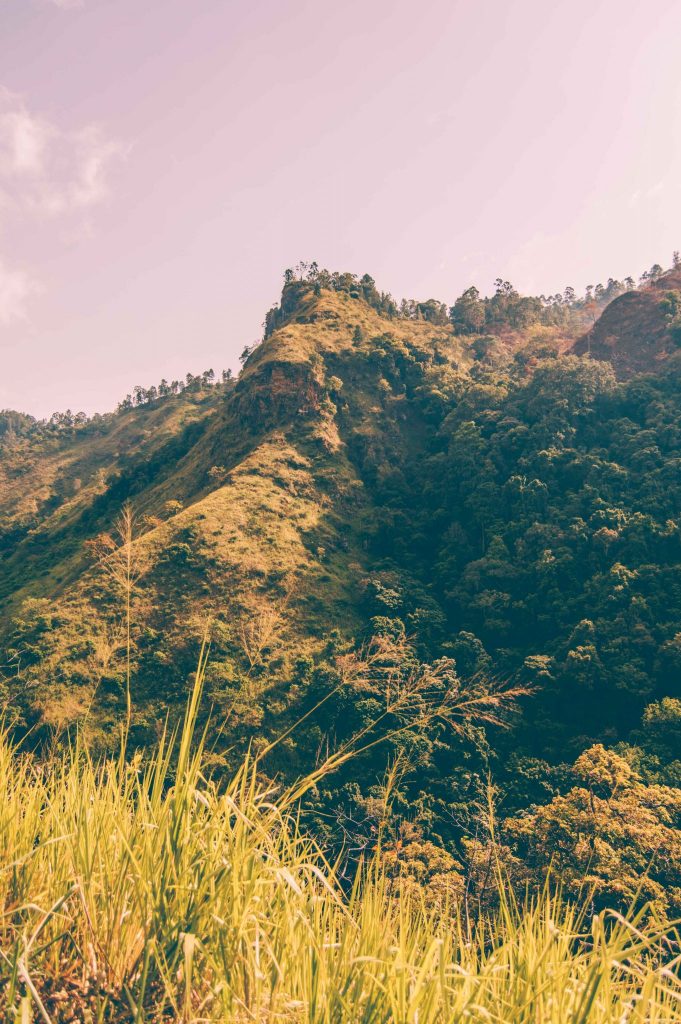 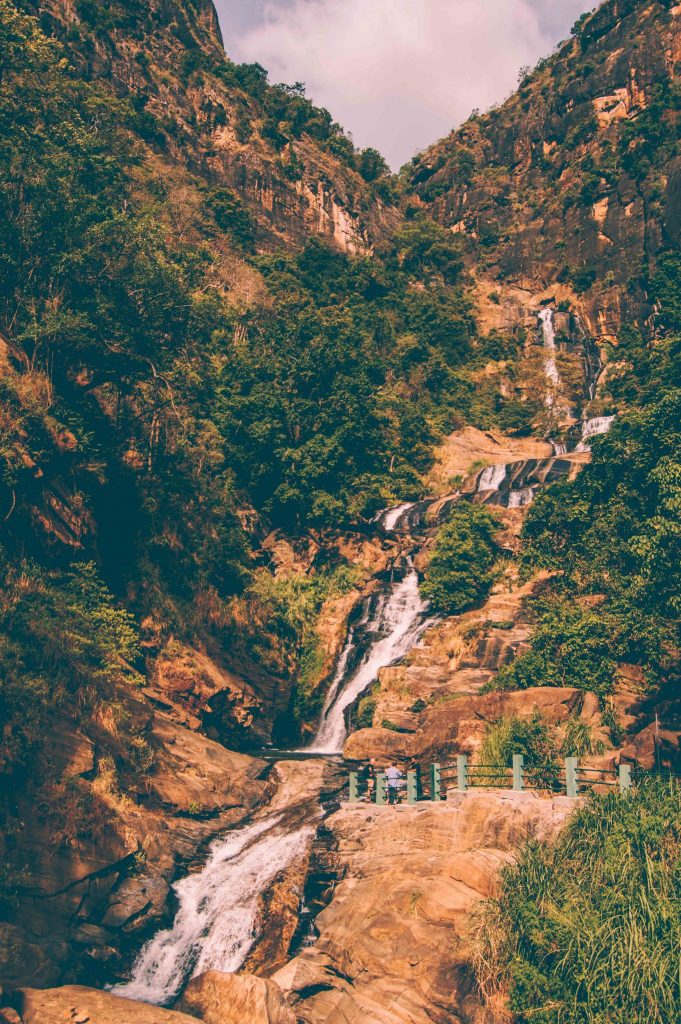 My researching and packing abilities aside, I am proud of my twenty-two-year-old self. I wanted to see the world, I seized the opportunity and did it. What was I thinking? I can’t remember well now. I think I was scared. Scared that the program I used to find an internship in Sri Lanka was a big scam, scared no-one will be there at Bandaranayake International Airport to meet me, scared the promised three hundred dollar salary wouldn’t be enough. I did it anyways. At twenty two.

At twenty nine I was sitting at one of my favorite cafes in Colombo contemplating a week-long solo trip to Sri Lankan hill country and I was nervous. The fact that I was nervous was really irritating. How did I pack my bags and come to a country I knew literally — and I mean literally — nothing about at twenty two, but was nervous to take a short trip around the same country after living here for years, learning basic Sinhalese, and getting to know all the possible ways a tuk-tuk driver could rip me off? 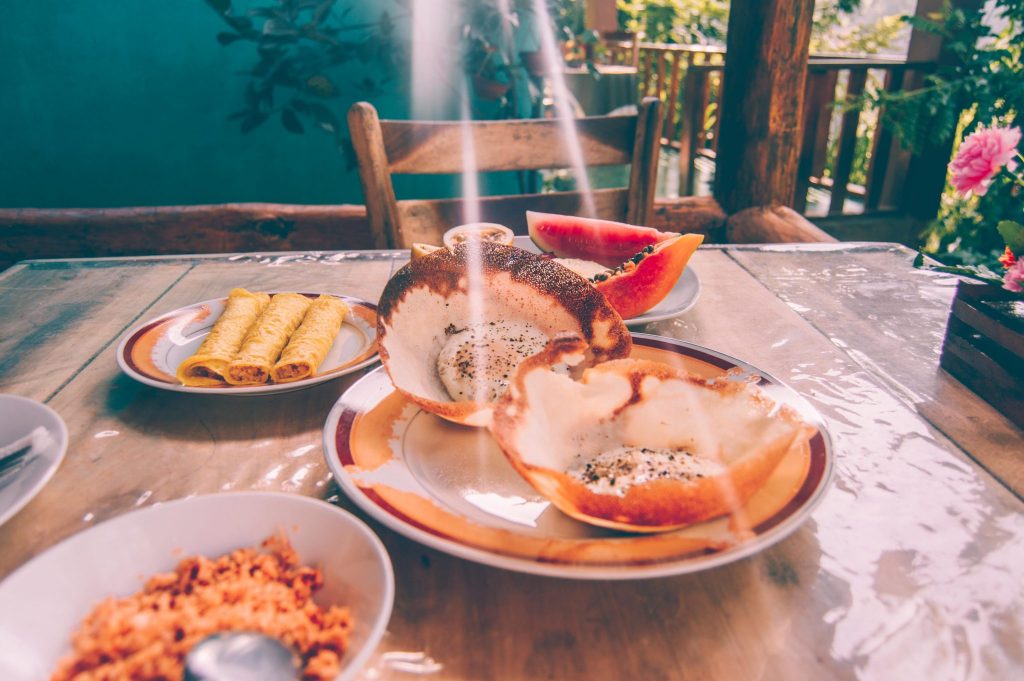 Breakfast for one in Ella, Sri Lanka

The scary part is doing it solo. I have traveled alone between continents, countries, and cities, but there was always someone waiting for me on the other side. Someone to pick me up, to have coffee with me, to help me settle. I wandered around cities in solitude, but those were big cities in developed countries, where rules apply, where people drive in their lanes, where you don’t find ants swimming in your tea if the cup was left unattended for a few minutes.

I came to Sri Lanka alone and I left that aloneness at the airport upon arrival. I traveled the country with other interns, with friends who came to visit from Russia, with my boyfriend who turned my husband, with his family and with my family, but never solo.

“How much different can it be?” I thought searching for hotels in Kandy and Ella. I was still nervous, but all the more resolved to make the trip happen. Turned out, very different. There is a million things you don’t notice when you travel with a companion, especially with a male companion, even more so if the male companion is local, which is my scenario.

Traveling with my husband made my life a breeze. We’d always take the car and drive to whatever remote village we found on the map, not worrying about the public transport or lack of thereof. If we were lost, he’d ask directions from locals in Sinhalese. If we had to book a hotel, he’d call and get a local’s discount. I got relaxed and comfortable in our travels which is not a bad thing until you have to face traveling solo again. 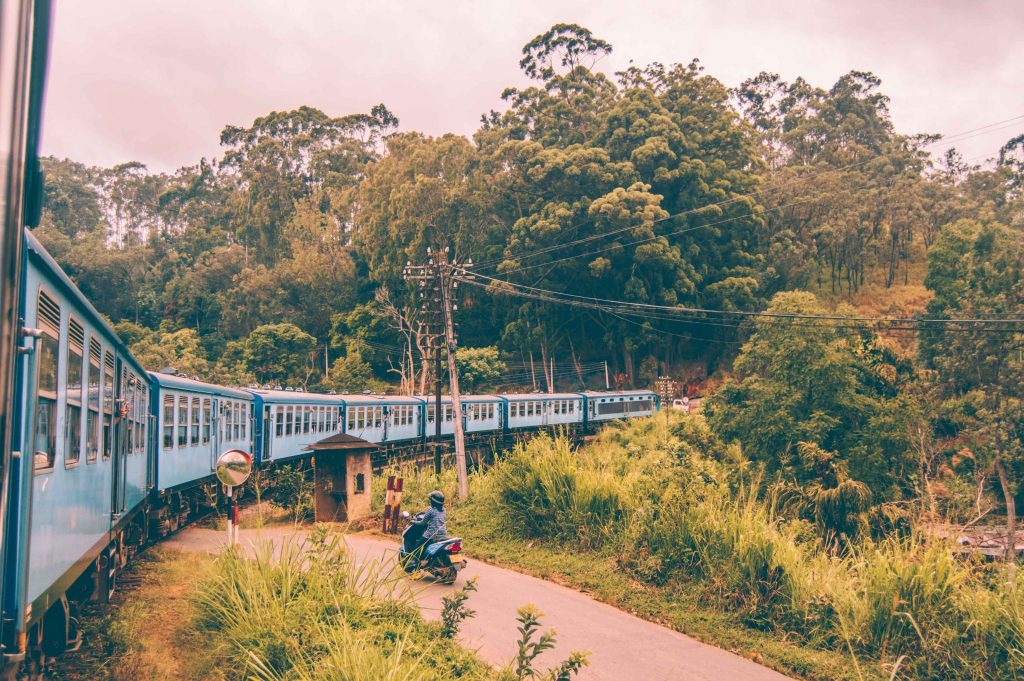 Taking the train from Ella to Kandy

Once I hit the road, it was all familiar and unknown at the same time. I was seeing a lot of the same things, but I was feeling about them differently. I wouldn’t pay attention to a man staring at me at the railway station if my husband was around, but I was feeling his presence and his intent look when I was alone.

With my husband, I saw a lot of local travelers around. Alone, I realized that local travelers are either whole families or big groups of young men. The latter made me feel anxious every time I’d run into such a group at lesser-known attractions. Most of the men, being in their early twenties (which in Sri Lanka equals to Western fourteen to fifteen), stared, chatted loudly, and laughed when I was passing by. 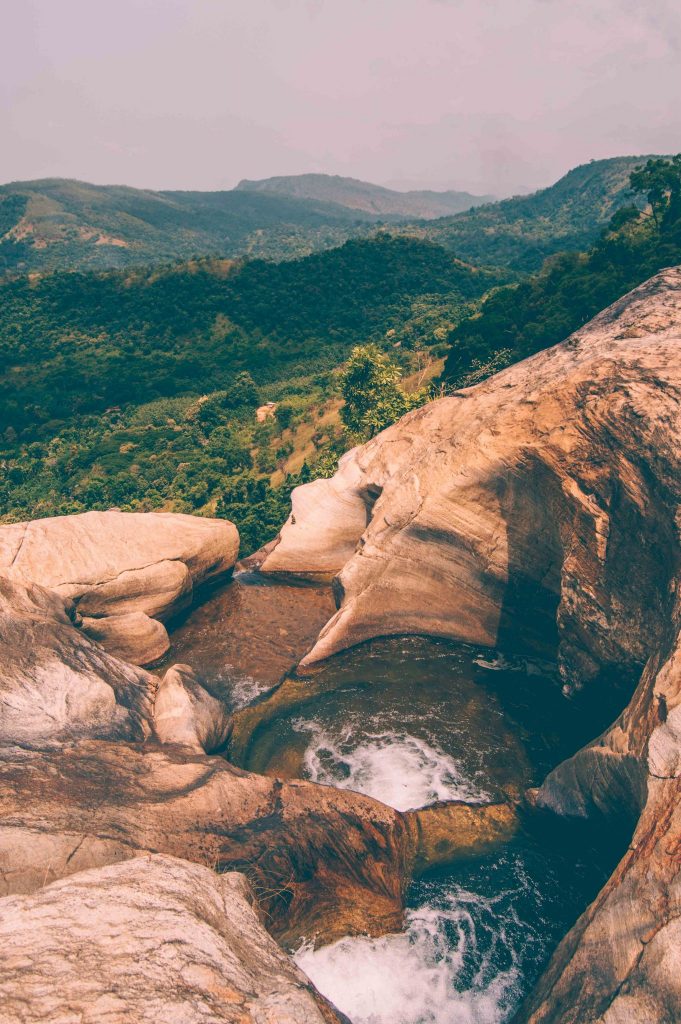 On top of Diyaluma Falls which I left as soon as a man came up and asked if I am single and why I am traveling alone.

If you are reading this and you are a young man, here are a few general tips. When traveling with a big group of your friends — and I am sure y’all are great guys and never mean anything bad — do not stare at women, it makes us feel uncomfortable. Preferably, don’t shout out things, even in your own language, actually, especially in your own language. Maybe you are shouting “Dear madam, may I kindly help you?”, but for all I know it can be “Hey girl, is your mom looking for a son-in-law?” And please, do not come up and start a conversation by asking “Are you single? Why are you alone here?” It’s creepy AF. 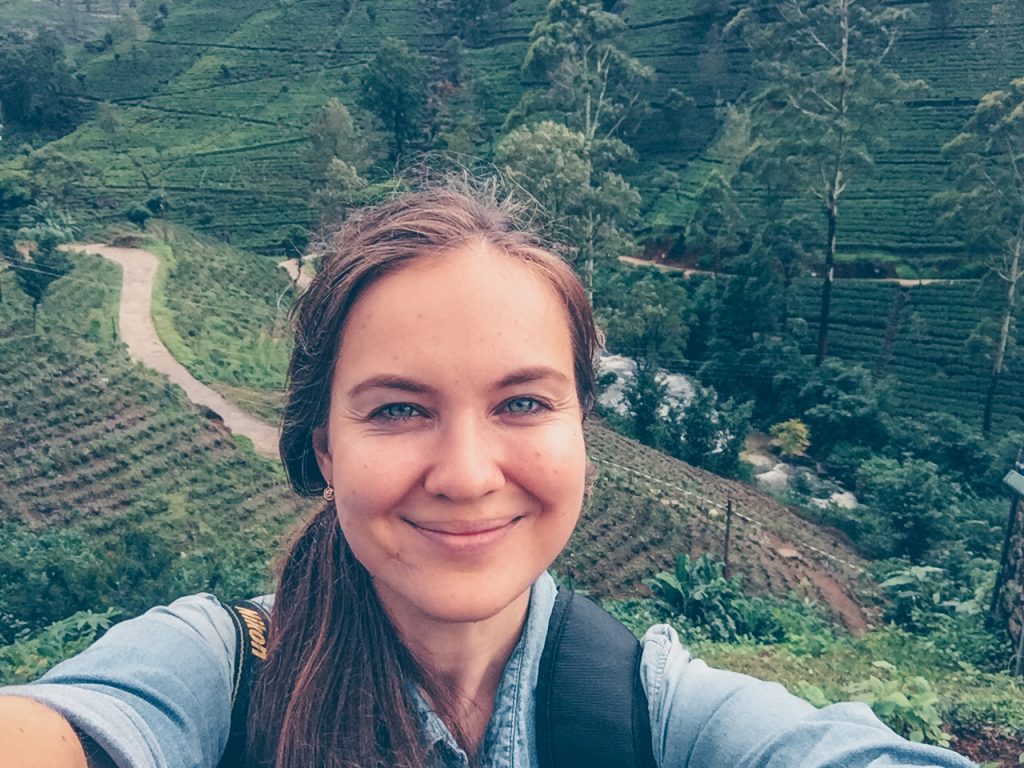 Twice, at the top of Diyaluma Falls and observation point of Ramboda Falls, I had to pack up and leave because the only people around were me and a group of men. That felt unfair. I had two voices in my head. One was saying: “Why should I leave? I hiked up to see all this beauty and now I can’t enjoy the view?” The other, smarter one, was saying: “It makes you feel uncomfortable. Don’t make yourself stay in this uncomfortable state. Go!” I listened to the latter.

The interesting thing is that it’s all in my head. Those men were probably never going to do anything. It’s what I pictured in my mind that made me leave. Nevertheless, the unfairness of the whole situation was incapacitating. If a man traveling solo met a bunch of girls whispering and giggling at his sight, he’d feel self-conscious and flustered at worst, not threatened.

There’s a ton of other little things. Like having to always check Google Maps to make sure the tuk-tuk driver is taking the right way. Like having second thoughts about ordering a cocktail at the bar in the evening. Like trying to get back to the hotel before the sun sets. Traveling alone is wonderful, but oh so tiring! It’s not the things you do, it’s the fact that you have to constantly be alert and ready. You are not tired in your body as much as you are tired in your mind. All the ladies out there traveling the world solo, you rock, you are an inspiration! 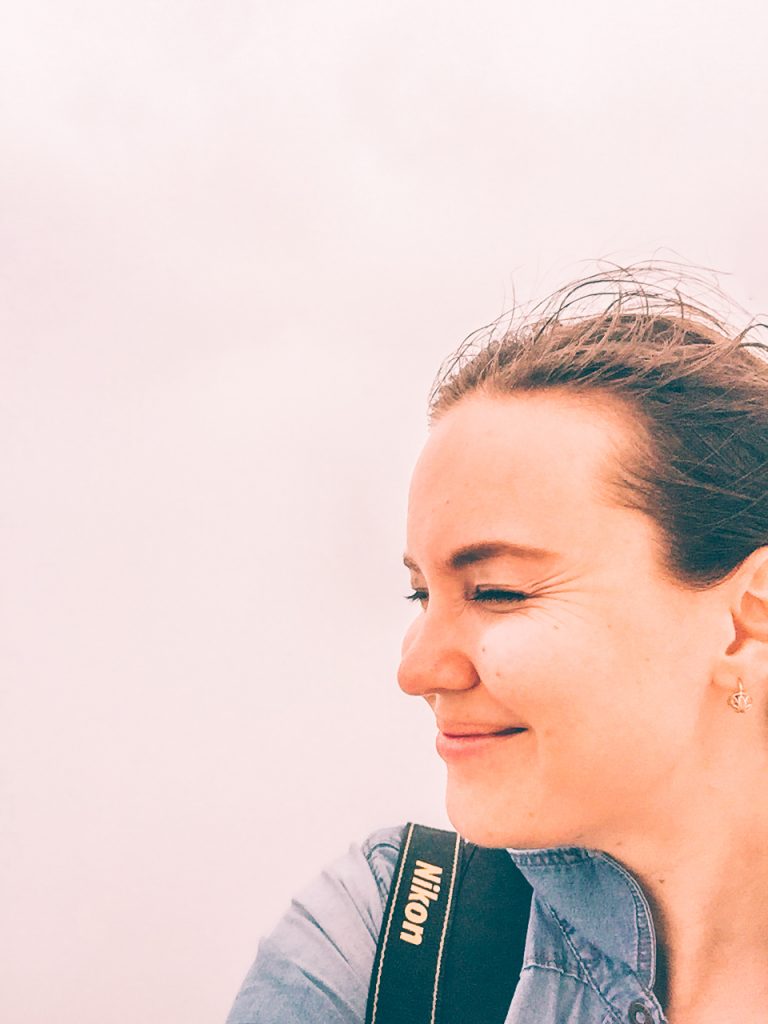 and more selfies! I am on top of Ambuluwawa tower and can’t see anything because of the thick fog

Being on guard is what keeps a woman traveling alone safe, but it also deprives her of experiences. I was driving around Kandy for the better part of the day, when the tuk-tuk driver, who was really kind and friendly, offered to stop by his place for tea. “No!” was my first reaction as it should be. But he was persistent, telling me all about his family and three kids, and how we’d only have a cup of tea and he’d switch off the meter — not to worry! Like extra fifty rupees on the meter is the biggest of my worries with going to his house. I said ok. It was, perhaps, as stupid as that time when I went for a walk in the middle of the night in Brazil.

What made me change my mind? We picked up his nine-year-old daughter and her friend on the way. Driving off the main road with two kids by my side felt safe. Also, the fact that he was a PickMe (local version of Uber) driver, not a random driver I found on the street. The last, but not least, he stopped by a podi kade (little shop) to buy a Swiss roll.

When we arrived, Channa, my tuk-tuk driver, and his wife set up a table on the open second floor of their house overlooking paddy fields so green it hurt my eyes. They made my milk tea with less sugar — those foreigners, what are you gonna do! The Swiss roll was sliced and arranged neatly on a plate. The kids were roaming around, looking at me stealthily, waiting till adults finish tea so they can get there hands on the sweets. I made my best effort at a conversation in Sinhalese with Channa’s wife and kids, which was confusing, but fun. 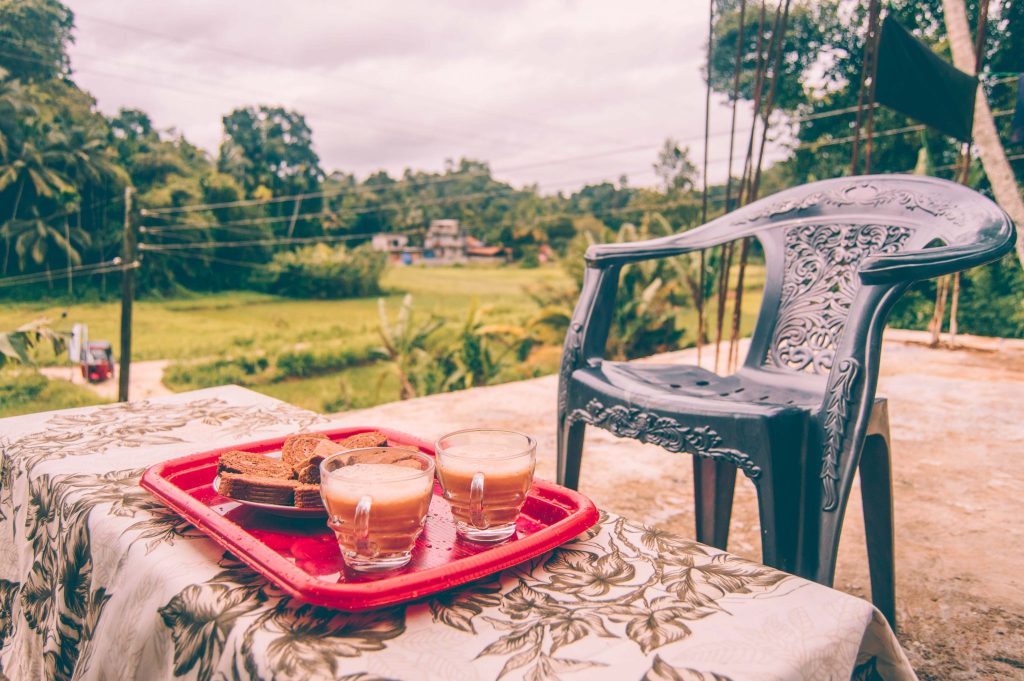 Having milk tea with Swiss roll at Channa’s house. You can see his tuk tuk in the background.

To think that I’d be deprived of this moment if I gave in to my fear! Saying “no” to Channa’s offer would have been the smart choice. Saying yes was stupid, but led to discovering human kindness.

When my day of touring was over, I asked Channa to stop by the one and only shopping mall in Kandy. I told him I’d be back and ran inside for at least twenty minutes. It probably looked like after six hours of driving around Kandy I decided to ditch him without paying. I am wondering if he had the same kind of thoughts that all of this was a big scam, like I did on the way to his house. 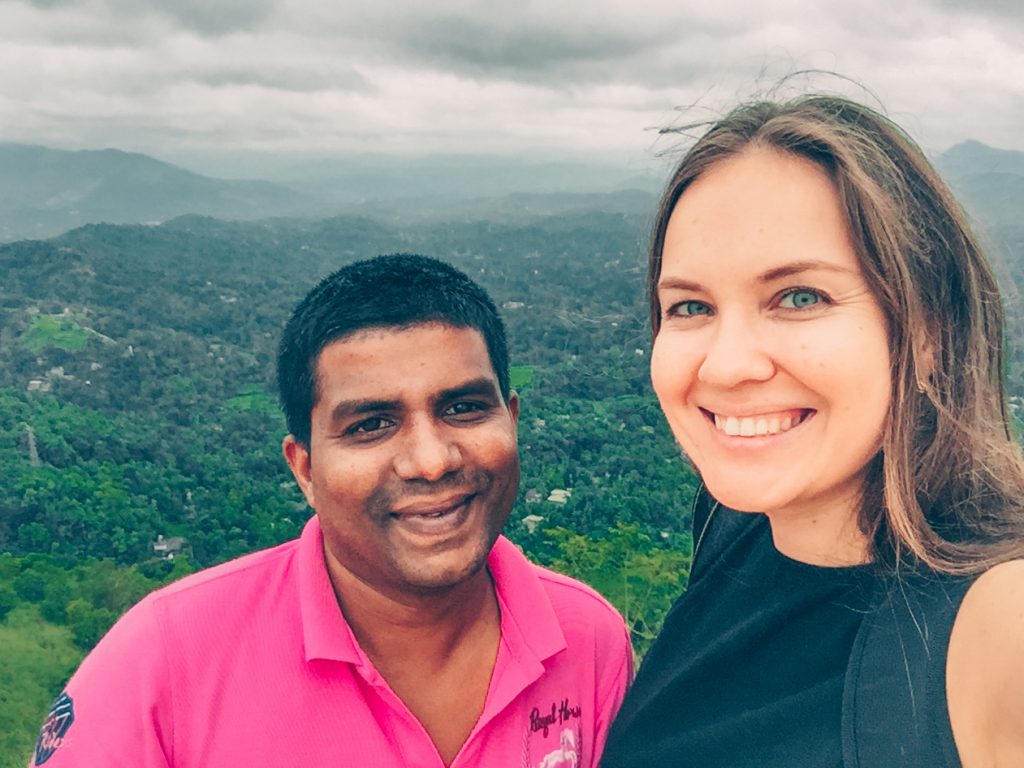 Channa, the tuk-tuk driver who showed me around Kandy, and me.

It took me twenty minutes to find three decent toys in a shopping mall that had no toy store. Three months ago, I wrote a belated, but highly accomplishable list of things to do before I turn thirty, and doing something good for a stranger was on the list. This was my chance to help someone who deserves it, so I got a stuffed cat and a rabbit for Channa’s girls and a robot for his son. I hope they liked the toys.

Traveling solo as a woman is a mixed bag of emotions. There were a lot of uncomfortable situations and gratifying moments. I missed the comfort of traveling with my husband, that relaxed, not-a-worry in the world mode, and I felt proud of doing things not even locals do on my own. I was happy, but tired. When I was in Ella, my best friend sent me a message asking whether I was scared and I proudly and honestly replied with “Hell yea!”