If You Need Good Mayo, Look for a Blue Jar

You’d think when choosing good mayonnaise one has to pay attention to ingredient list, consistency, and color, but for all I care good mayo has to have only one important characteristic and that is — be packed in a blue jar.

The blue jar is quintessential because it indicates that the mayo was made in my home town of Ekaterinburg, Russia. Did you think the best mayo comes from some little town in France? Ha! Say what you will, but the most delicious mayo is produced in the Ural Mountains of Russia, at Ekaterinburg Fat Processing Factory, or EZhK for short. And that is not just childhood nostalgia kind of thing. 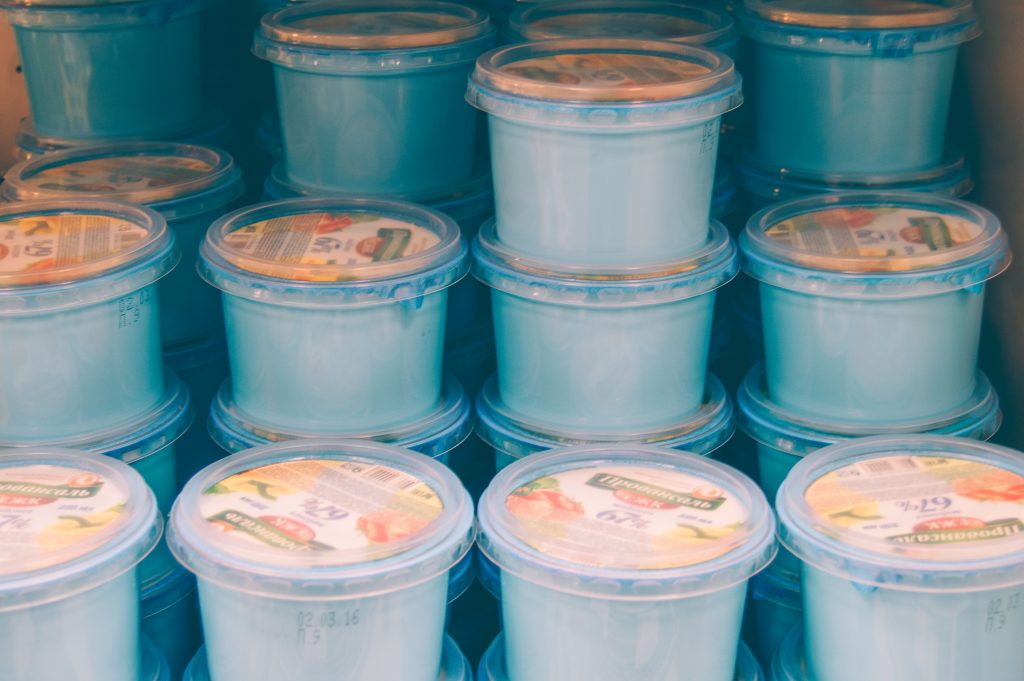 The best mayonnaise comes in a blue jar!

I feel like I have to state that this post is in no way sponsored by EZhK, although I wouldn’t mind if they sent me a couple of kilos of mayonnaise. If anything, I paid a pretty penny for — probably — thousands of blue jars I bought in the course of my life. So all opinions are my own, as they always are, because no one offers to pay me for my opinions.

To realize why I feel so strongly about the jars my mayo is packed in, one has to understand the importance of mayonnaise for Russian cuisine. Just as I always say that coconuts are the lifeline of Sri Lankan kitchen, mayonnaise is the lifeline of Russian. If you ask which Russian dishes feature mayo, I’ll probably reply with “Which ones don’t?” The answer is drinks. Although I wouldn’t say it with 100% certainty because Russia is a big country and there are weirdos out there, so who knows.

But I can tell you confidently that we use mayonnaise in majority of soups to spice them up, in salads to bind the ingredients together, in baked dishes like chicken, fish or potatoes to achieve that crispy creamy layer on top, in dough because mayonnaise is essentially fat and dough requires fat, and on a slice of bread because there’s nothing else in the fridge but a jar of mayo. I have seen with my own eyes a blueberry pie that had mayo as one of the ingredients. So I think it’s fair to say that Russians use mayo in desserts, too. 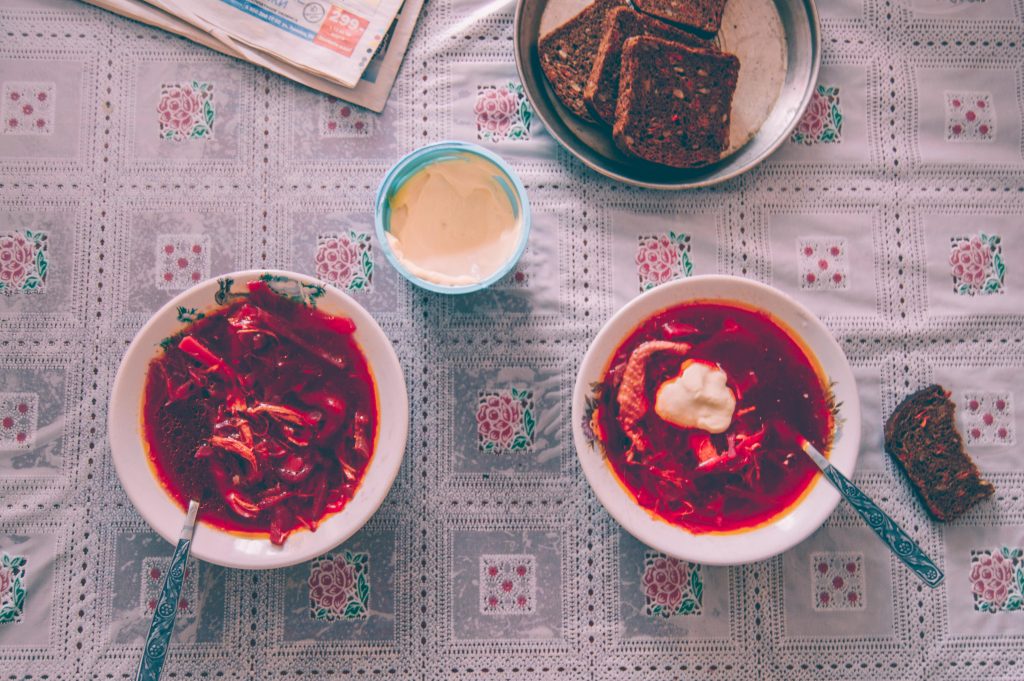 Borsch prepared by my mom and served with rye bread and mayonnaise in a blue jar.

The interesting thing here is what use of mayo one considers normal and what — unacceptable. For example, my mom would always brush the dough for pizza with mayonnaise before adding other ingredients and baking it. If you are Italian, please forgive my mom and don’t throw rotten tomatoes at me if we meet. Mayo on pizza seemed completely normal. On the other hand, I know of people who mix mayo into their rice or spread it on fried eggs, and that sounds gross even to me.

The best use mayo finds in the simplest summer dish — salad of cucumbers and tomatoes. As the name suggests, the salad is made of cucumbers and tomatoes, preferably, grown and picked in your own garden and mixed with mayonnaise. Once you are done with veggies, take a slice of bread and dip it into the liquid of mayo mixed with tomato juices left on the bottom of the plate. Wiping the plate with bread and sending those mayo soaked pieces straight to one’s mouth is the absolute best part of summer in the Russian countryside. 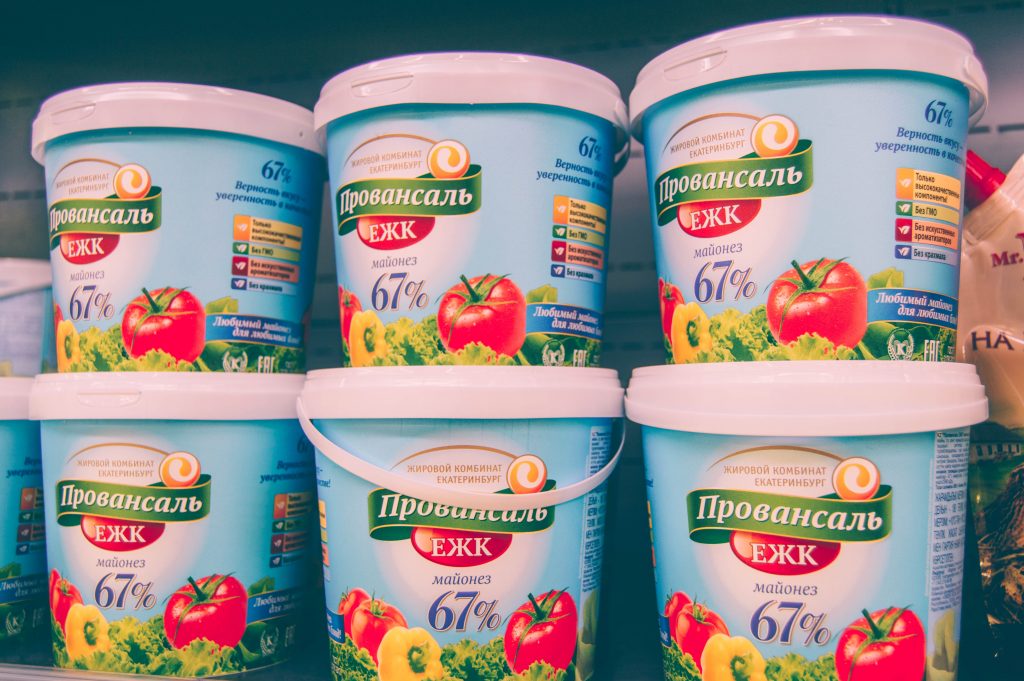 Whether Russian mayo is so good because Russians consume terrifying amounts of it or Russians consume loads of mayo because it is so freaking good reminds of a chicken and an egg problem. According to different sources, an average Russian consumes between 2.5 and 5 kg of mayo per year. I tend to believe the 5 kg sources. In the region of Urals, where I grew up and where the mayo in blue jars is produced, that number is even higher and goes up to 8 kg a year.

A city legend states that Ekaterinburg is included in Guinness World Records book as a city with the highest consumption of mayo per person in the world. The legend is a fake — there’s no official record. But I don’t doubt for a second that people of Ekaterinburg do in fact consume more mayo than other Russians and other nations for that matter. And they only eat EZhK.

EZhK (ЕЖК) is a local fat-processing plant that opened in Ekaterinburg — named Sverdlovsk at the time — in 1959. Initially the plant specialized in producing margarine, but added a line of mayo in the end of 1960s. Their famous Provansal mayo with 67% fat content was first created in 1974 and the recipe didn’t change much since then. The legendary blue jar also goes a few decades back, to 1980s. Although it has gone through some modifications over the past years, the jar is still recognizable: same 250 ml plastic container of light blue color.

Taking up a whopping 48.5% share of the local market, the plant is producing mayo round the clock with only occasional planned breaks for cleaning and repairs. The result is 280 tonnes of mayonnaise a day which — to make it more visual for you — is 1 120 000 blue jars a day. 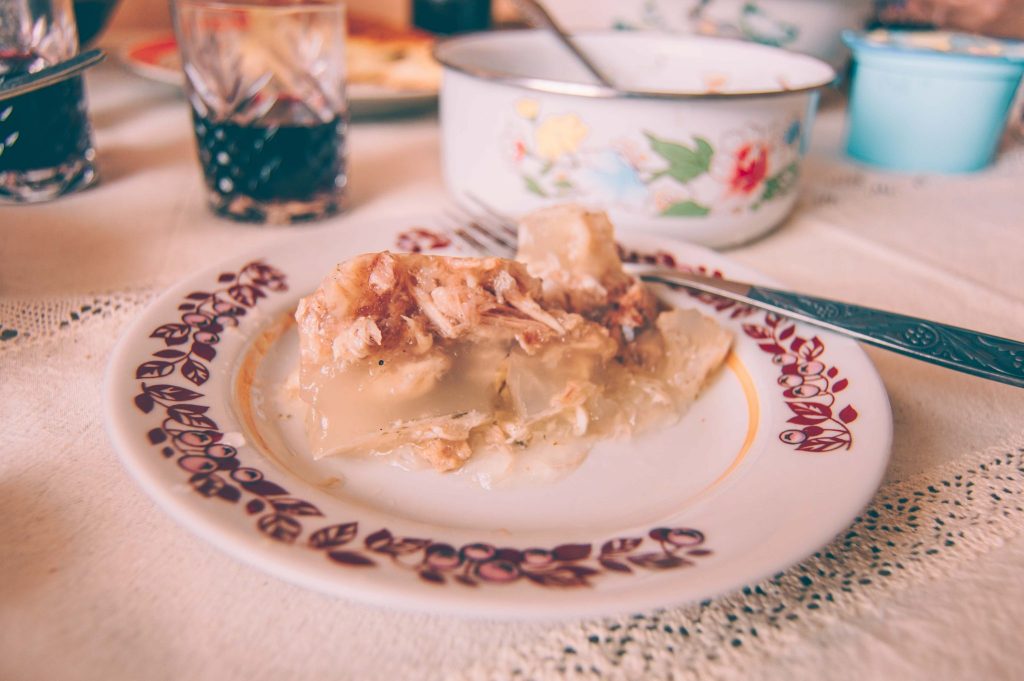 You can spot a blue jar in the background of this kholodets picture. Although we don’t add mayo to kholodets, we add it to okroshka soup that was also on the table.

Mind you, over a million jars daily is normal production yield, but come December, and it spikes one and a half times because what? Because New Year. Every self-respecting Russian woman considers it her duty before family and society at large to drown vegetables in mayo dressing for the New Year table. Since almost every Russian salad is dressed with mayo and New Year table in Russia is pretty much a salad buffet, people start stocking up on blue jars a week or two in advance.

When I say “dressed with mayo” you probably think “add a tablespoon of mayo to ingredients”. No-no-no-no-no. To give you an idea of how much mayo goes into a salad, here’s a recipe for Mimosa, a Soviet classic. Mimosa is a layered salad of boiled and grated vegetables and tuna. Start by arranging a layer of boiled grated potatoes on the bottom of a deep dish. Then add a layer of mayo. Put canned tuna on top and add mayo. Add chopped onions and cover with mayo. Another layer of potatoes and mayo. Follow by a layer of egg whites and what else? That’s right — mayo! In goes a layer of carrots and mayo, duh! Finish off with a layer of boiled and crushed egg yolks. Surprisingly, no mayo on the top. Now one salad is done. Only four or five more to go to prepare the New Year table.

Mayo is the dressing of choice for herring under fur coat salad, for crab (which is really imitation crab) salad, and, of course, Olivier, or as foreigners call it Russian salad. By the way, although Ekaterinburg is not in the Guinness World Records book for the highest consumption of mayonnaise, it did get its spotlight for creating the largest Olivier salad which weighed 3333 kilos (7348 lb).

You see, this is why I believe our nation is undefeated. I mean who in their right mind fights the people who consume 8 kilos of mayo per year and make salads that weigh over three tonnes? That is equal parts hardcore and plain stupid, but either way you got no chance against Russians. And if that is not enough to convince you, watch the video below. Not only do we eat mayo in buckets (I am not exaggerating, EZhK does pack their mayo in small blue-colored buckets with a handle and all), but we think dancing jars of mayo isn’t such a bad idea.

In the halftime of a football match between the teams of “Ural” and “Rostov”, costumed characters dressed as the famous blue jars of mayo danced on the field with a bumble-bee, the mascot of “Ural”. A tweeter user added a dramatic soundtrack from a Russian mystery series “Master and Margarita” in the background, and the dance, that looks very much like a cult meeting, has gone viral.

You’d think that would be the end of dancing mayo jars, but they still keep at it, at every EZhK event, just like people in Ekaterinburg keep eating mayo. If you are ever in my hometown, you know how to find good mayo — just look for the blue jar.