The Real World Behind Instagram Pictures, or Colombo Isn’t Cute

I always stop scrolling when I see a picture of Sri Lanka in my Instagram feed. After living on the tiny island for 3 years I feel compelled to see the country I’ve long considered my home through the eyes of other people. Do they see its beauty, its kindness and deep soul as clearly as I do? What do they have to say about the island I love dearly? Are they happy here?

I was scrolling down as usual when I saw a picture of a colorful fruit stall in Colombo and a famous travel Instagramer in the midst of exotic fruits laughing carelessly. I know this picture. In the sense that every blogger who comes to Sri Lanka takes a picture like this: the fruit stalls look too juicy and full of life to miss out on the opportunity. Damn, I have a picture like that myself and I am not ashamed to admit it. What made me cringe was the caption: “When even fruit stalls are cute!”

I would let it slide if the picture was taken anywhere else in Sri Lanka, but Colombo. Although using the word “cute” in relation to the island with several thousands years of history seems as strange as describing Tolstoy’s “War and Peace” as cute. But the geo tag above the picture clearly showed it was taken in Colombo. If you ever set foot in Colombo, at least for a couple of hours, you know that this city is many things: dusty, noisy, hectic, with never-ending construction, with tuk-tuk drivers following you around and screaming “Come, madam, come!” Colombo is beautiful in its own way like when you walk the busy streets of city center and find a hidden quiet garden behind Barefoot shop. Or when after exploring the insanity of Pettah market you walk to Chatham Street and lay eyes upon colonial buildings that take you from the craze of Asian market straight to the peaceful streets of European capitals. But even in its most beautiful moments, Colombo is anything but cute.

Which makes me wonder, did that Instagramer spend the time in Colombo blindfolded or did she really not care what to write in the caption as long as the picture was pretty? Was it intentional or simply careless? It might seem like a lot to draw from one sentence, but that caption made me realize how few followers would notice the dissonance between the reality and the Instagram photo. How many would believe that Colombo is cute. And how much responsibility travel bloggers and Instagramers should have in showing the world to their audience. 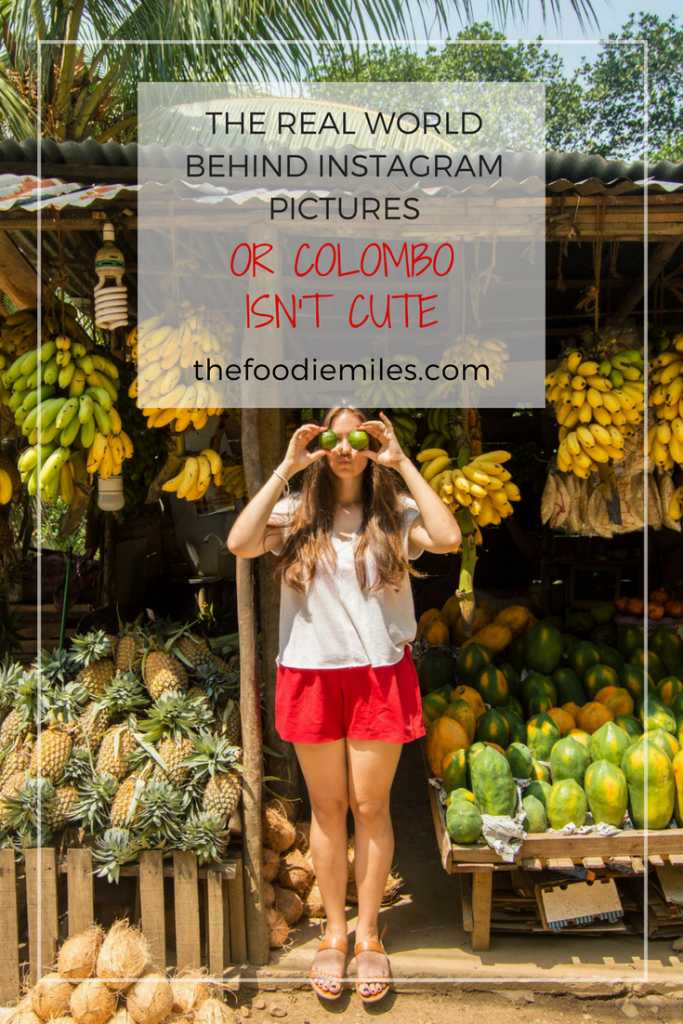 Side notes
5 Years of Blogging: Will I Ever Be Successful?
Side notes
3 Years of Food and Travel Blogging
Side notes
I’ve Been Blogging For Two Years and I Still Don’t Hate It!