“The reason you should go to Las Vegas is because, for only the second time, the second time, ever, they have rebuilt Sodom and Gomorrah. It’s back! And you have the opportunity to see it before it turns to salt.” (Lewis Black) 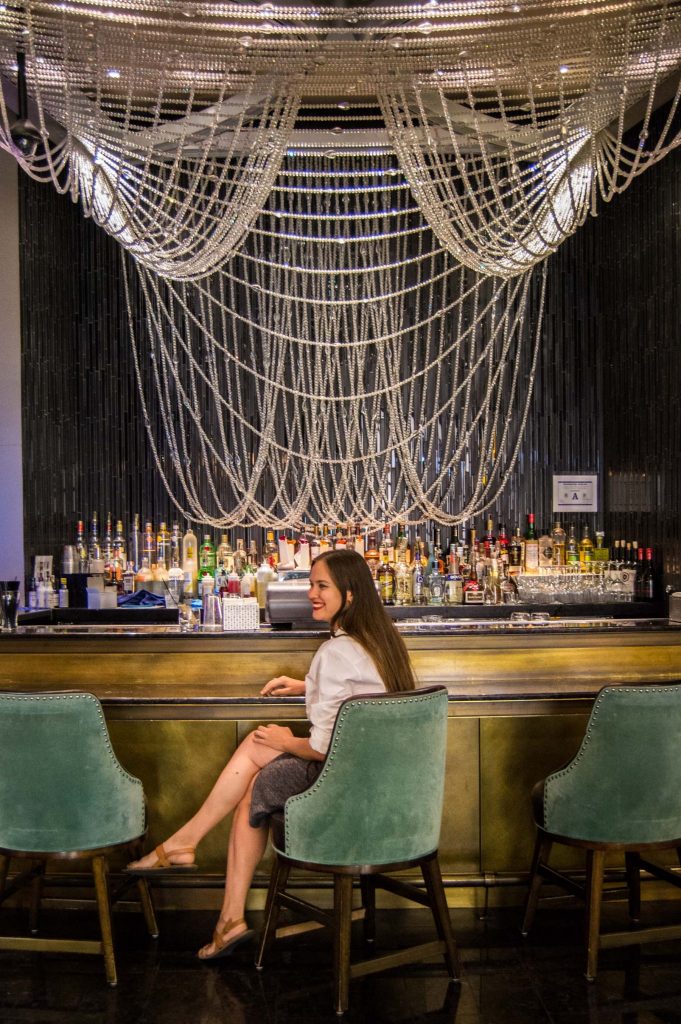 Inside the Chandelier Bar in Las Vegas

“If the flight to Las Vegas is any indication of what my stay here is going to be like, I am terrified” I was rolling my suitcase through McCarran International Airport and making a story for Instagram. The worst flight I’ve ever had didn’t include turbulence or lost luggage, but a lot of drunk youngsters going to Sin City who started to party a little too early, right before the take-off, to be precise. (By the way, look at me saying “youngsters” to describe people who might be a year younger than me if not my own age. That’s how you know you are getting old, right?)

“Hey girl! We are going to the swimming pool in Caesar’s Palace and then having a party in our suite in Bellagio! You should come!” screamed the girl behind me loud enough for the whole plane to hear. Oh no, she wasn’t talking to me, she was talking over my head to the girl directly in front of me. Maybe I could also get an invitation if I wasn’t a judgmental b. and didn’t roll my eyes the entire duration of the flight while the woo-girls were drinking, wooing – as the woo-girls do – and discreetly smoking marijuana. Why was I so annoyed? We were flying to Las Vegas. If anything, they were supposed to be annoyed with me, grandma Yulia. 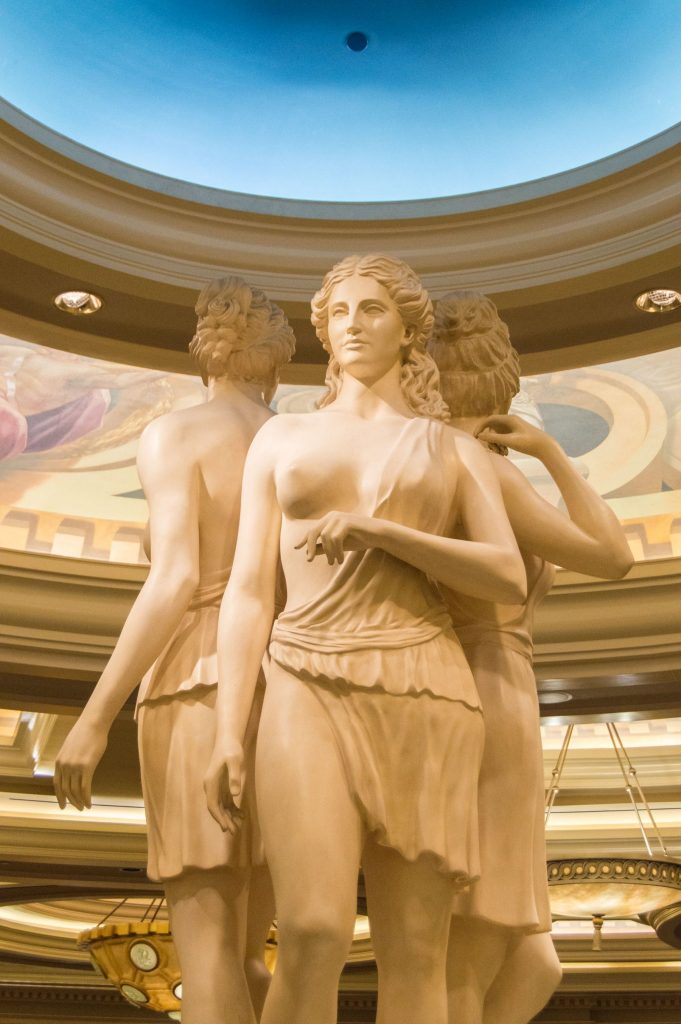 Las Vegas was everything I expected it to be and nothing like it at the same time. I imagined the center of the city with casinos and hotels to be like Times Square, a small concentrated area of blink-blink where you can get around easily. The Strip, Las Vegas’ most touristy street, turned out to be 4 miles long. Walking from hotel to hotel could take hours.

I pictured Las Vegas to be over the top and tacky which it totally was. But at times, you could see true elegance and style. And if you were to leave the Strip (not to mention, take a day trip from Las Vegas), “modesty” and “originality” would be the words to describe the surroundings.

I thought Sin City would be louder. The first time I stepped on Las Vegas Boulevard I couldn’t believe how quiet it was. Maybe because all the fun happens inside, and the hotels don’t let you leave. It took me 30 minutes to find the exit from MGM on the first day. I was so happy to finally walk outside and breath fresh air I didn’t realize the street took me right back to MGM only 10 minutes later. All the roads lead to casinos?

I assumed locals don’t set foot on the Strip, that, just like true New Yorkers stay away from Times Square, Las Vegas locals would steer clear from casinos and gambling. Then I met my Airbnb host who went to play poker every night during my stay in the city and returned at four in the morning.

I knew there’s more to Las Vegas than the Strip. I didn’t know I would really like it. The Uber driver who took me for breakfast away from the Strip smelled of weed and kept telling me how he loved Las Vegas because you could do anything there. “Anything… like what?” I was confused. “Anything!” that was as much clarification as he was going to give me. “But you can do anything… anywhere… Am I missing something?” I didn’t say that last one out loud. I got out of the car in Main Street to explore the non-touristy parts of Las Vegas and see how far I could push my luck in doing “anything”. 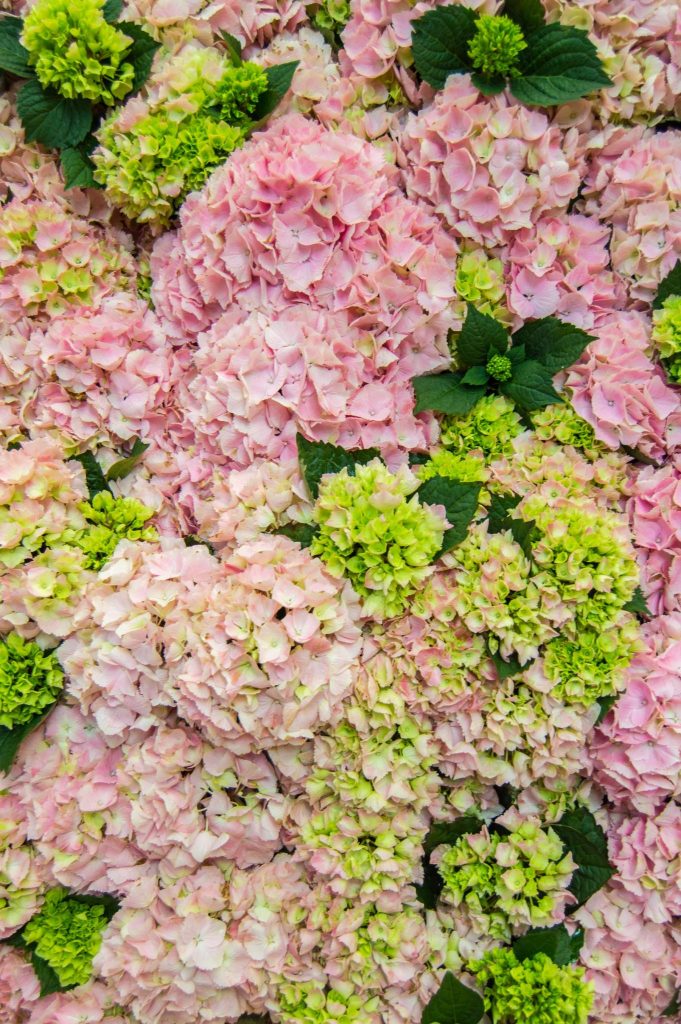 Inside Conservatory and Botanical Gardens in Bellagio Hotel and Casino

But three days went by and I didn’t really do “anything”… you know “anything” in the sense my Uber driver gave to this word. I didn’t get drunk and embarrass myself in front of strangers. I didn’t lose thousands of dollars, not even hundreds. I lost a ridiculous amount of $14 which was more than covered by my husband’s win.

The whole time I felt that I wanted to see Las Vegas, but I didn’t want to participate in it, if it makes sense. I wanted to watch it unfold in front of me like a performance, but in no way did I wish to take part in the show, not as one of the artists, not even as one of the spectators pulled randomly onto the stage.

Anywhere else I always jump head first into the busy crazy unfamiliar life of the new city. In Las Vegas, it felt strange not to want to do that. But it would feel even stranger if I did. I guess I had a concerned face thinking of it while walking on the Strip, because a passerby looked at me and said: “Smile! You are in Las Vegas!” “I am in Las Vegas, damn it!” I thought to myself. I smiled back at the guy and went into the dimly lit casino to burn through my $14 on slot machines.

Streets and Eats is a series of posts about places that I visited only briefly.  I don’t feel knowledgeable enough to write a full guide, but I still want to share my best finds. Look at it as a freestyle visual guide to the city that will, hopefully, inspire your visit and give you a few random ideas of what to see and where to eat! 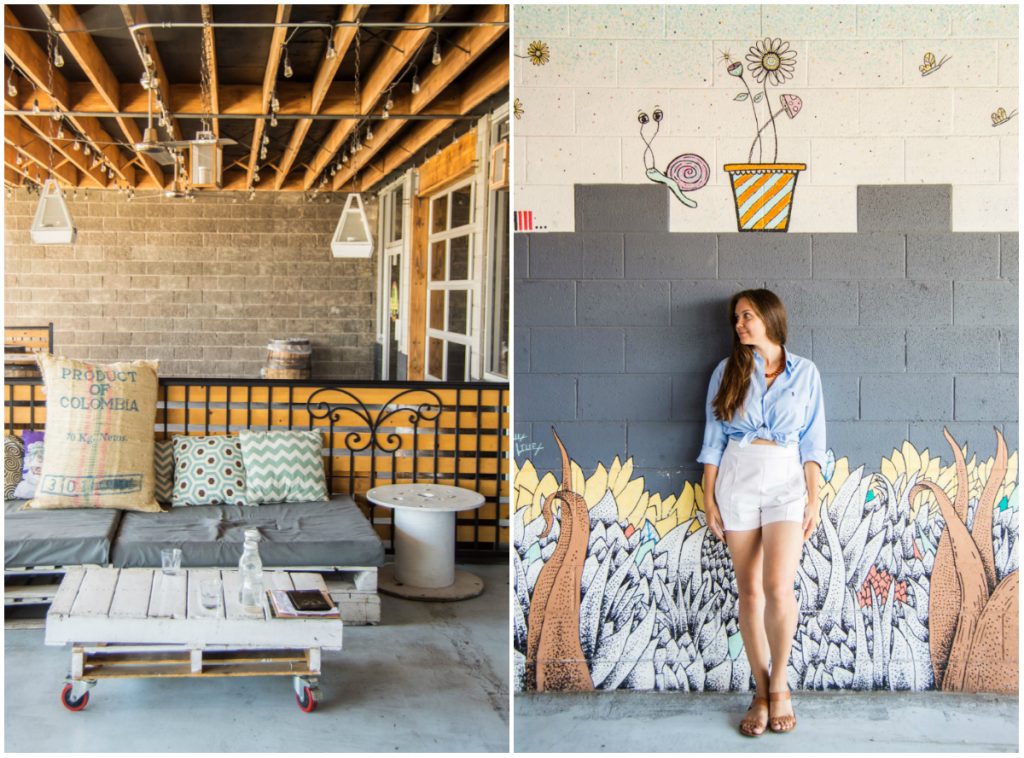 Makers & Finders is one of the best coffee shops in Las Vegas, located in the Arts District and serving food inspired by South American cuisine. Perfect spot for breakfast if you are planning to spend a day exploring downtown. 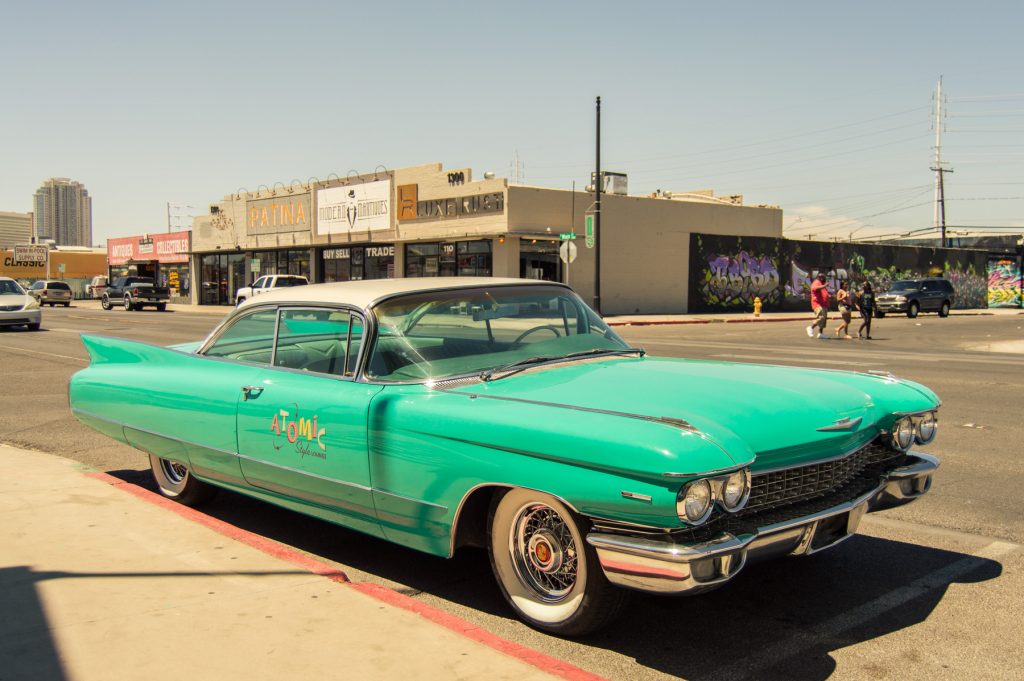 Away from the hustle and bustle of the Strip, downtown is one of the best areas to stay in Las Vegas. 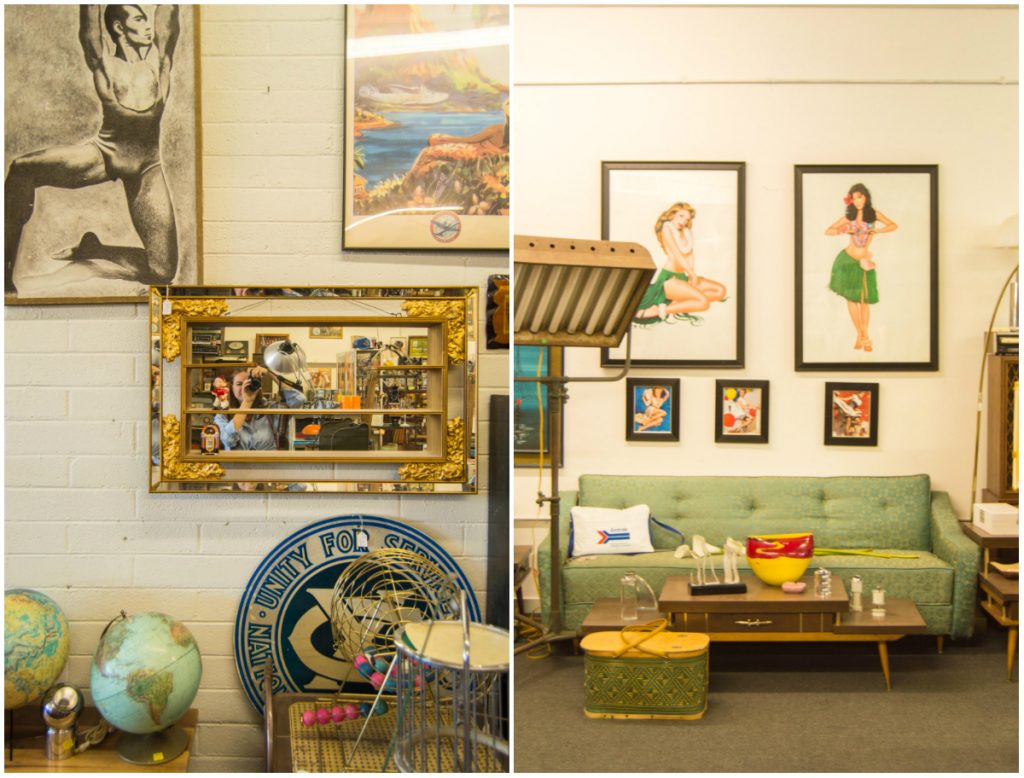 Main Street is popular for its many vintage and furniture shops. Walk down the street and stop by Retro Vegas, Patina Decor, and Clay Arts Vegas 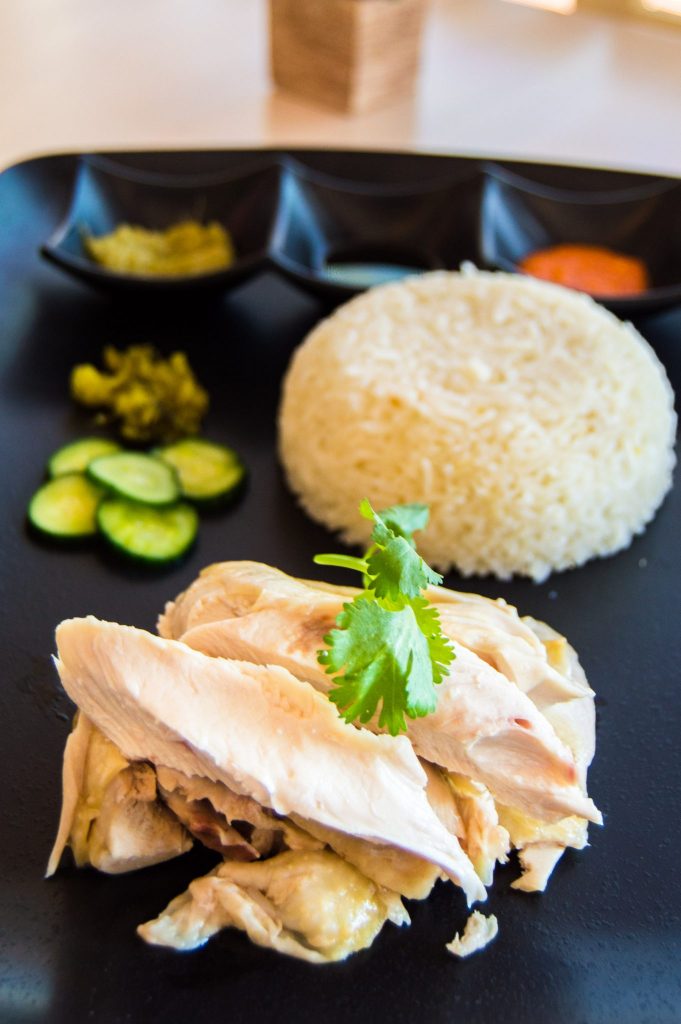 The best meal I’ve had during my short stay in Vegas. Possibly, even the best chicken dish I’ve ever had. Hainanese chicken rice from Flock and Fowl is one of those things you eat with a look of surprise on your face, unable to believe that something so simple as braised chicken can be so good. Served with house made ginger scallion sauce, soy sauce and chili. 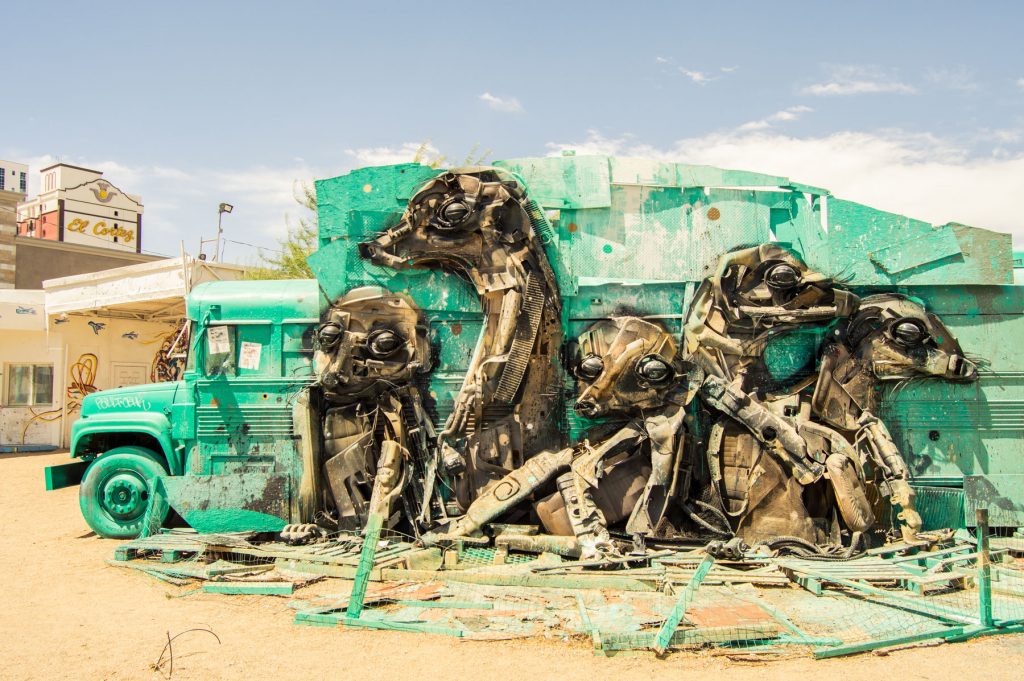 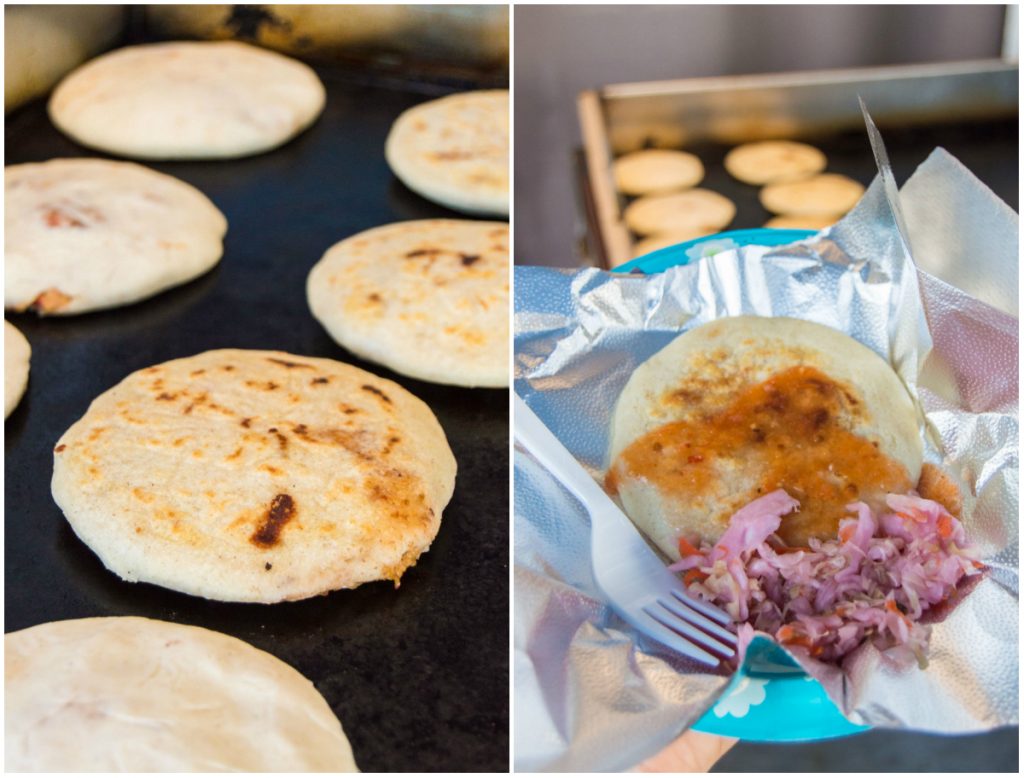 The very first thing I ate upon arrival to Sin City. Pupusas are a classic Salvadorian dish I accidentally found in the street while waiting for my dinner reservation. Because what else to do while you are waiting to eat but eat? 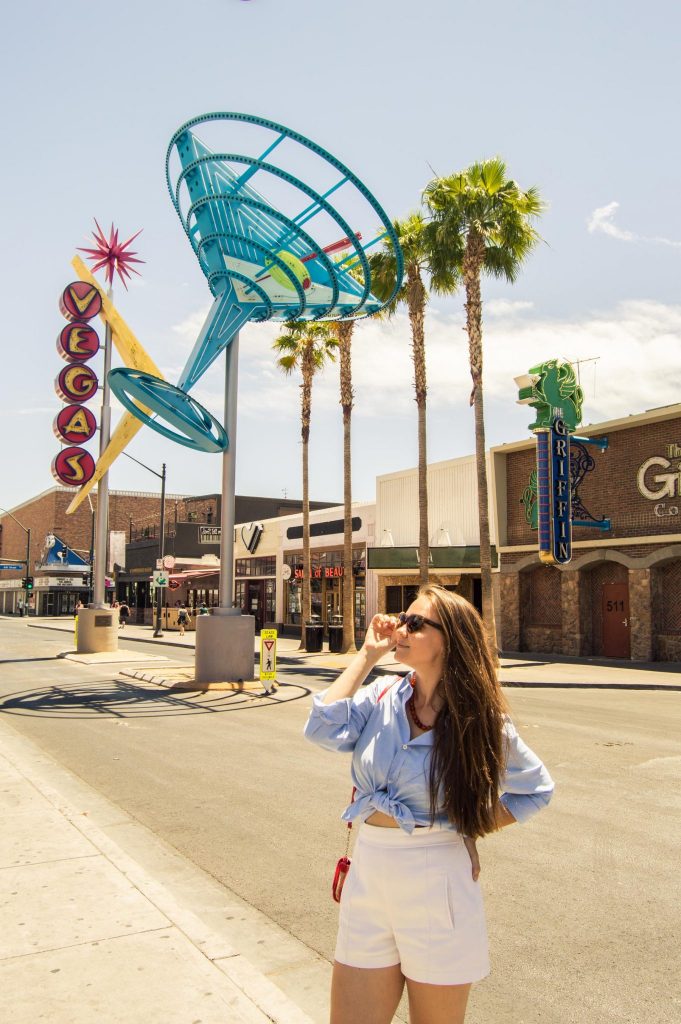 Fremont Street, one of the oldest streets in Las Vegas 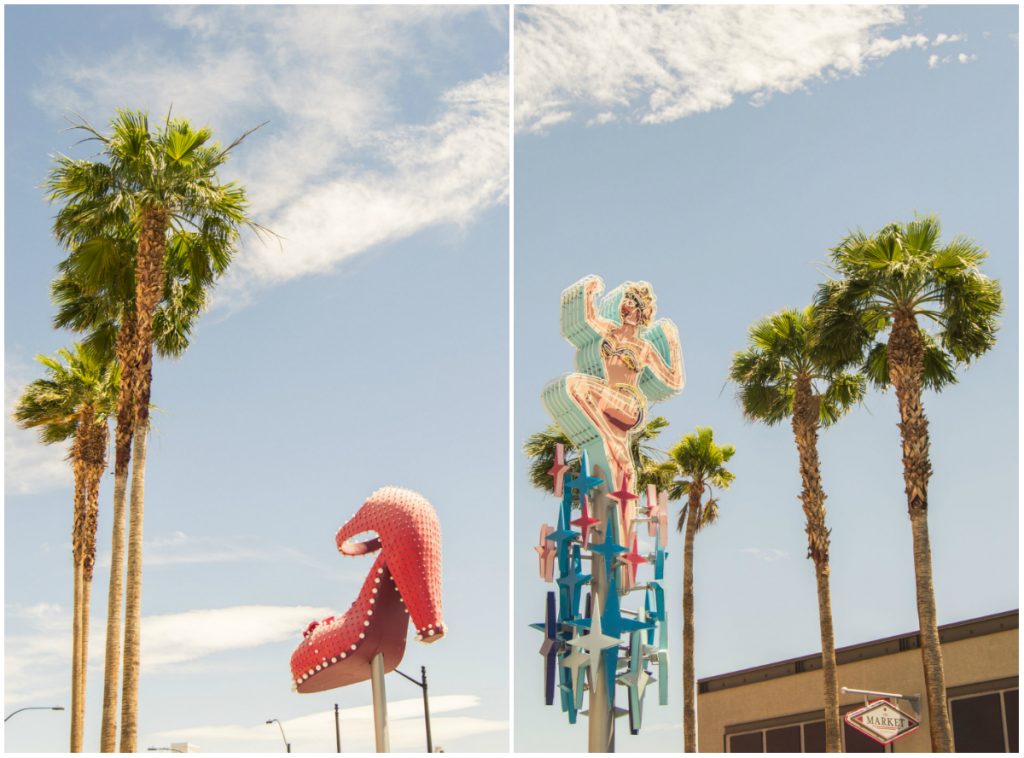 Fremont Street is also know as the Old Las Vegas Strip. It dates back to 1905 when Las Vegas itself was founded. 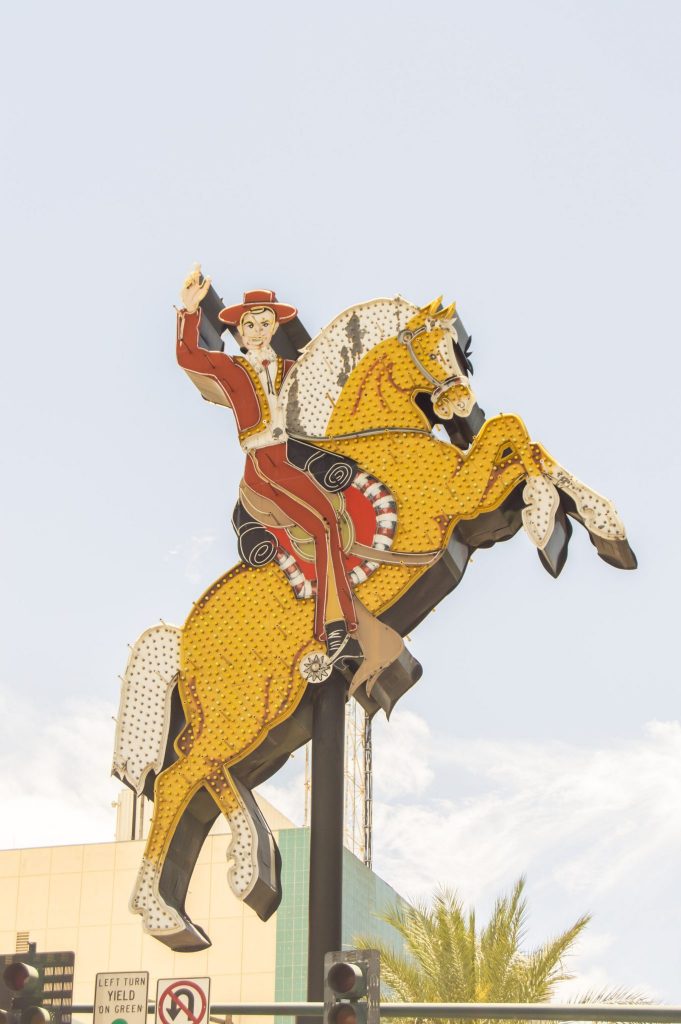 Neon signs are essential part of the city’s image. 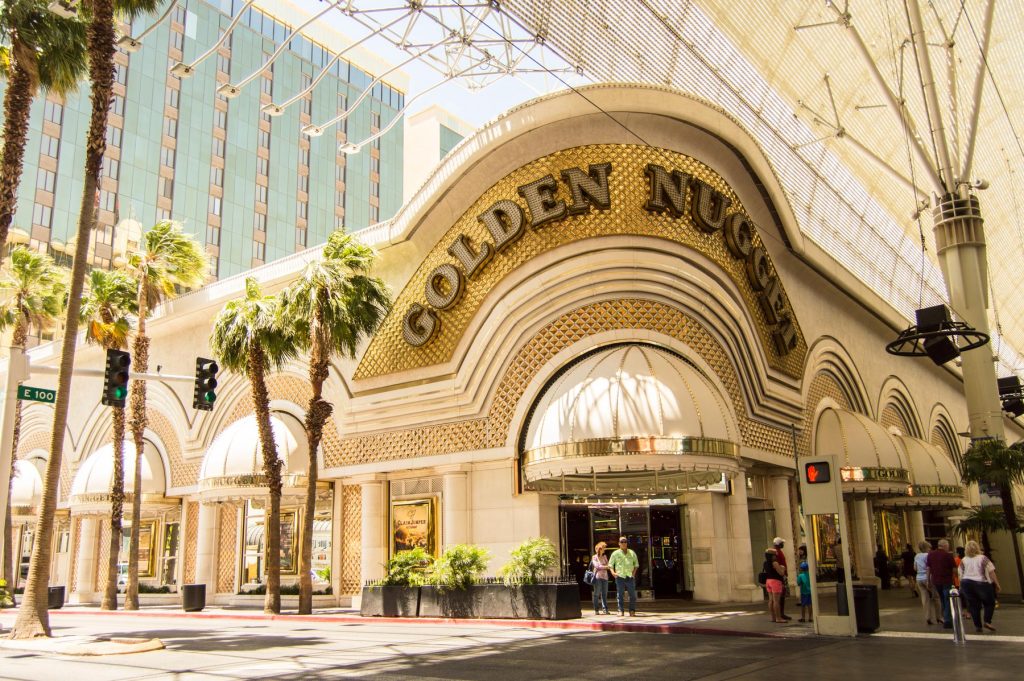 Golden Nugget, one of the oldest casinos in the city and the largest in downtown Las Vegas. 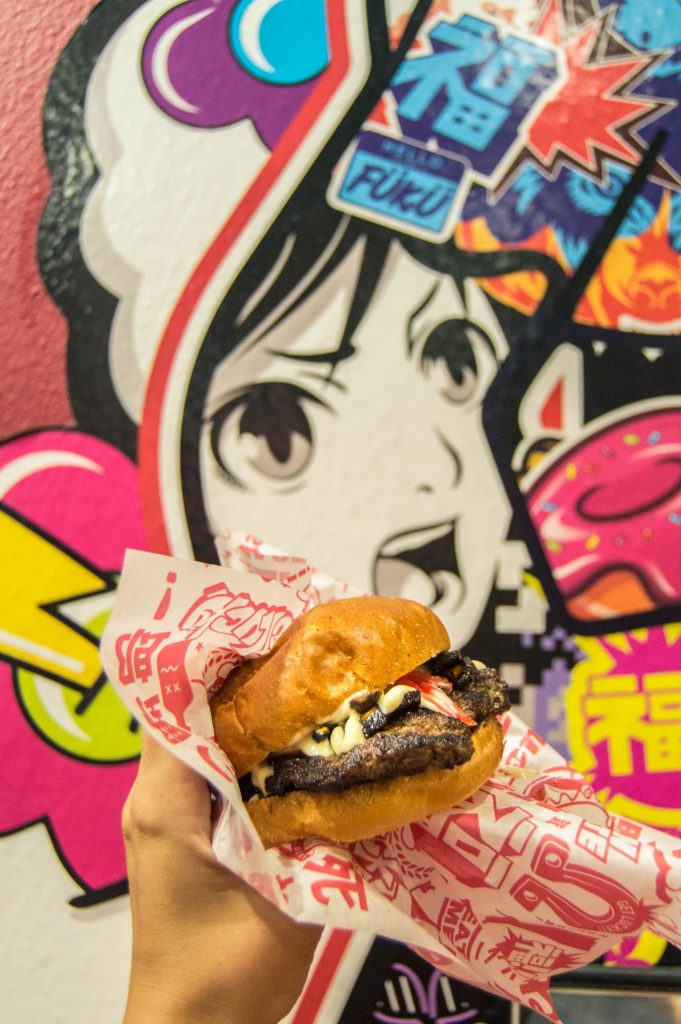 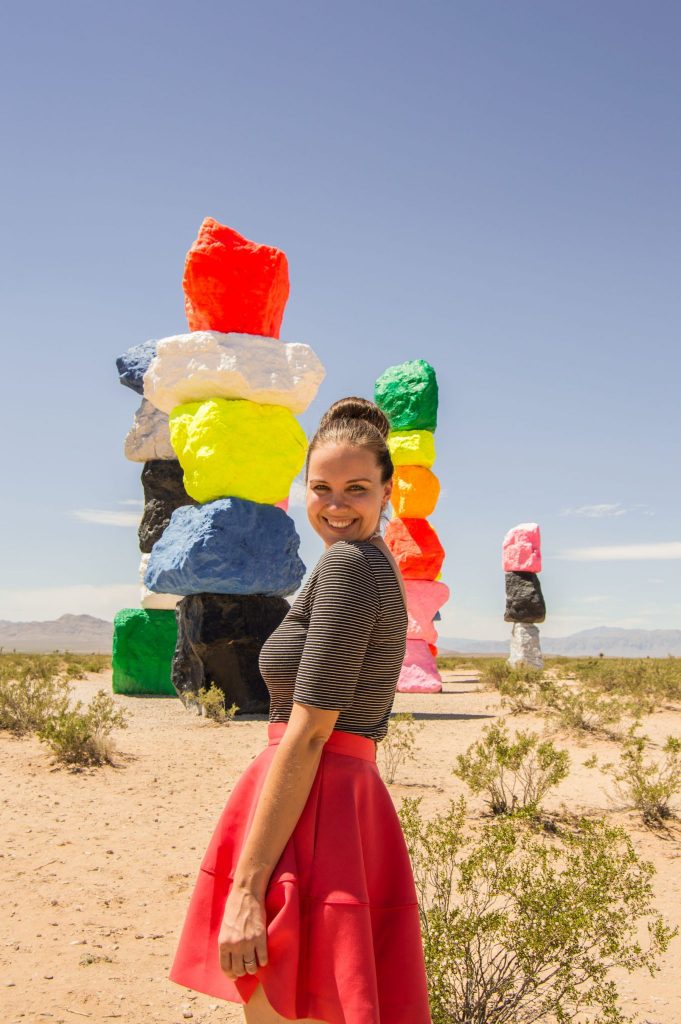 One of the most unique things to do in Las Vegas is visiting Seven Magic Mountains, an art installation made of colorful boulders stacked on top of each other. The stacks stand over 30 feet tall in the desert of Nevada, only 20 minutes’ drive from Las Vegas. 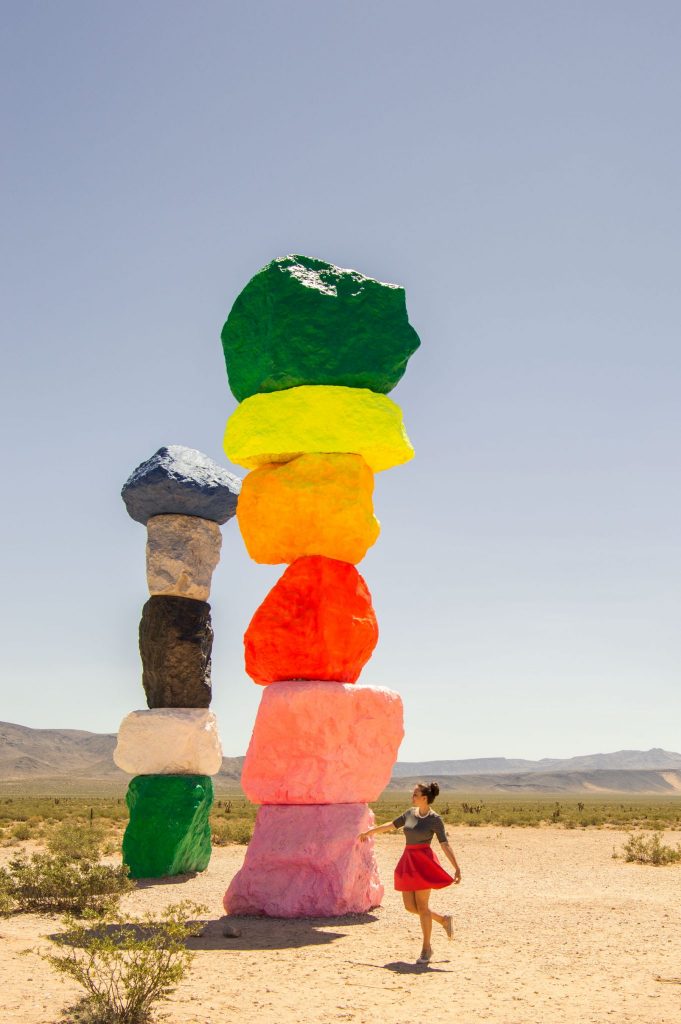 “A creative expression of human presence in the desert”, this installation was made by Swiss artist Ugo Rondinone and will stay here only for two years.

PS. After writing this post I realized that the only pictures taken on the Strip are the first 3 pictures. I guess I was more infatuated by off-the Strip-experience.

What else to read about Las Vegas?

For tips on how to do Las Vegas on a budget check out this post, for the ultimate bucket list of 101 things to do in Las Vegas read this, and here you can find all the things NOT to do in Vegas. 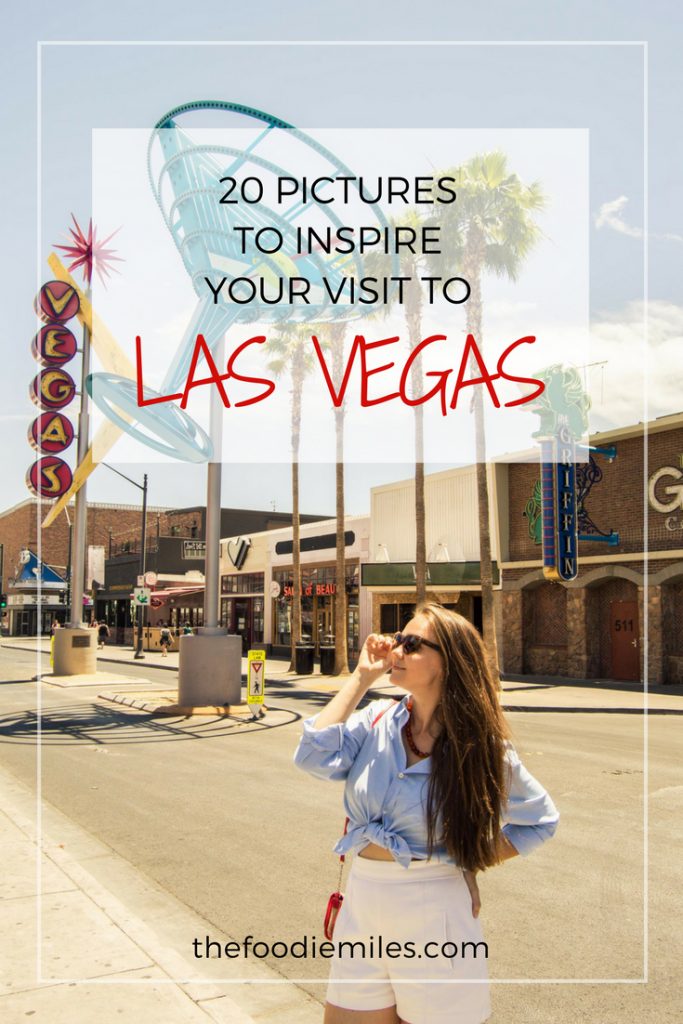